Green Bay Switching To A 3-4

Share All sharing options for: Green Bay Switching To A 3-4

A sentence as unforseen as the Cardinals' run to the Super Bowl. But, it's true. Dom Capers' hire has more or less led to McCarthy's decision to switch Green Bay's defense to a 3-4 alignment.

(Tangent #1: For the record, I prepared a post for this move when the Packers were courting Mike Nolan. It was a good post. A great post, in fact. But I foolishly deleted the draft after Nolan got hired by Denver. So thanks for sticking it to me, Green Bay. I'll do my best recreating it from memory.)

(Tangent #2: Fitting that news of such change comes at a time when the country itself is undergoing a fundamental change. I just want to say that, no matter what your political affiliations, you have to respect how President Barack Obama has energized the country. He's a breath of fresh air when America needs it most. Like with any politician, I just hope he's able to follow through on his campaign promises.)

Green Bay has run a 4-3 for as long as I remember, and certainly longer. It's strange to imagine a change to a 3-4, but we might as well start now. Take a look...at the future! 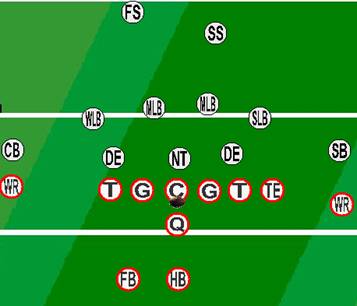 I know, I know, it's weird and foreign and scary to all of us. But if it's gonna happen, me might as well brace for it. Over the course of my internet wanderings, I wandered across an excellent dissection of the 3-4 defense at Washington Husky Sports, back when the college team was considering a switch to the 3-4. A quick rundown of what the front seven looks like in a 3-4 is as follows:

So, position wise, it's not too hard to fill. You need a big, strong nose tackle (NT) to control the point, and two strong ends to penetrate on both sides. The inside 'backers are also responsible for stopping the inside run, as well as covering middle pass lanes. The outside linebackers are the "stars" of the system, generating most of the pass rush on blitzes, containing outside runs, and covering the short zones.

There are some significant advantages to a 3-4 defense. It is extremely versatile; the extra linebacker on the field is adept against both the run and the short pass. It is also flexible, in that either side of the field has one defensive lineman and two linebackers to occupy between two and four blockers, allowing the other linebackers or safeties to flow to the ball. Most importantly, however, is that the 3-4 gives a significant strategic advantage when it comes to blitzing.

The ability to disguise a blitz is central to the 3-4's success. When ran correctly, it can confuse the quarterback's adjustments, as well as the offensive line's protection calls. Look what happened to Joe Flacco against the Steelers, or Chad Pennington against the Ravens. Granted, Peyton Manning or Tom Brady might have more success, but the other QB's in the NFC North are certainly fluster-able by a 3-4 setup, something that the Packer pass rush has struggled to do.

Pretty simple, right? In theory, it is. However, the personnel required is vastly different from that of the original 4-3. In a nutshell, they are bigger. Much bigger. The defensive linemen need to be 315+ pounds in order to handle the punishment of constant double-teams from offensive linemen, tight ends, and blocking backs. The outside linebackers need to be 260+ pounds in order to take on offensive tackles one-on-one. The inside linebackers can be smaller, but not by too much lest they run the risk of being unable to shed lead blockers and disrupt running backs.

So just plug in a couple of big guys and you'll be set, right? Wrong! Not only must a 3-4 defense consist of bigger players, but they also need to be fast. Defensive linemen need to be quick enough to get off the ball and penetrate into the backfield, disrupting running lanes. Outside linebackers need to cover tight ends and running backs and possess the arsenal of pass rush moves to get to the quarterback. Inside linebackers need to rush the middle on blitzes and have sideline-to-sideline range to run down ball carriers.

Wow. Sounds like you need a very specific group of defenders in order to use a 3-4 effectively. If you have the right people, like Pittsburgh or Baltimore, it works great. If you don't have the right people, like Houston or San Diego (at least after Shawne Merriman went down), it doesn't work at all. So, one of the main questions is: Does Green Bay have the personnel to make a 3-4 work?

There's three main spots to fill here; two DE spots and the all-important NT position. The three standout names here are Aaron Kampman, Cullen Jenkins, and Ryan Pickett. Jenkins is a former DT who, until his injury, showed he was versatile enough to handle any position on the line. If he can come back from his injury and bulk up a little bit, I think he'd make a fine 3-4 DE.

Ryan Pickett is the closest thing to a nose tackle that Green Bay has. He's big enough at 330 lbs, but I have my doubts as to whether he is quick enough to fill lanes and durable enough to withstand a season's worth of double teams. Considering NT is the most important position, I'm not exactly comfortable with leaving it up to PIckett. But, between Colin Cole (not strong enough), Johnny Jolly (not consistent enough), and Justin Harrell (not healthy enough), who else can do it?

Aaron Kampman has established himself as an excellent 4-3 defensive end. He may not be Jared Allen or Julius Peppers, but he's arguably the best defensive lineman on the team. He, like Jenkins, would have to bulk up from his "svelte" 265 to stay on the line. However, there is some chatter possibly making the switch to OLB. I'm not sure if it will work, but if Kampman does switch positions, it will be up to Jeremy Thompson, Mike Montgomery, or a new addition to take his spot at DE.

There are two main spots to fill, both of which are relatively identical to one another. The only "true" inside linebackers on the roster are Nick Barnett and Desmond Bishop. Both of them have traits that appeal to becoming a 3-4 ILB. Barnett is a fast player with excellent speed and can range from sideline to sideline. Bishop is a strong player, a decent tackler, and is good at shedding blocks. Unfortunately, what one is strong at, the other is weak at. Bishop is slow for a linebacker and gets juked way too easily, and Barnett tends to get swallowed up by blockers far too often.

One possibility is moving A.J. Hawk inside permanently. He filled in for Barnett after his knee injury, and he played inside at Ohio State. He, like Barnett, has excellent range and (I would argue) is a better tackler than Nick. However, he had a major dropoff in 2008 and had a lot of trouble dealing with blockers, a glaring weakness in a 3-4. Whether to use Barnett and Bishop, Barnett and Hawk, or perhaps Hawk and Bishop (thus moving Barnett to the outside, where his speed might be better used) is a decision I'll leave up to Dom Capers.

As I alluded to before, OLB is the glamour position in a 3-4 defense. Think Terrell Suggs, Adalius Thomas, or DeMarcus Ware, and you've got what you need in a 3-4 OLB; a player who is able to blitz the edge, get past the tackle, and sack the quarterback. And when they're not doing that, they need to contain the outside run and cover short passing lanes.

Who on Green Bay's roster could fill such a role? Currently, the main OLB candidates are A.J. Hawk, Brady Poppinga, and Brandon Chillar. Hawk, as I mentioned before, might be better suited for the inside, but his speed might keep him on the edge. He is supposedly a good pass rusher, but hasn't shown any ability in that arena since arriving in Green Bay.

Poppinga and Chillar are both good at where the other falls short. Poppinga, a former DE, is a good pass rusher but a lousy cover defender. Chillar is an excellent cover man but can't get within arm's reach of the QB. Other teams will key in on this and simply run at Chillar's side and slide protection towards Brady. These two are nice players in a 4-3, but I don't see them succeeding in a 3-4.

So those are my thoughts on how Green Bay stacks up to the paradigm of a 3-4. In short, I don't like it. I don't think our players are strong enough up front to handle double teams, and I don't think our linebackers are disciplined enough to execute their assignments. I love the 3-4, but I can't justify taking a defense that was 26th against the run and replacing a defensive lineman with a linebacker. I just can't.

Mike McCarthy has a different perspective. Obviously, he's much more optimistic about it:

"Our starting point will be the 3-4. I'm a big believer in the 3-4 defense for a number of reasons. From an offensive standpoint it creates targeting problems. It gives you an ability to utilize your personnel. That doesn't mean we won't line up (ever) in a four man front. We'll move in and out of both four man and three man fronts."

Now, why is he so confident? Aside for reassuring everyone that they won't abandon the system the team has used for decades, it's for the same reason I'm not completely writing off the 2009 season right here and now: Dom Capers. If you're going to implement a 3-4, there aren't many better candidates for the job. Capers worked in Pittsburgh as a DC under Bill Cowher, and he perfected the 3-4 when he took it to Carolina in 1995. He took an expansion team and made them a 12-4 squad that upset the Dallas Cowboys before losing in the NFC Championship game to Green Bay, and he did it by using the 3-4 defense. However, his year in New England will undoubtedly have given him insight into one of the most versatile and complex systems in the NFL, knowledge which will certainly help the transition.

In any case, acquiring new players in the offseason is the next step towards making the whole thing work. Whether it's signing a big-time free agent like Albert Haynesworth, Julius Peppers, or Terrell Suggs, or drafting players that will fit the system, there's no question that the current roster won't be the same roster we see in training camp. In conclusion, the Packers are moving to the 3-4. I don't like it, but the players and coaches do. What do the fans think?