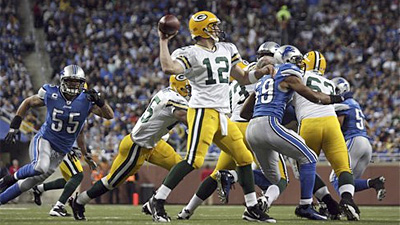 In his 5th NFL season, Aaron Rodgers has made improvements to critical parts of his game, and that is the big difference for the turnaround from a 6-10 season in the 2008 campaign. He's cracked the record books - becoming the first NFL player to pass for 4,000+ yards in his first two seasons as a starter. He currently stands at 4th in the NFL in passing efficiency, just ahead of Peyton Manning (yes, that's right, here's the link). So where has Rodgers improved drastically from his rookie season to this season?

It's important to note that Rodgers has been very good through his entire career at not costing the Packers points in the red zone. He has yet to throw an interception in his career inside the 20 yard line. 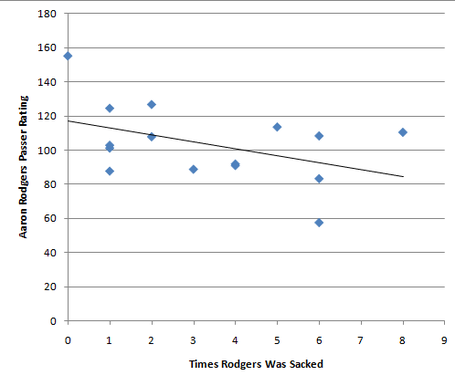 Of course, a big part of the Packers' recent success has been the consistency of the offensive line increasing (regular starters), and a decreasing sack rate.

The graph to the right shows that there is a clear decreasing trend in Aaron Rodgers' passer rating this season when the number of sacks have increased.

Over the first half of the season (8 games) Rodgers was sacked an average of 4.6 times per game. Consequently, the Packers were a dismal 4-4.

Since the Packers have gone 6-1 over their last 7 games, the sack rate has decreased to 1.8 per game.

Even with relatively poor pass protection, averaged over the entire season, Rodgers has been one of the elite passers in the league. Perhaps this is something Ted Thompson should take note of - get some elite offensive linemen in the draft or through free agency. If Rodgers has time, he has proven he can absolutely pick a defense apart.

Again, imagine how good Rodgers could be with an elite offensive line - scary, right? Still, one has to give credit where credit is due - and the increasing stability on the offensive line has helped improve the sack rates. Encouraging sign:  the Packers held one of the best pass rushing defenses at bay recently - the Steelers (4th best, 1 sack allowed).

Keeping Aaron healthy and protected going into the playoffs will be a major key to the Packers success. The defense is generally a known commodity. We need the offensive line to show up and play well.