Quick Glance Around the Division

Share All sharing options for: Quick Glance Around the Division

It has been a long time since my last post.  Partly because I'm in my last semester as an undergrad and I'm trying not to screw it up, partly because Brandon has been tearing it up with his free agent and draft prospect analysis, but mostly because February is so boring in the NFL.

Yes, the Packers are making the move to the 3-4, but we've covered that, and it's slow process.  We have free agency starting up, but a) most of the players we wanted were either franchised or signed extensions, and b) Ted Thompson doesn't really dig free agency (at least not historically).  The combine happened, but the main story was Crabtree's injury and Andre Brown's stupidity.  The draft is still way in the distance.

I'm sure that people who work for the Packers' organization are certainly busy.  But for us lowly fans?  Other than speculation, there's no real action happening for us to talk about.  So let's take a lap around the block and talk about the other teams in the division briefly.

I approached this post a little differently.  Whilst chatting with one of my Wisconsin homeboys, I posed three statements to him (one for each other team in the NFC North) and had him give me his immediate reaction.

Reaction: "Meh.  They're still the Lions; Matt Millen made sure they'll be terrible for a few seasons at least."

Sad, but true.  The Lions' roster is absolutely devoid of any significant talent not named Calvin Johnson.  Even Dan Orlovsky is testing free agency.  Dan Orlovsky!

That said, if anyone is going to at least start the process of returning Detroit to mediocrity, Jim Schwartz has surrounded himself with good people to make it happen.  Scott Linehan, especially, is able to use whatever is available to him to craft a decent offense.  Not like when Mike Martz insisted on using a team with an average quarterback and porous offensive line to carry out his borderline-insane schemes.

Honestly, I want Detroit to get better.  I want them to be competitive.  Confound it, I want to worry about Detroit twice a year.  Nobody deserves to suck as much as Detroit has.  Except maybe Minnesota and Chicago.

Reaction: "Mike Brown, when healthy, is an excellent safety.  Meaning he was excellent 15% of the time."

Chicago is a bit of a mystery on defense.  They have solid players, but they just don't play as a unit on a high level.  Are they getting old?  Is the defensive gameplan in need of tweaking?  Are teams simply able to scheme against them better?

I think that the majority of the problem has been injury-related, which is why I made Mike Brown the example.  His release reflects the organization's recognition that you can't succeed if your best players are on the sidelines.  Does that mean that Urlacher, Vasher, Ogunleye, and company are on the way out, too?  No, but it does mean that the Bears are going to be more careful about the injury history of potential additions.

Statement: "The Vikings made a trade for Sage Rosenfels."

Dated and unfunny movie reference aside (although Air Bud: Spikes Back was truly a masterpiece), I think Evan's reaction is similar to most Vikings' fans.  Yes, after Frerotte hurt his back, Jackson showed flashes of what an NFL quarterback looks like.  In the last four games, Jackson went 3-1 and threw for 740 yards on 57/89 with eight touchdowns and only one interception.  The yardage totals are a little low, but you simply can't argue against that kind of efficient production.  People in the Twin Cities were cautiously optimistic about their young, enigmatic quarterback.  It seemed that he had finally turned the corner.

Unfortunately, they had reason to be cautious.  In the first round of the playoffs, the division champion Vikings fell to the Philadelphia Eagles and Tavaris Jackson had a very forgettable performance indeed: 15/35 for 164 yards and one interception.  This was truly the Tavaris Jackson we all grew to know and love; an exceptional athlete who displayed poor mechanics and a poorer handle of his position.

So what's the answer to the Tavaris Jackson question?  Do you keep him as the starter and hope that he continues the type of play that he put out at the end of the season?  Or do you bring back Frerotte, the veteran who helped guide the team to an 8-3 run?

Turns out that the Vikings' answer is none of the above.  Instead, they're willing to give up a 4th round pick...for this guy: 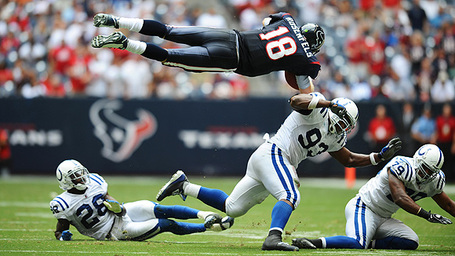 Don't be fooled by how awesome this picture is; Sage Rosenfels promptly fumbled the ball and the game was lost.  It really is a snapshot of the RosenCopter's career: he tries very hard not to suck, but he can't not suck.

My initial reaction to the reported trade was less anti-Rosenfels and more anti-Vikings.  Let me just say this: if your training camp features a battle between Tavaris Jackson and Sage Rosenfels, and you expect the winner to lead your team to the playoffs and beyond, you are most certainly delusional.

If it wasn't Minnesota, I would feel extremely bad for players like Adrian Peterson, Antoine Winfield, Kevin Williams, and Jared Allen.  These guys are premier players that are among the best at their positions.  But would you expect their team to actually go anywhere in the playoffs behind Sage Rosenfels?

All in all, I'm not really scared of anything that the Bears, Vikings, or Lions are doing in the offseason.  I mean, it's not like we have to worry about any dynamic new playmakers in the division.  At least not until after the draft.