Who Wants Cotton Candy? The Carnival That Is The Packers' O-Line

Share All sharing options for: Who Wants Cotton Candy? The Carnival That Is The Packers' O-Line

"I’ve made this statement before — I want to get off this roller coaster or merry-go-round that we’ve been on of moving our offensive linemen at so many positions, but we haven’t made that decision as far as exactly where the young guys will go."

-Mike McCarthy on the offensive line

This quote from Green Bay's fearless leader leaves me torn; I love roller coasters, but I hate merry-go-rounds.  But then I remember I'm not actually at the county fair, and everything snaps into focus.

The offensive line was the biggest problem for Green Bay's offensive production in 2008.  Aaron Rodgers was not the problem, nor the receivers, nor the playcalling, or anything else.  Green Bay's problem was creating rushing lanes; without establishing a credible ground threat, the Packers could not control the clock or safely move the chains.

As we can see, the run game last season was as efficient as Dunder-Mifflin, Scranton.  How, then, is McCarthy going to avoid a repeat in 2009?

I like to think that Mike McCarthy is a man of his word.  And since his words above point towards finding a continuous solution to the revolving door on the line, I believe that's exactly what he's going to do.

Green Bay currently has fourteen players on the roster at the three offensive line positions.  Of those fourteen, only three (Chad Clifton, Daryn Colledge, and Jason Spitz) have established themselves as bonafide starters, and although Colledge and Spitz don't yet have a firm grip on any one position, they are getting extended looks at left guard and center, respectively.

From that, we can determine that Clifton and Colledge are a lock to play LT and LG, and Spitz is a good bet to win the C job.  Even if he doesn't he'll just slide over and play RG.  This still leaves two holes on the line, including the void left at RT with the assumed departure of Mark Tauscher, accelerated by an ACL tear late last year.  Let's take a look at who might fill these holes.

Allen Barbre, as Brandon alluded to a while back, is the early favorite to win the RT job in 2009.  I can certainly understand why the team is giving him a shot at the starting position, because Barbre is the physical prototype of an offensive tackle:

Has a thick upper body, with broad shoulders, thick calves, solid midsection, long arms, large hands, big bubble and natural strength … Comes out of his stance with outstanding explosion to shock a lethargic defender … Has the loose hips to change direction and plays … Generates good force behind his hand punch to deliver pop on contact.

Yikes.  With a description like that, it sounds like Scout.com has some...unconventional tastes.  Although who doesn't love a big bubble?  Anyways, you'd think that Barbre's tools would lead to his taking the division by storm...but that hasn't happened yet.  Why?  Well, let's let Scout.com drop the bomb:

With some patient coaching, he could develop. It is obvious the athletic talent and quick feet are there. Now, he needs to work on the mental aspect of the game.

Well said.  Barbre's numerous mental errors and failures in execution have kept him on the sidelines for most of his career.  And, as Brandon said, I have a feeling they're going to keep him there in 2009. 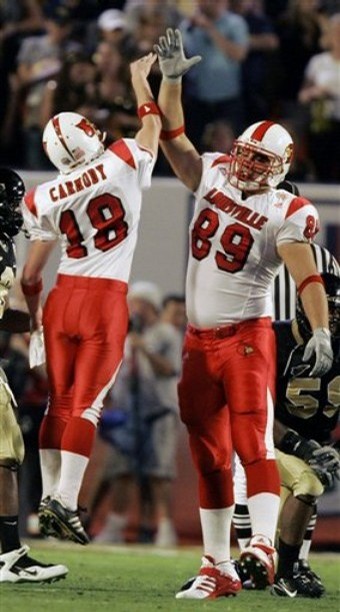 Any Douglas Adams fans out there?  Remember the part where Ford and Arthur are ejected from the Vogon ship and the narrator says this line?

"Space," says the introduction to The Hitchhiker's Guide, "is big. Really big. You just won't believe how vastly, hugely, mind-bogglingly big it is."

Well, replace "space" with "Breno Giacomini," and the phrase still fits.  Because Breno Giacomini is big.  Really big.  6'7" big.  Not only that, but he's strong and, thanks to his experience playing TE, surprisingly agile.

So why hasn't he turned into Jonathon Ogden?  Because he's still learning the position.  Giacomini is a promising player, but he needs to learn and refine the technique needed to play offensive tackle in the NFL.  I have faith in Green Bay's coaches; so long as he puts in the work, I expect to see Breno starting at RT before the end of 2009.

Scott Wells, one of the Packers' 7th round success stories, has fallen off in the last year and a half.  Under Favre, Wells was a solid, intelligent center who made good calls and good adjustments as well as fending off the likes of Kevin and Pat Williams, Shaun Rogers, and Tommie Harris.  He was a huge surprise and figured to be a mainstay in the interior for a while.

Unfortunately, Wells' lack of size and durability undermined his effectiveness.  He's listed as 6'2", 303, but he's smaller than that.  And his frame was such that he had maxed out his potential to gain muscle mass; in other words, there's no way Wells would be able to gain any weight and still retain his agility and flexibility.  On top of all that, the concussion, ankle, and shoulder injuries he sustained in 2008 has transformed Wells from dependable to injury-prone.

I honestly wish Wells could keep his starting job, but he's a little like Colin Cole in that he gets overpowered far too easily, even against players of similar size.  Spitz, the main competition for the center job, is much stronger at the point of attack and doesn't allow a defender to split his base as often as Wells does.  Combined with the signing of Duke Preston, look for Wells to hit free agency before his contract expires.

Josh Sitton, the second-year Central Florida product, was the favorite to take the RG spot until a preseason injury sidelined him until Week 3.  The fourth round pick made appearances in 2008, but never made a lasting impact.  In fact, his season was so underwhelming that his Scouts Inc. grade is 20, a level described as such:

A player with very little film to evaluate ... A guy who might show "flashes" in the preseason but does not have any regular-season views ... He has very little experience but he has to be tracked due to his developmental potential.

As vanilla as this description is, it perfectly describes Josh Sitton's career to date: a skilled prospect who could contribute, but we simply have no idea whether he will or not.

In the interest of full disclosure, I love Sitton as a player.  He's a strong, stout blocker who takes effective angles and manages to stay square on his blocks.  He also has a "mean streak", which is something you absolutely need to have playing guard in the NFL.  Additionally, his interviews (the few ones he's had) show a guy who understands his role in the larger scheme.  I predict that Sitton will take the RG spot he could have had last season and, as long as he stays healthy, he should be able to stay there for a long time.

These four players are the ones I fully expect to be competing for the openings at guard and tackle.  Other players like Tony Moll and Duke Preston are backups (at best), and shouldn't start unless in case of emergency.  However, the next two players are guys who shouldn't start this year, but have a shot at starting in the future.

T.J. Lang, the first of Green Bay's two drafted offensive linemen, was widely considered an exceptional pick in the 4th round.  In a draft that was positively loaded at OT (with four elite-level prospects being taken in the top 15), Lang was somewhat overlooked by most draftniks.  He has all of the skills and techniques needed to succeed in the NFL, including good knee bend, pad level, footwork, balance, and work ethic.  What more could you want?

According to most critics, Lang's biggest negative is his overall body strength.  While he put up 30 reps on the bench press before the draft, he needs to coordinate his upper and lower body to achieve maximum results.  That means improving his core strength so that he doesn't break at the waist when engaging stronger defenders.

I truly believe that McCarthy and the coaching staff will have to make a tough decision once  Lang is ready to play for real.  Is he a candidate for tackle?  Or would he be better suited inside?  If so, who do you displace?  Giacomini, Barbre, Sitton, or even Colledge?  This decision won't be made right away, probably not even this year...but it's coming.

Another important decision looming is that of what to do with Jamon Meredith.  A great athlete with a brain to match, Meredith was taken in the 5th round when his talent merits a 2nd round selection.  He's an excellent pass blocker with great fundamentals.  His run blocking is above average, but he projects as a LT in the NFL, where his pass protection will be much appreciated on Aaron Rodgers' blind side.

But, of course, with a prospect who's stock falls in the draft, there's always something.  With Meredith, there were questions about his motivation, work ethic, and competitiveness.  One report that stands out is that his college coaches referred to him as a "locker room lawyer", whatever that means.  I personally believe that Meredith, who actually fulfilled both roles as a student-athlete, didn't blindly submit to his coaches' will because he, get this, is smart.  And smart people in an atmosphere where intellect is virtually irrelevant come across as arrogant and even insubordinate.

If Meredith's problems were substance-related or legal, I'd have a problem.  If people question his competitiveness on the field, I'd have a huge problem.  But if the source of his "character issues" is because he asked "Why?" at some point during a practice, and that's what ended up dropping him into the fifth round, then I just shake my head and say "I'll take him."  The main point is that Meredith can play at a high level, and with a year or two of development, he'll have a great chance to replace Chad Clifton at LT.

As McCarthy said in the post-draft press conference quoted above, the key to fixing the offensive line woes (and by extension, the run game) is continuity.  The best group of linemen in camp needs to stick together for the duration of the season.  Last year, Scott Wells and Josh Sitton's preseason injuries, Daryn Colledge's frightening inconsistency, and Chad Clifton's overall decline scuttled Green Bay's progress up front within the first 6 weeks.  And that can't happen again.

Obviously, there's no elixer to prevent a sprained knee in minicamp, nor is there a crystal ball to see if the starting RT in August will play at the same level in September.  People get relatively better and worse at what they do just like the tide comes in and out.  However, the crux of the issue is consistency.  I'd rather plug in a player who's going to have a 75-80% success rate than one who will fluctuate between 60% and 90%.  Sure, when the guy is dominant, it's great for the team, but how can you schedule when he's on and off?  For the NBA fans out there, I'd rather have David Lee over Lamar Odom.

But this is just one man's opinion.  I favor a conservative approach to the offensive line; I'm fully prepared to sacrifice athleticism and upside for season-long consistency.  Some of you may feel that putting the biggest and baddest men out there will solve the problem.  Others feel that putting the smartest players out there, ones who know the scheme and can rely on craftiness and experience to get the job done.  Which path do you think takes Green Bay to success?