Last week was my first post on TiqIQ, which is a search engine for tickets, and a new partner with SB Nation. They don't actually sell them, but they show what the prices are on the various vendor sites (with a link to go and buy them). Tickets available for the game can be viewed here. It's interesting to scroll around and see what's actually available. 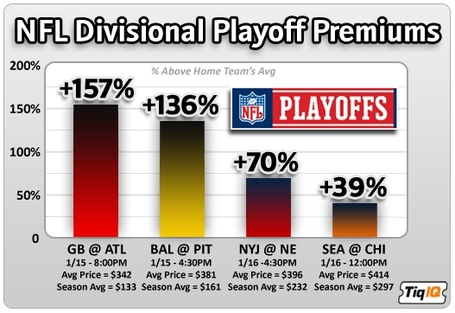 As usual, the end zone tickets are the cheapest for as little as $82 each in the upper deck, but floor seats near the end zones are as little as $134 each. The last time I went to a game at Lambeau, I was in the end zone, and the next time I go to a game, I'd like to be a little bit more centered.

TiqIQ has a neat feature showing a green IQ symbol when it's a good deal, and a red IQ symbol for a bad deal. It looks like a good deal on decent seats are about the cost of an average ticket, which on the above chart is $342 per ticket. Ouch. But I'd pay it for a divisional playoff game, if I actually lived anywhere near Atlanta.

I wonder how much an average ticket would cost per TiqIQ if the game were in Lambeau?