Aaron Rodgers Is FedEx Air Player Of The Year

Share All sharing options for: Aaron Rodgers Is FedEx Air Player Of The Year

I'm not exactly sure how QB Aaron Rodgers became one of the finalists for the FedEx Air Player of the Year award. But the Green Bay Packers quarterback won the award from among the three finalists, along with QB Tom Brady and QB Philip Rivers, based on fan voting. So if you went to the NFL.com website and voted for Rodgers, he won this award with your help.

Since Rodgers is unavailable for any media events like this as he prepares for the Super Bowl, Hall of Fame QB Bart Starr accepted the award in person on his behalf. Chiefs RB Jamaal Charles won for FedEx Ground Player of the Year. Rodgers was available to tape a segment, apparently before he left Green Bay, in which he accepted the award.

Starr answered some questions afterwards, and said he's gotten to know Rodgers. Starr said "I have immense respect for this gentlemen...for how he's handled it." Starr wasn't specific about what "it" was but I'm certain it's everything about how he became, and how he holds his himself, as the Packers starting quarterback.

In the end, it's a meaningless award. Something handed out by an NFL sponsor so they can be associated with the NFL. But they also award $25,000 to the Safe Kids coalition in Green Bay vs. somewhere else. And it's an award that Packer fans helped him obtain.

The picture at the top of the post is done by a professional photographer, and far better than anything I can do. But below is my humble picture taken with my camera. 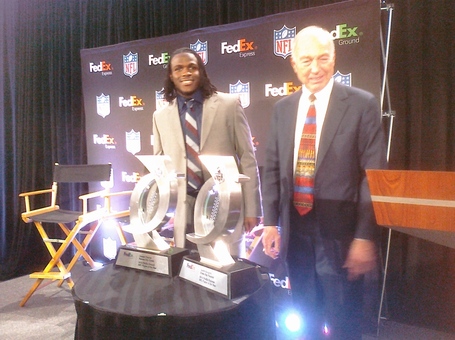