Share All sharing options for: What Is Going On In Dallas Before The Super Bowl - Day 2

Obviously a couple inches of snow is no big deal in Wisconsin, and nothing compared to the major snow storm that's hit most of the country. But it shuts a city like Dallas down. It hasn't prevented me from going anywhere, but it has felt like a Wisconsin winter in North Texas. 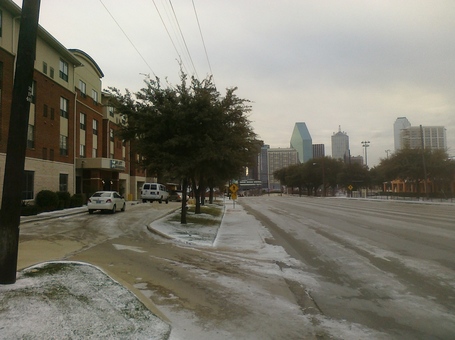 A picture from my hotel, facing towards downtown Dallas.

My first stop today, after I got lost driving around downtown Dallas, is at the media center. It's a three story conference center at a downtown hotel, which is surrounded by police and security. Still nothing like the security at Cowboys Stadium where they had the bomb sniffing dogs out to check my backpack. The first floor is the large NFL Network set, surrounded by dozens of talk radio booths. Everything from local AM radio, to Sirius Satellite, to the Jim Rome show. And a room next door where I battle with my internet connection. 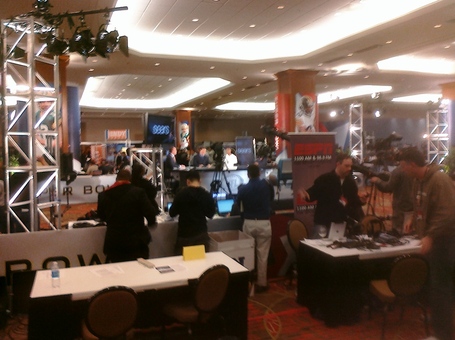 The first press conference I attended was for the NFL Alumni. They're main concern is that former players and spouses are provided with an adequate pension and health benefits. They're making a big push now because the alumni aren't getting any younger. The only current player on stage is Cowboys RB Felix Jones, who was awarded their Spirit award for his work mentoring children and preparing them for college. Jones said "I love to do it and it comes from my heart." 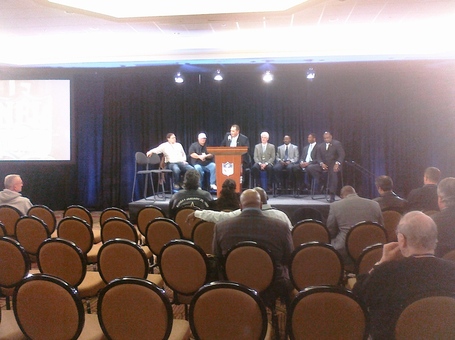 The view from my seat, and Jones is third from the right. Obviously I could have sat closer, but it's all Corey Behnke's fault as he was sitting in the back row. You should follow Corey on Twitter as he too is covering all the media events, and it will push him over 1000 followers.

Next up was the FedEx Air Player of the Year award for QB Aaron Rodgers. As I wrote about earlier, Bart Starr accepted the award for him. This was the most attended conference of the day. Phil Simms presented the awards and Texans RB Arian Foster and Chiefs RB Jamaal Charles attended as nominees. Most of the questions asked were directed towards Starr. Only a few members of the Kansas City media spoke with Charles afterwards. Foster had a good sense of humor, he even interrupted to ask Starr a question during the Q&A session, but I lost track of him after a few minutes. Starr, still acting like the old head coach, did a great job of responding and interacting with the media, and the media doted nearly all of their attention on him. 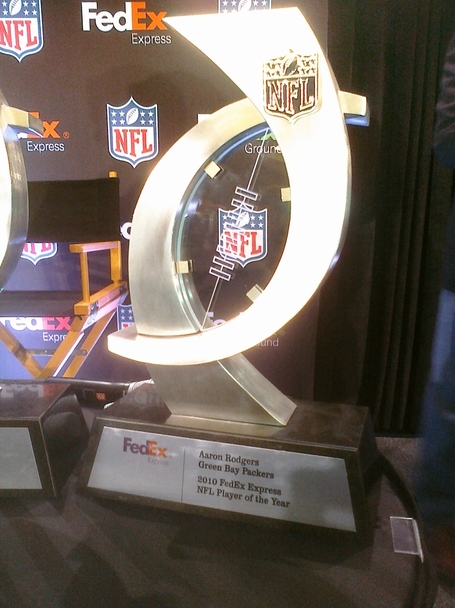 Will FedEx ship it back to Green Bay for Aaron? 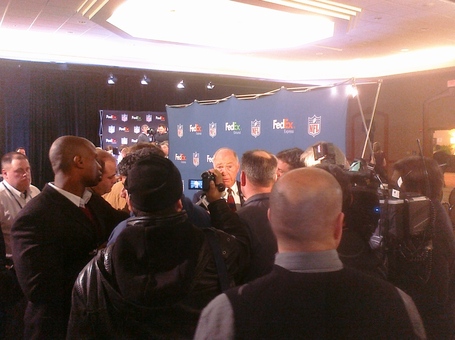 Starr surrounded by the media.

Next up was another made for sponsor awards presentation. Mike Tirico was the emcee, and the event was delayed 15 minutes while he slowly made it through the snow from the ESPN set in Fort Worth. Deion Sanders was in the building since the media center is the exclusive domain of the NFL Network, and obviously DeSean Jackson's flight made it in time for the ceremony. The award was the GMC Never Say Never play of the year, and he won it for this game winning kick return against the Giants. He was asked about the Super Bowl and brought up his alumni connection from Cal-Berkeley with Rodgers. 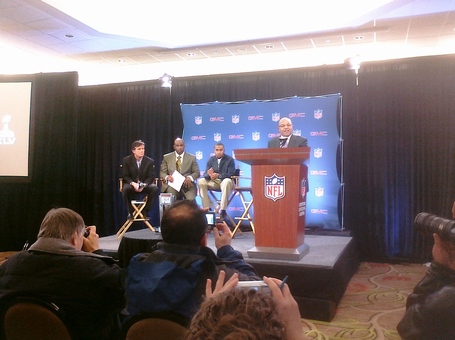 My last stop was the NFL Experience hosted in the massive Dallas Convention Center. It's a combination of interactive skills testing, memorabilia, place for autographs, and a huge gift shop. You could make an all-day event out of it. This is a feature at every Super Bowl now, but this one will have the largest attendance because it's being held for the longest number of days. 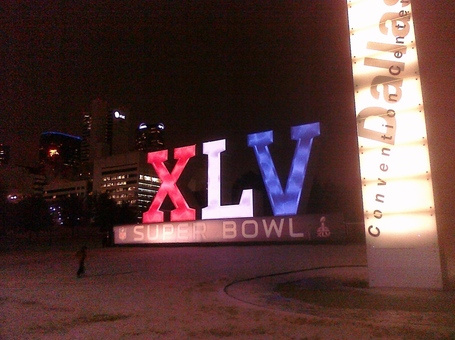 A huge interactive light and sound show at the front of the building, downtown Dallas in the back. 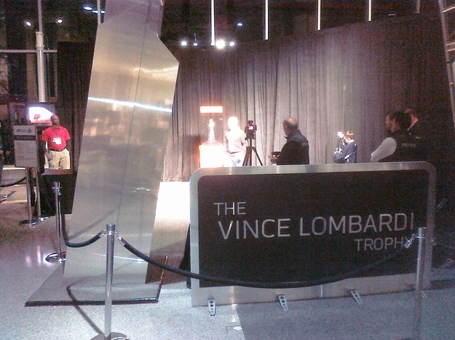 People lined up to have their photo taken with the Lombardi Trophy. 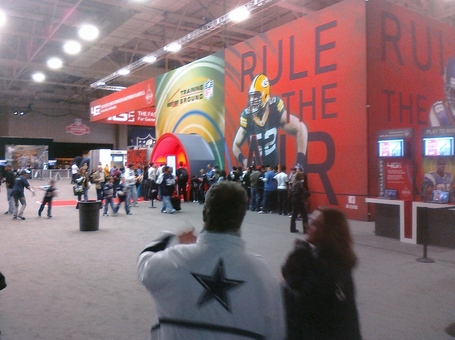 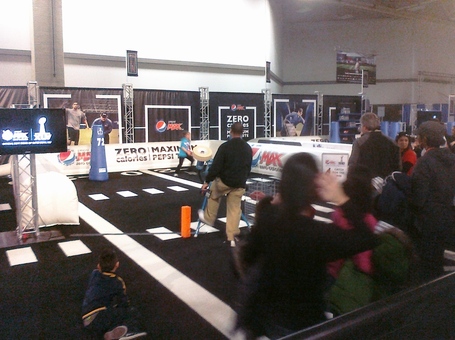 One of the skill testing areas that had people lined up. 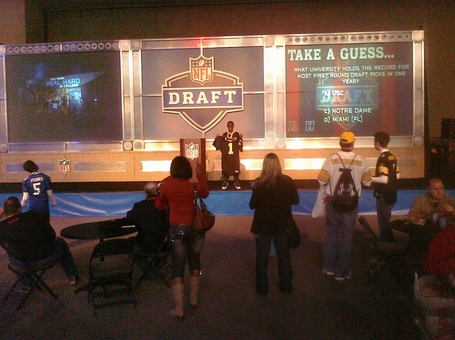 The place where you can imagine what it's like to be drafted No. 1 overall. As you stand next to the food court. 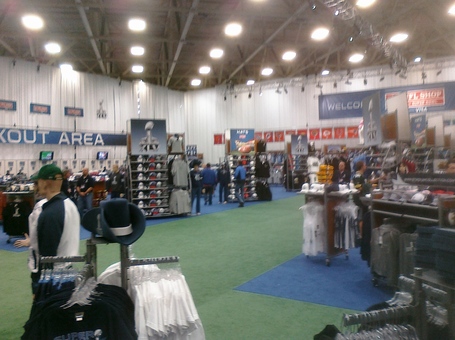 The massive NFL shop store. They did a good job getting Packers/Steelers Super Bowl merchandise available, but a lot of it is the ordinary jerseys and such you'd see in many stores. Lots of Cowboys stuff too, as they rightly assuming that there will be plenty of resident fans attending the NFL Experience. 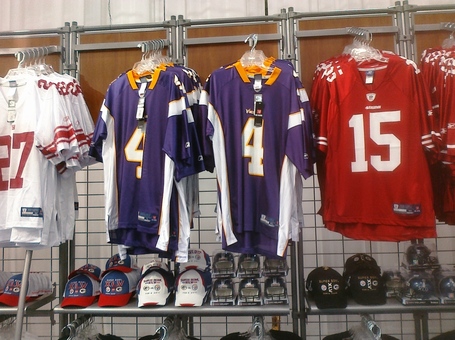 They seriously had that for jersey for sale. Do you know who's fans are traveling down to the game? 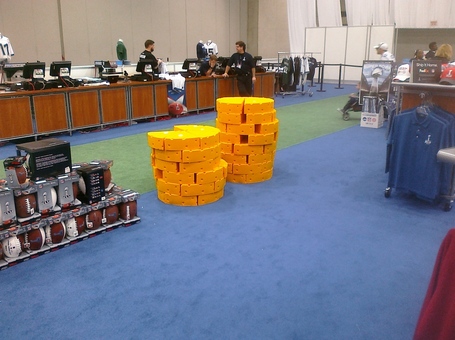 Ah, that's more like it. Lots of Terrible Towels for sale too. 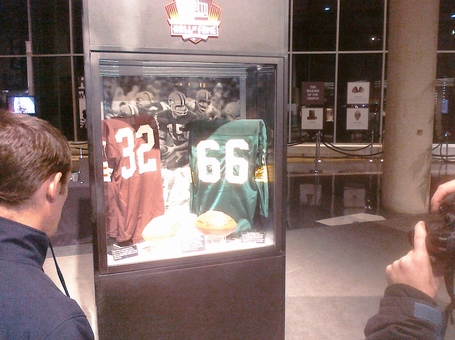 And finally, a Ray Nitschke jersey. Nothing like seeing that as I was walking out the door.