Share All sharing options for: What Is Going On In Dallas Before The Super Bowl - Day 3

Another early morning for me as I made it to the Green Bay Packers press availability at their hotel in Fort Worth, about a half hour away from my hotel. It's still cold, and there's still a lot of ice on the roads. Also, the traffic is picking up as more people are starting to go back to work. The hotel was small for a media event of this size, but it was decked out for the NFC Champs. 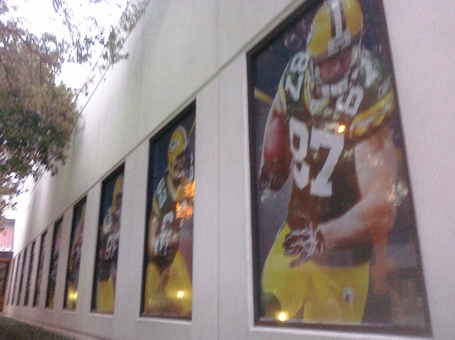 The small conference room for Mike McCarthy's presser was packed tight with media. 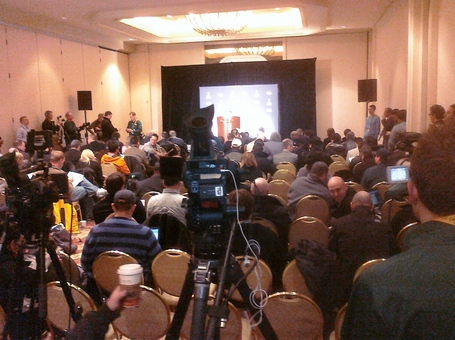 Then we went just off the main lobby where two restaurants were opened up for all the Packers coaches and players to sit around for media interviews. It was really cramped, and I mostly stayed out of the way. 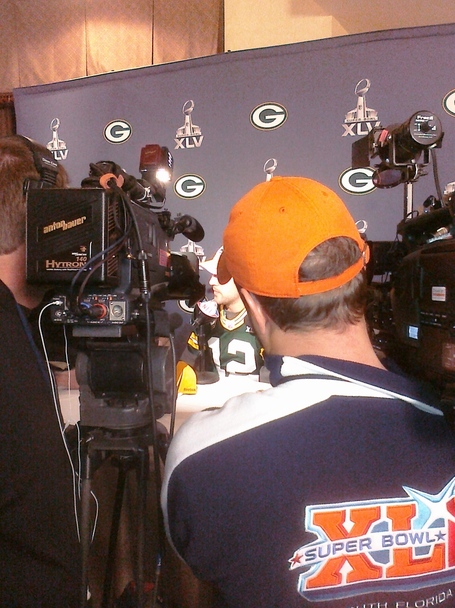 The media crowds around QB Aaron Rodgers to no one's surprise. 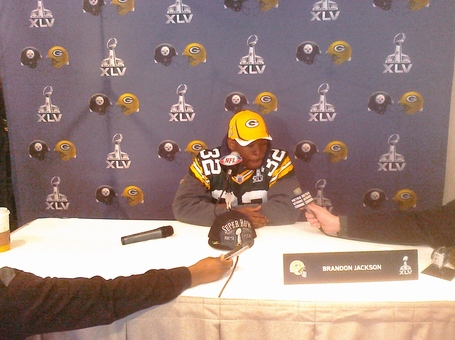 While most of the national media asks: Brandon who? 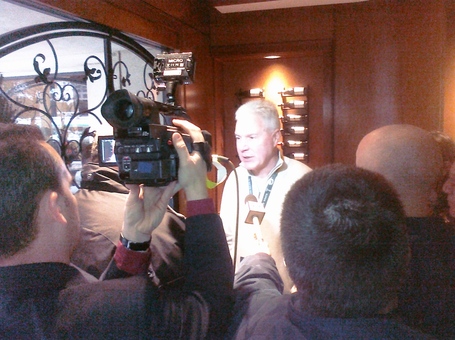 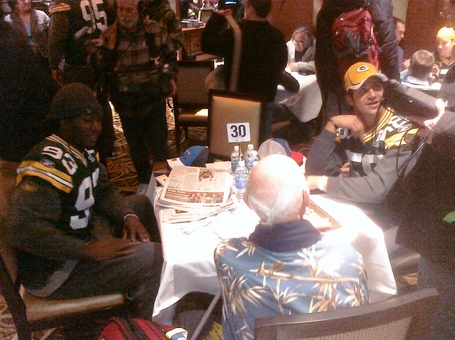 LB Erik Walden and LB Frank Zombo are just hanging out, and unfortunately talking to this guy who's just handing out candy. It's surprising that the NFL would give credentials to so many organizations who are looking for attention for themselves instead of drawing attention to the Super Bowl.

Afterwards, I drive back to the media center in downtown Dallas, but end up on a different shuttle bus back to Fort Worth as I go to the TCU (BOO!) campus for Steelers (BOO!) practice. 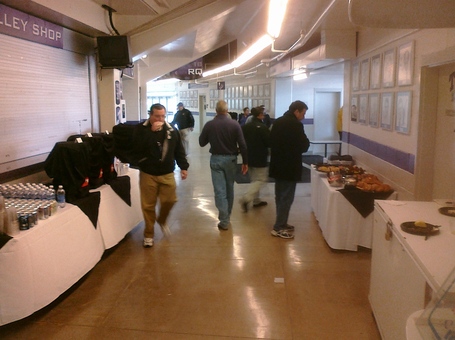 I have to admit I'm just here for the food. 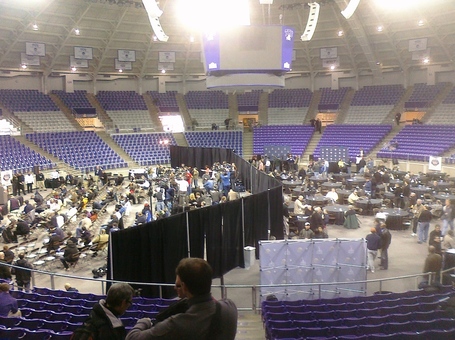 While the Packers were crammed into their hotel, the Steelers have the entire basketball court at TCU. Is that fair? Or do the questions come easier when Ted Thompson is hosting in his wine cellar? 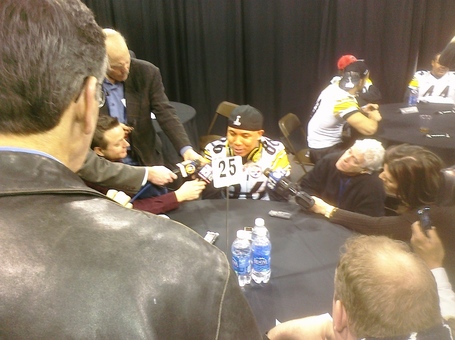 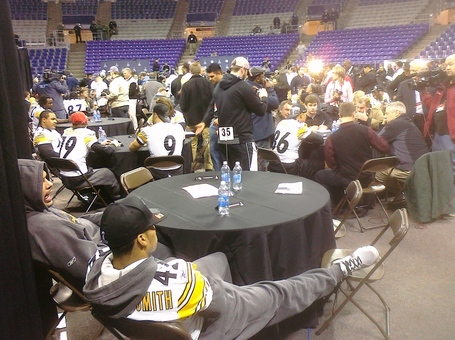 And ignores the practice squad. Some of them just grabbed their name cards and switched tables. Others never looked up from their smart phones. It was the same thing that happened at the Packers event. Even I struggled to think of questions to ask players on the practice squad that I've never seen on the field. 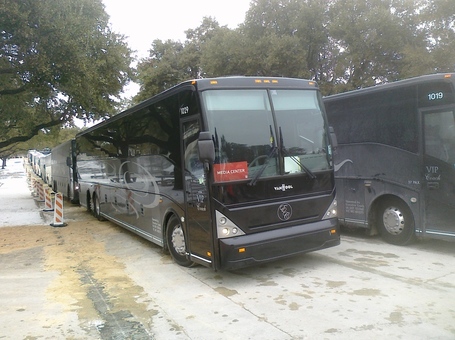 Back on the shuttle bus. With Matlock re-runs on the TV inside the tour bus as I go back to the media center. 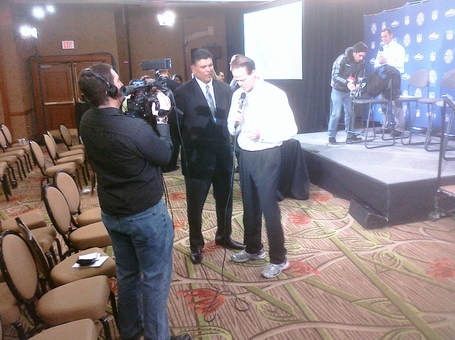 I miss the press conference for the Madden protectors of the year, so I miss my chance to see John Madden himself, but Hall of Fame tackle Anthony Munoz is hanging around for an interview. 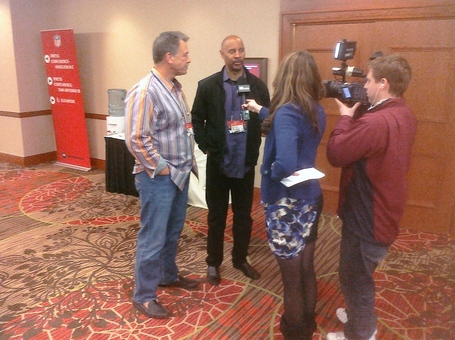 And Packer great WR James Lofton is out in the hallway doing an interview for CNN.

Next up is the Pepsi Rookie of the Year award which is well attended by the media. 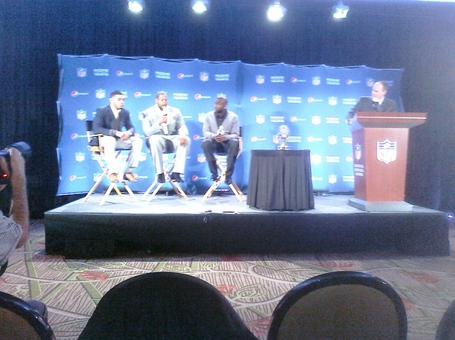 Here's the view from my seat with Rich Eisen at the podium.

But that's nothing compared to the huge ballroom, and massive media coverage for the Black Eyed Peas press conference. There were some actual questions about the Halftime show set-up and play list, but most of the questions were asked to Fergie. 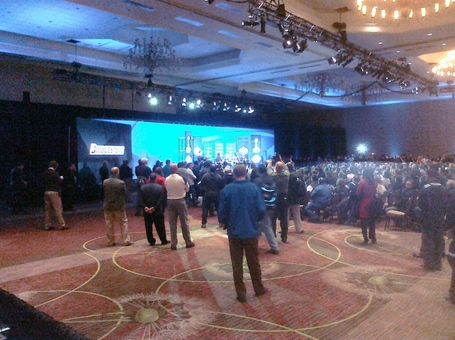 Here's my seat at the way back of the room. There was no way to get within 50 feet of the stage (reserved seating), so I just hung back. 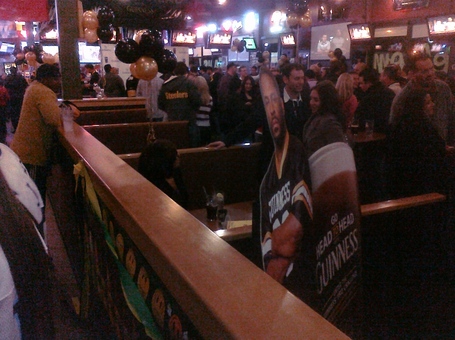 My last trip of the day was out near Cowboys Stadium in Arlington, an inconvenient hour drive away. But free food and drink, and I got to meet Jerome Bettis. Apparently there was a drinking contest, but I arrived after it was over.

Finally back to the hotel for a quick chat with Michael Bean of Behind The Steel Curtain while he conducts an interview with Cheesehead Radio. Back at it tomorrow morning.