Share All sharing options for: What Is Going On In Dallas Before The Super Bowl - Day 4

These daily posts are like my running photo album from Dallas. I've got a press pass, and every member of the media I've met has been friendly to me. It's been very nice considering they are all working in common quarters, fighting for access, and exhausted from running around. The media keeps themselves busy.

I'm never going to beat ESPN to the latest scoop, so I'm just posting my lousy cell phone pictures, and acting like a fan with a back stage pass. With a running commentary. Onward!

Another day in paradise. Frigid temperature and fresh snow. It's just like a Midwest winter, and I'd never believe I was in Texas. 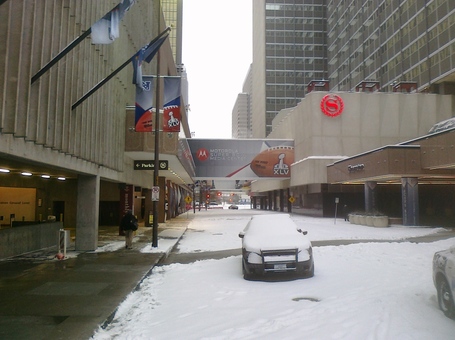 The fresh snow outside the media center and hotel.

The NFL threw us a curve ball and moved Mike Tomlin's press conference up by two hours. Most of the media didn't show up, and he only answered questions for a few minutes before he took off. 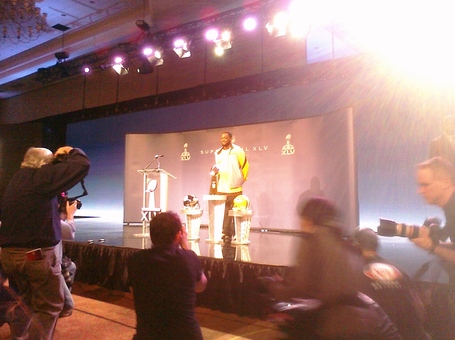 Photo taken from my seat during Tomlin's brief visit.

On the other hand, Mike McCarthy's 8:30 am press conference didn't start until 9 am. The roads are that bad, and he said he was driven to the conference in a squad car. More reporters were on hand this time, and he spoke for a good 15 minutes. 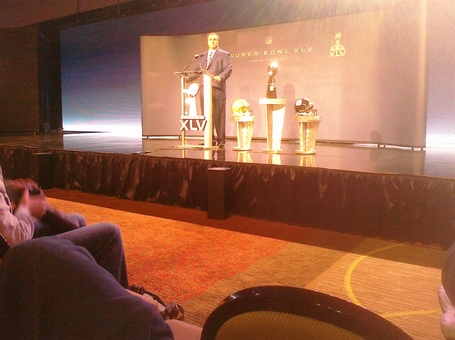 Photo taken from my seat during McCarthy's delayed press conference.

But with all that extra time, I had a chance to go up and take a photo of the Vince Lombardi Trophy. Dozens of media members had their pictures taken in front of it. 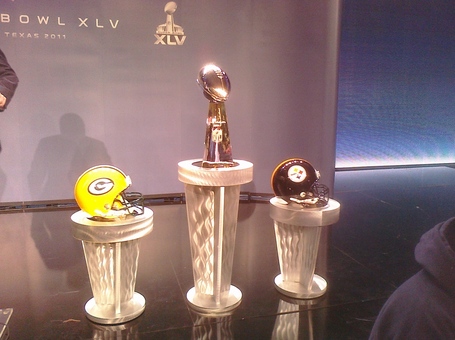 Team helmets and the Lombardi Trophy.

Due to the delay, a couple award ceremonies had to get done quickly. First was the announcement for the Walter Payton Man of the Year nominees. Not the winner, just the nominees. I was surprised at how slight Asomugha was. And Idonije drew a decent sized press crowd after the ceremony was over. 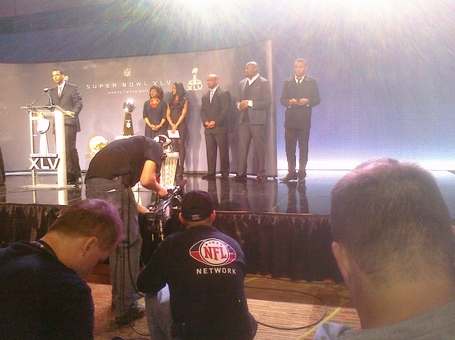 Of the five people standing at the back, from left to right is Walter Payton's family, Israel Idonije, and Nnamdi Asomugha.

After they were rushed through, it's time for the inaugural Don Shula Coach of the Year award. It went to high school coach Ray Seals of Houston, TX. 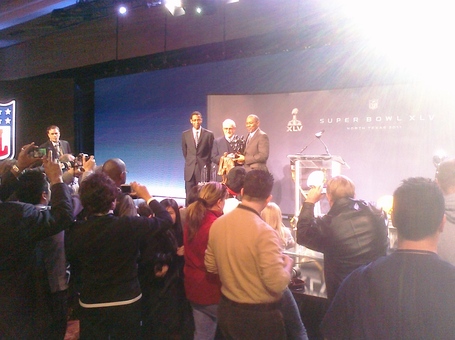 I got up from my seat for this one. I'm standing close to the middle aisle. Don Shula, obviously, standing in the middle. He was walking with assistance, so it was nice of him to do this.

Most of my day was derailed by the snow. It takes a couple hours to get to Fort Worth in this weather, and I didn't want to spend half my day in a car. Driving (slowly and carefully) past the Dallas urban sprawl isn't that interesting. I wandered around Radio Row, but I didn't take a lot of photos today. It seemed a lot busier with a lot of big names in town promoting something or another. 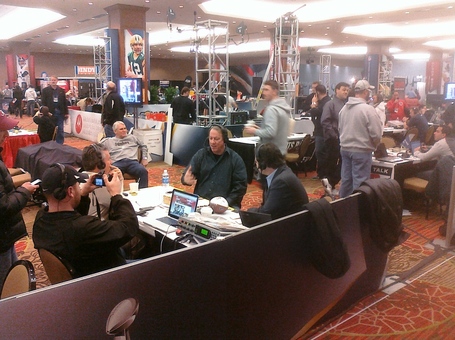 I also rode up the elevator with Eli Manning, saw Roger Goodell (again), saw Mark Sanchez before his minor problem hit the web, and probably a ton of other notable players that I just didn't recognize. Hollywood and celebrities also descended on the media. Adam Sandler was there to promote a new movie. Miss America was kind enough to have her picture taken with anyone who walked by. 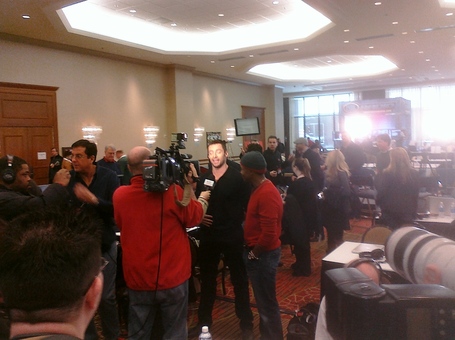 Not only was Hugh Jackman in the building, but he predicts a Packers win.

The afternoon went by in a flurry of posts about injuries, snow falling from Cowboys Stadium, and the end to the team photo drama (until ESPN drags it out again). Then out to dinner, and out for a couple drinks, before calling it a day. Another early morning for me tomorrow.