Share All sharing options for: What Is Going On In Dallas Before The Super Bowl - Super Bowl Eve

My day started off very early as I drove an hour away to Grapevine, Texas, for the 2011 Super Bowl Breakfast. They were presenting the Bart Starr Award, presented to this year's winner, Drew Brees, by Packers legend Bart Starr. Nothing against Brees, but it's too bad it couldn't have been Donald Driver, who was one of the nominees for the award. The event was billed as a re-enactment of the 1967 Ice Bowl with former Packers and Cowboys who played in that game in attendance. Along with Starr were former Packers Jerry Kramer and Donny Anderson. 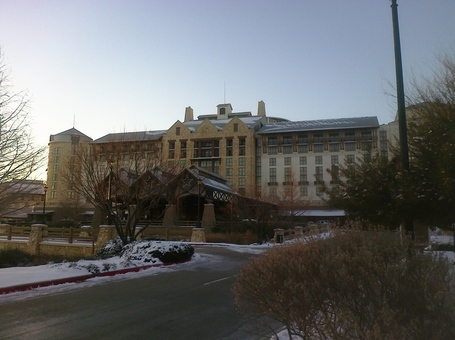 It was at the Gaylord Texan Resort. You can see the snow on the ground at 7:30 a.m. By the time I left around noon, the sun had melted almost all of it. 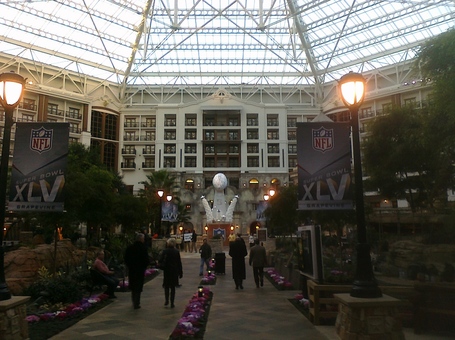 The place was enormous. I walked just under a half-mile from the front entrance to the ballroom at the other side of the facility. It's designed to give you no reason to leave, and it's somewhat remote situated near Lake Grapevine. 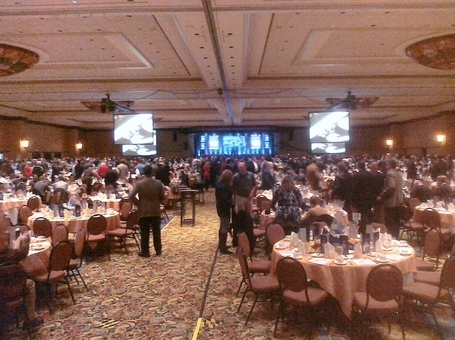 It was an intimate gathering with a couple dozen former players and approximately 2,400 paid guests. I sat in the back near a table of Packer fans who couldn't have been too happy. We could barely see the players on the stage, and those four big screens were necessary.

One speaker was former safety John Lynch. They showed some highlights of his vicious hits, one even drew some oooohs as he spoke, which made him stop and turn around and say something to the effect of "I hope the commissioner doesn't fine me for that hit." Some of them were of Lynch hitting Brees, who jokingly looked over his shoulder when it was his turn to speak.

On the Ice Bowl, Starr explained the game-winning touchdown dive. The Packers were trying to punch it in running the wedge play, but the backs couldn't get any footing on the rock solid turf. After two failed attempts, the Packers called a time out, and Starr went to talk to Lombardi. Starr told Lombardi "I can shuffle my feet and run it." Lombardi's response was "then run it and let's get the hell out of here." 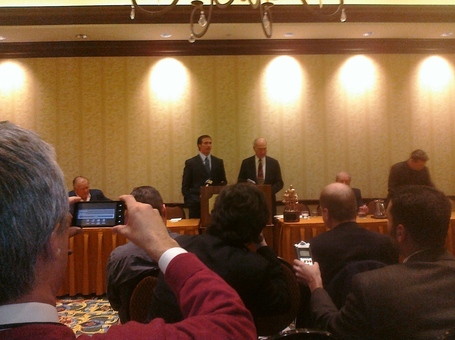 Drew Brees and Bart Starr at the podium from my seat. At the press Q&A afterwards, Brees was asked who will win the Super Bowl. He said "if it's a clean game, I mean with not a lot of turnovers, then I expect the Packers will win." 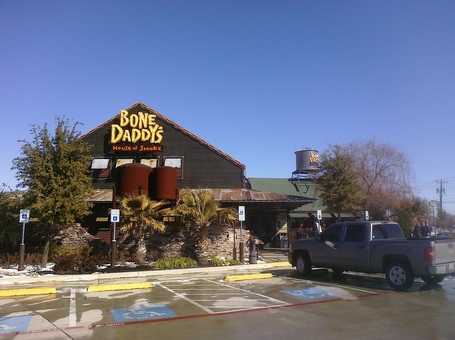 Since I did not have any breakfast at the Super Bowl breakfast, I drove to a local chain restaurant that served ribs. Probably not a classic Texas BBQ joint, but it was good. At least I had ribs once while in Texas. And since I got to have Tex-Mex on Friday night, I made an attempt at eating the local cuisines. The chain is trying to be like Hooters, so there's not much left to the imagine with their attractive female wait staff. Reporting is difficult work. 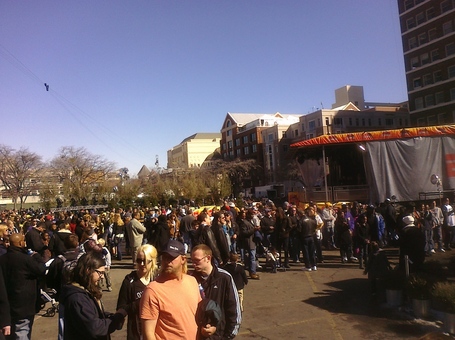 Then I drove to Fort Worth for the ESPN set at Sundance Square. I spent more time trying to get on and off the interstate, and into Starbucks, then I did looking around. The set is on a surface parking lot, and not very exciting when the cameras are off. It's a nice area with some shops and restaurants, but there wasn't a lot of special events going on. While I did see some Packer fans, it was mostly Steeler fans while I was there. 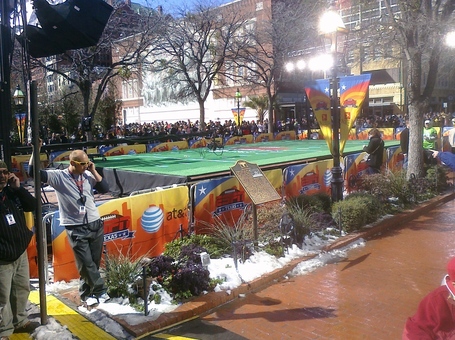 They also took over a street for their fake football field set. 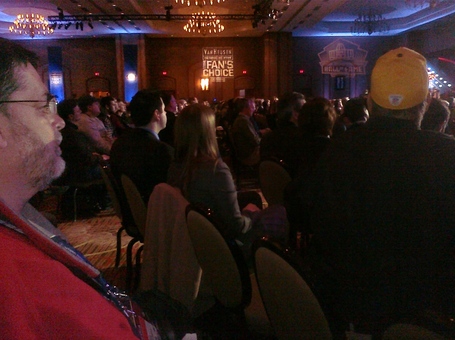 Picture of the crowd at the live announcement on NFL Network. After leaving Fort Worth, I went back to the media center in Dallas for the announcement of 2011 inductees for the Pro Football Hall of Fame. Feel free to discuss, but it's not a subject I really get into. Obviously, based on the packed house above, it's a topic that NFL writers love to write about. 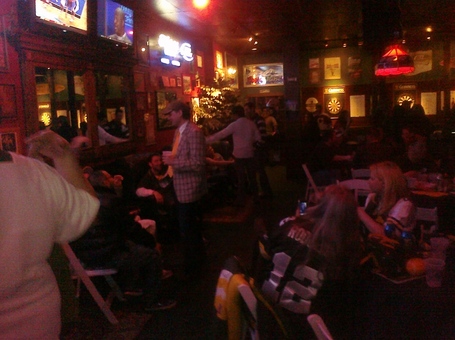 It took me a while, but finally I made it back out to Arlington for the Cheesehead TV Tweetup. Corey and Brian from Cheesehead TV were there, along with Alex and Jayme from Packers Lounge, and Jersey Al from the blog of his own namesake. Kyle Cousineau was there and he's got an amazing Super Bowl story. And my apologies to anyone I did not name. I got to talk Packers football with a bunch of very knowledgeable Packer fans. It was a great time, and my thanks to Cheesehead TV for organizing it. 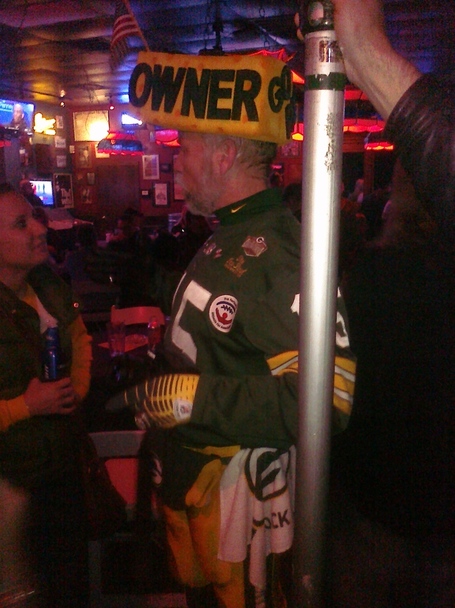 And I got to meet Steve.