At the bottom of this post is one of the pictures I took as the Green Bay Packers celebrated on the field immediately after their Super Bowl win. LB Clay Matthews was surrounded by cameras, and while I wasn't able to get a clear picture of him, I did get a clear picture of his hair and his father. The photo to the side is a much better one taken by a professional.

In the Super Bowl, he had an ordinary stat line: 3 tackles, 1 pass defense, no quarterback sacks or pressures. But he was also credited with a forced fumble, although it might have hit off DE Ryan Pickett's helmet. Either way his play to stand up RB Rashard Mendenhall was a major factor in causing the turnover. Until he came off the edge and forced that fumble, it looked like the Steelers were having some success running to his side. While he might have allowed a couple 10+ yard carries, when he guessed right on that forced fumble, it more than made up for it.

He also had that amazing jump ball when he came in on QB Ben Roethlisberger unblocked, batted the pass straight up in the air, and he almost intercepted it. It obviously didn't force a turnover, but it was a great attempt. I expected more from their best defensive player in their biggest game, but part of the reason why he had a quiet night was by design.

In the first half, Roethlisberger had some success when he ran for a first down. While he had 31 yards rushing overall, he only had 6 in the second half. That was in part because Matthews began to spy on him. He would run a stunt in the middle, and pause before taking on the center. It gave him the option to rush the quarterback, chase him down, or drop into coverage if a tight end or running back came off a block. It's wasn't a glamorous role, but he played his part in slowing down an offense that seemed to have all the momentum after they scored a touchdown to start the third quarter. 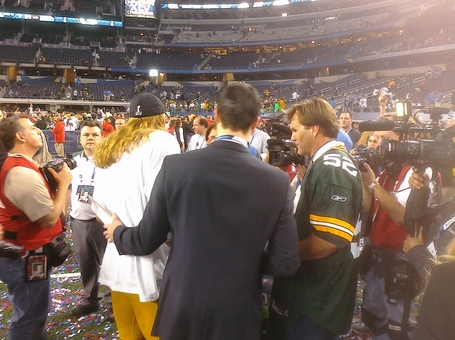