Throughout the season we can point back to any number of plays that altered the course of the season. Some get more recognition than others. It’s easy to remember Bishop’s pick 6 against Favre or Aaron's clutch 4th down TD against Atlanta. But I also think there are several other plays that deserve some recognition. In the end you can say that EVERY play, had it gone any differently, could have meant the difference between a title and going home a loser. But still, I think this is a fun way to remember the great moments of the season while the lockout draws on. I’m not sure how many I’ll do, but most games have a moment like that (no more than one play per game).

So here it goes. Unsung play of the season number one: Clay Matthews sacks Michael Vick on 2nd and 10 late in the 4th quarter to force 3 and 13. 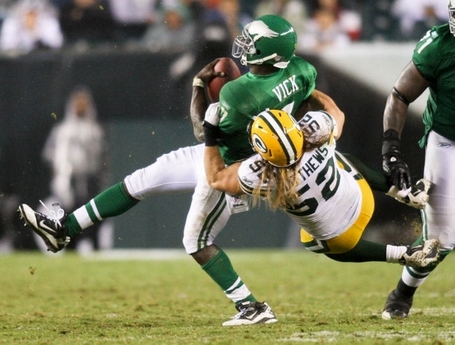 Clay had a monster game. He had 3 sacks, including a KO of Kevin Kolb in the first half. That one gets all the press since it allowed Vick to to come in and show that he’s still got it. However, Clay’s sack of Vick here forced a 3rd and 13 with subsequently turned into 4th and short (we all know how that turned out). The Eagles were driving with under three minutes to go. Green Bay had dominated the first half but had been unable to solve Michael Vick. It was Clay’s sack that set up the game ending 4th down stop, giving the Pack it’s first victory in Philadelphia in a very long time.

What they said after the game (courtesy of the Sentinel):

I think he is a beast out there and he is a guy that is never going to give up on a play. He is the kind of guy that you cannot block with just one guy. He is a guy that shows good speed and he is going to hunt you down.

Physically, I think I have to get my wind back a little better out there but mentally I was definitely ready to go. Fortunately for me I was able to make some plays that helped us to win the game. I think I did not play my best ball out but for being off for four weeks, I think I did a pretty good job.

Runner up: Michael Vick decides to not run it in on 3rd and goal with 6 minutes left in the 4th forcing the eagles to settle for a field goal to make it a 7 point game.