The SB Nation sites have been partnering with TiqIQ for many months now, and I find myself surfing through their ticket deals for the Green Bay Packers and a variety of other teams. It's interesting to see which games are the most in demand.

There's no surprise that the early season games are the ones people want. The Saints game is obvious. But that tickets are more expensive for the Broncos and Rams than any other non-Bears/Vikings rivalry game is more an indication that it's a lot nicer to sit in Lambeau Field for an October game than to watch the Raiders in the middle of December. They had better win those two cold weather games against the Buccaneers and Raiders. 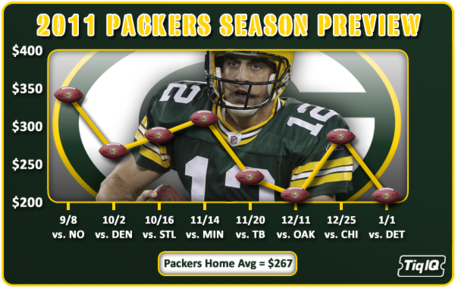