The Green Bay Packers only had to defend the read option last week a few times, but that's mostly because Joe Webb wasn't a passing threat. Colin Kaepernick has a cannon. The Pack will have to be on their game on Saturday.

Share All sharing options for: Packers vs. 49ers: Defending the read option

The read option is a play that has been around for years, but until this year, had only been used sparingly in the NFL. It was designed to add an element of deceptiveness to the offense by setting up either a handoff, quarterback run, or a play-action pass. The read option had been previously used for quarterbacks like Michael Vick, Vince Young, and Tim Tebow who were extremely athletic but struggled to read defenses at the NFL level.

While that is still the case, many teams -- the San Francisco 49ers included -- use the read-option now as a weapon in addition to the rest of their offense, not just a crutch for quarterbacks that struggle to read the defense. The nature of the play not only allows for consistent runs, but forces defenses to play up and by doing so, opens up the passing game.

When running the ball in the read option, the key to the play is the quarterback properly reading what the edge rusher on the side of the line that he's running to is going to do. In the Packers' 3-4 defense, this will be their outside linebackers. 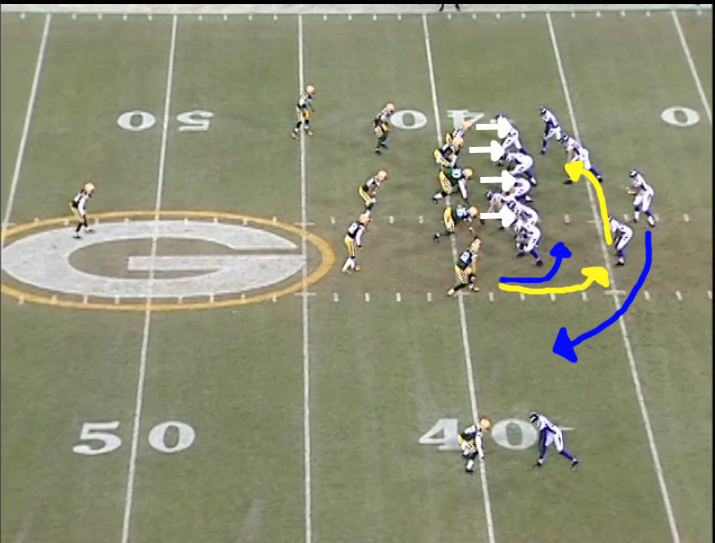 The picture above from the Wild Card game between the Packers and Vikings shows how the Packers lined up on the first read option the Vikings ran on the night. The Vikings' quarterback, Joe Webb, has Adrian Peterson lined up to his left, meaning that if he handed it off, it would have been a sweep to the right with Peterson moving from the left to right at the snap of the ball. If Webb decides to keep the ball and run with it, he will be running around the left end. The key to this play is what the right outside linebacker, Clay Matthews, will do.

Even with Matthews as the focal point of the play, it is still important for the rest of the defensive line to maintain their gaps and try to get through the offensive line. If Matthews rushes inside, like the blue arrow illustrates, Webb will keep the ball for himself and run around the left end. If Matthews rushes straight ahead and sets the edge, Webb will hand the ball off to Peterson for a sweep to the right, which is why it is so important for the rest of the line to get penetration and maintain their gaps.

Matthews' job on the play is to shuffle read step and keep his pads square to the play. By doing this, he is not committed to defending the running back or quarterback, but able to quickly move to either. Properly executing the shuffle read forces Webb to make the tough split-second choice regarding what Matthews will do. By holding his position correctly, Matthews not only forced Webb to make a tough read, but allowed the inside linebackers and secondary to flow to where the ball is once the quarterback has committed and not worry about getting burned. You can see the play unfold, below.

In that play Matthews does a great job of starting inside but not committing to it, which forces Webb to keep the ball. Matthews keeps his pads squared to the play and uses his athleticism to easily shuffle back outside and completely shut down the play, forcing Webb back inside.

Now for an example from another game of a 3-4 outside linebacker playing the read option poorly. The gif below shows DeMarcus Ware playing the read-option improperly, as he did numerous times that night, and biting inside to stop Alfred Morris in a game between the Cowboys and Redskins. Ware does not keep his pads squared to the play and completely commits to the handoff. When Robert Griffin pulls the ball back and runs around the left end, Ware is unable to adjust and gets burned for a first down. If he keeps his pads squared like Matthews did in the above gif, he would be able to set the edge and either force RGIII back inside as Matthews did to Webb or force RGIII all the way outside, where he can get help from the secondary to tackle him or force him out of bounds.

Defending the 49ers is going to be a handful for the Packers this Saturday. Colin Kaepernick and the read option will present a challenge they have not seen yet this year, outside of a couple of effective plays from the Vikings last week, and require the kind of discipline they showed when containing Adrian Peterson last Saturday. The entire gameplan for the Packers should start and stop with defending the run. If they are unable to stop the run and give up long, sustained, drives, it not only takes a toll on the defense, but puts a lot of pressure and limits the offense.

Now that Kaepernick is at quarterback, the read option is a massive part of the 49ers' offense. With Matthews consistently needing to set the edge and shuffle read step to contain the read option, it limits him a little bit in the pass rush because he needs to make sure he stays in position to stop the run. Matthews traditionally will line up over the guards for a few snaps each game and rush up the middle, if the pass rush struggles early on, I would expect to see him lining up over the guards more often to allow him to worry more about getting to the quarterback than setting the edge.

Given Kaepernick's athleticism and how thoroughly Frank Gore gashed the Packers in Week 1, stopping the read option will be tough for Green Bay. It will also put a lot of pressure on the secondary to cover man-to-man without much help. The Packers have done a good job of not giving up the big pass play this year, but that will be tested Saturday. The read option will open up the play action pass, and the Packers' defense has a tough task ahead of them in trying to stop that element of the 49ers' attack as well.

Keeping San Francisco's offense contained will be a tough task for the Packers, but they have the talent to make it happen.

Thanks to CaptainConway99 for helping on this article.