Packers vs. 49ers Film Study: How Not to Defend the Zone Read

Wherein we try to examine what went so horribly wrong on the 49ers' long touchdown that broke open Saturday's game.

Share All sharing options for: Packers vs. 49ers Film Study: How Not to Defend the Zone Read

There is no question that Colin Kaepernick is a great athlete; watching him run around on the football field in Saturday's game makes that clear. What should also be clear from watching other NFL games this season is that the zone-read play, which the 49ers ran to perfection last night, can be defended successfully. In fact, we saw a great example of the biggest key to stopping that play last week against the Vikings, when Clay Matthews set a perfect edge on a Joe Webb run to force him back to the inside. Sadly, this film study will show exactly how to fail at defending against this play.

Without rehashing the details too much, the zone read's keys are the quarterback and the outside edge defender - the outside linebacker in the case of the Packers' 3-4 defense. The 49ers clearly had watched the tape of the Vikings' attempts at the zone read in Green Bay last week and noted that Matthews did a great job of not over-committing to the quarterback or to the running back; therefore, they ran the play to key on Erik Walden on the other side.

The Packers line up in their base 3-4 defense, while the 49ers have two receivers to the right side. Charles Woodson comes down from the safety position to show coverage on Michael Crabtree in the slot, while Sam Shields appears to be locked up in man coverage on Vernon Davis, playing on the line. Before the snap, Bruce Miller motions from a wing position on the left into the backfield. Here's the play just after the snap, and just before Kaepernick commits to the handoff or the keeper: 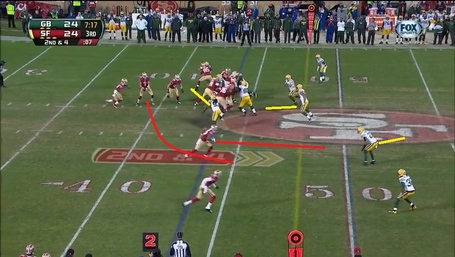 At this point, Erik Walden is committing to the inside to defend the handoff. Brad Jones is stepping up towards the line of scrimmage, but with Walden overcommitted inside Jones fails to recognize the possibility of the zone read. Instead of bouncing to the outside lane, Jones stays in the middle of the defense. Meanwhile, Michael Crabtree runs a downfield route, forcing Woodson to drop back and leave no defenders outside of Walden. Kaepernick makes the correct read here, keeping the ball and running to the outside. 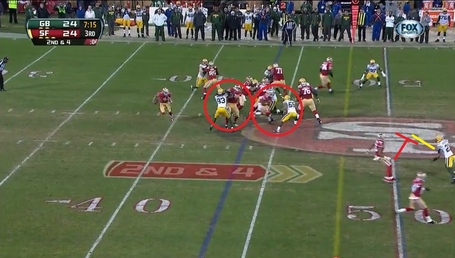 Now that we see Kaepernick running with the ball, you see how badly Walden and Jones have overcommitted to the running back. Walden literally has his back turned to Kaepernick, while Jones is in the middle of the field ready to make a tackle. At this point, it's nearly impossible for Walden to disengage from his blocker, turn 180 degrees, and chase down Kaepernick, especially considering the quarterback's speed. The defender with the best angle on Kaepernick now is probably Woodson, but he doesn't recognize yet that Kaepernick has kept the ball. He'll overcommit to the inside as well. To make matters worse, Crabtree is getting in position to try to block Woodson. Also, Tramon Williams has dropped so far back in coverage that he's not even in the frame any more. 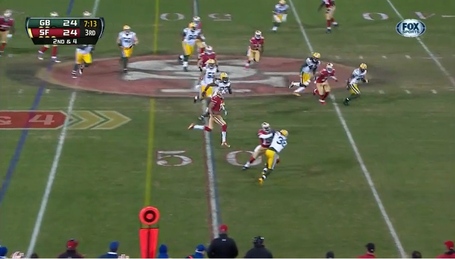 Somehow, Walden is the closest player to Kaepernick ten yards downfield, but without a good angle of attack, he has no chance to bring him down. Woodson might have been in position to make a play here, but his step to the inside is all that Kaepernick needs to get the angle to the sideline and out of Woodson's range. Finally, Ted Ginn of all people makes a nice block on Williams, removing any possibility of Tramon making a play. This shot is ten yards downfield from where Kaepernick started running and there are five Packers within five yards of the quarterback, but none of them have any chance of reaching him.

This play was set up by the 49ers running a spread formation to the run side, forcing Woodson and Williams into single-coverage. Without any help to the outside, Walden must recognize the possibility of the read option play and set an outside edge. Furthermore, the linebackers and safeties did not shift over to the right side, leaving no help for Walden when he did fail to keep contain. This appears to be an error in both scheme and execution, leading to the turning point in the game.

While the 49ers' formation put the Packers' defense in a less-than-ideal setup, it was still up to the players on the field to execute their responsibilities, and virtually none of the Packers who played critical roles in this play did so. Whether this is a failure by Dom Capers and the rest of the coaching staff to properly communicate those responsibilities or simply a failure by the players to execute them, we may never know.