Packers vs. Ravens: Final score 19-17 in an ugly, but important road win for Green Bay

The Green Bay Packers kept pace with their NFC North rivals on Sunday, picking up their third victory of the season.

Share All sharing options for: Packers vs. Ravens: Final score 19-17 in an ugly, but important road win for Green Bay

In an ugly and rainy contest, the Green Bay Packers squeaked out their third win of the season, downing the Baltimore Ravens, 19-17, at M&T Bank Stadium. It was hardly a glamorous performance from Green Bay, but given the banged-up nature of their roster, they're unlikely to complain about the means by which they pulled off a road win against a good opponent.

The tone for the day was set on the first drive, when the Packers rolled into Ravens territory quickly, but saw their drive stall when Jordy Nelson dropped what should have been an easy catch for a first down. Green Bay had to settle for a field goal, one of four on the night.

John Kuhn was responsible for the biggest mistake of the first half, inexplicably touching the ball and failing to pick it up after a blocked punt, gifting possession back to the Ravens. Thankfully for Green Bay, Baltimore didn't capitalize on that error. While the Ravens got into Packers territory on a couple of occasions, they didn't get on the scoreboard in the first half. The Packers had a massive goal line stand in the second quarter, denying the Ravens on fourth and goal from the 1-yard line following Kuhn's gift.

Other than their failure to turn scoring opportunities into touchdowns, the story of the first half for the Packers was injuries. James Jones picked up a left knee injury that took him out of the game, though he could walk with a limp under his own power. Randall Cobb wasn't as fortunate. He took a lick just before the end of the first half that caused him to exit the game with help from the training staff, then go back to the locker room on a cart. 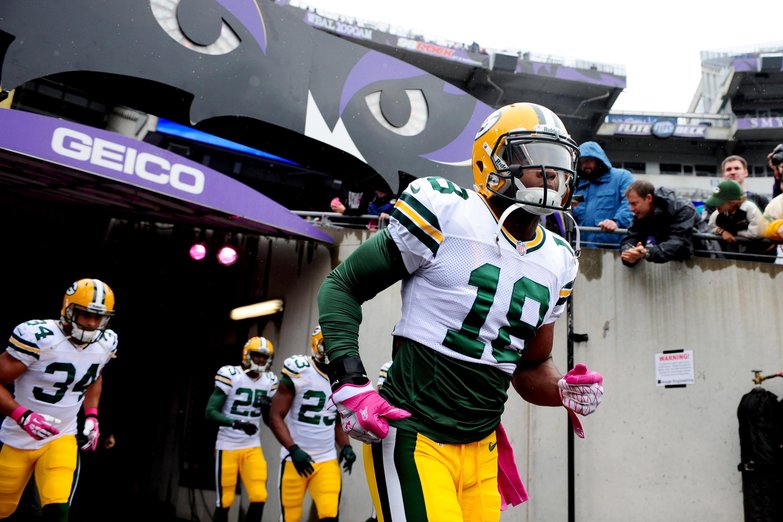 The Packers might have lost one of their biggest playmakers for a while on Sunday.

Mason Crosby missed a field goal at the end of the second half, but Joe Flacco and the Ravens opted to go for a score of their own with less than 30 seconds on the clock instead of taking a knee. Flacco was stripped on the Ravens' first play, with Datone Jones picking up the ball and running into field goal range. Crosby redeemed himself, converting the kick to end the half and send the Packers into the locker room up 6-0.

Green Bay didn't get off to a good start in the third quarter, though it took a while for the Ravens to get back into the game. A pass intended for Jordy Nelson in the end zone was picked off early in the third quarter, but the Packers added another field goal before the Ravens scored for the first time, getting into scoring range off a big play by Jarrett Boykin on a screen. The Ravens answered with a 60-yard pass to Marlon Brown on their next drive, but they had to settle for a field goal.

Late in the third quarter, the Packers finally took control of the game. Following a couple of effective runs by Eddie Lacy, the Packers ran a play action pass from under center that the Ravens safeties bit on hard. That left Nelson one-on-one with Ladarius Webb, who was expecting safety help to the inside and got torched for a 64-yard touchdown, putting the Packers up 16-3.

Flacco and the Ravens answered with a great 10-play, 82-yard drive on their next possession, culminating in an 11-yard touchdown reception by Jacoby Jones. Green Bay drove down the field again when they got the ball back, but were stopped in the red zone and had to settle for another field goal, making it a two-score game once again.

It appeared that the game was all but over inside of three minutes when the Packers' defense forced the Ravens into a fourth and 21, but the Packers' defense inexplicably let Tandon Doss get free and not only convert for a first down, but pick up 63 yards to get into scoring range. On the very next play, Flacco found Dallas Clark to bring Baltimore within a field goal of winning the game.

With three timeouts and the two-minute warning still working in their favor, the Ravens opted to kick off and play defense instead of trying an onside kick. That plan backfired as the Packers picked up two first downs to ice the game. Jermichael Finley ripped off a big 51-yard reception with most of his yards after the catch on a third and three play from inside Packers territory. That was followed up by three Eddie Lacy runs, the third of which saw him convert a third and two to allow the Packers to kneel their way to victory.