Analyzing A.J. Hawk: A Reminder that It's Never Too Late To Deliver

He's been the whipping boy of choice for years now, but A.J. Hawk proved on Sunday that he can still be a force to reckon with when he's on his game.

Share All sharing options for: Analyzing A.J. Hawk: A Reminder that It's Never Too Late To Deliver

Following what might have been a career game this Sunday, A.J. Hawk is going to be talked about a lot this week. People will ask if he's turned the corner. Or if without Clay Matthews (and now the rest of the starting linebackers) Hawk finally has the freedom to play how he needs to. I don't know about any of that. What I do know is that Hawk played out of his mind on Sunday. To recap, Hawk registered three sacks, 10 tackles (five for loss), and generally looked a lot more like the player most thought Hawk would be coming out of Ohio State as opposed to the Hawk we've seen over the last eight years. 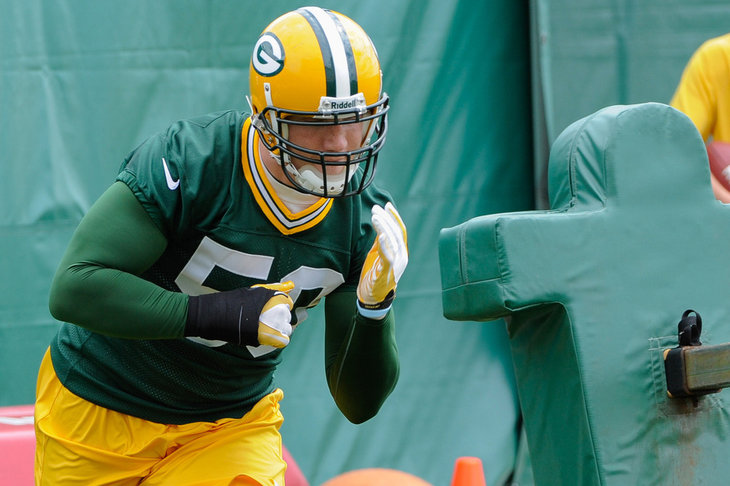 Tex got a chance to talk to the Packers linebacker this Spring to talk about the Packers' 2013 season as well as Hawk's football history and his charity work.

Certainly, history has shown us that Hawk is a good middle linebacker. He's been one of the most dependable defensive players in the league and though he's lacked what most would consider ‘splash' plays, he's been assignment sure (that dreaded description!) and one of the leaders on defense. In something I wrote last week, I compared him to Eli Manning. Never as great as his most staunch supporters would suggest, and yet, never as bad as his biggest detractors would say. Just good.

But that's all stuff we've come to expect from Hawk. It's a familiar narrative and for the better part of his career, it's been a polarizing one. Is Hawk an underrated leader whose stats don't tell the whole story? Or a gigantic draft bust? The answer as usual, lies somewhere in the middle, but it also beguiles a more important point about Hawk that I was reminded of Sunday. That at his best, A.J. Hawk is a really good linebacker.

(Hawk is) a dependable player who shows up every week, plays his guts out, keeps his head down, and occasionally has a game where he just blows shit up.

Of course, that's also been one of Hawk's biggest criticisms. That he's simply not at his best often enough. While that's a fair thing to say, it's a criticism that at this point, is outdated. We've known for a while that Hawk isn't an athletic freak that allows him to play like he did against the Ravens every week. Rather, he's an "ol' reliable": a dependable player who shows up every week, plays his guts out, keeps his head down, and occasionally has a game where he just blows shit up. I know it's easy to look at Hawk's draft position and expect more, but in an era where just as many high draft picks flame out as ‘make it', I'll take what Hawk brings to the table.

Some will say that with Sunday's performance, A.J. Hawk is finally becoming the player we all hoped for. Then again, maybe he already is. A player who, while not the one-man wrecking crew he was in college, has maximized his potential. As fans, we like to think that every player does that, but in reality, few do. Injuries get in the way. So do egos, off-field issues, work ethics, and a host of other factors. Not with A.J. Hawk. As I watched him Sunday destroy the Ravens offense as one of the only healthy linebackers the Packers have left, I couldn't help but see the irony: that despite being a player whose career has largely been defined by mediocrity, A.J. Hawk, by becoming the very best version of himself possible, is a rare bird indeed.