Jennings got his money, but at what cost?

Share All sharing options for: Catch-22: The Unfortunate Tale of Greg Jennings

In the wake of Sunday night's Packers-Vikings massacre, the prevailing question among fans and media types was this - just what did Greg Jennings tell Aaron Rodgers after the game?

It's a logical question given Jennings' long and recently contentious history with the Packers. But as the two players embraced, it wasn't so much what Jennings was saying that I was interested in. It was what he was thinking. What, in the purest, most honest part of his mind was running through his head, having watched his old team dismantle his new one? What did he contemplate as he walked off the field, having been relegated to a feckless impact both on the game as well as the stat sheet?

As a fan, I was hoping what most who felt scorned by Jennings' near-napalm job on the exit bridge to Green Bay hoped for. That in that moment following the final whistle, Rodgers rubbed his nose in it. That he gave Jennings one last, "Told ya so."

What Rodgers actually said we'll probably never know. But as I reflected on the game and that moment and even Jennings' exit from Green Bay as a whole, it wasn't vengeance I felt. It was conflict. Jennings has been far from a sympathetic figure in all this, but I'll be damned if seeing him stand on the sidelines Sunday night, I didn't feel a little bad for the guy. There he was, standing alone with his helmet off and an empty gaze in his eyes watching Aaron Rodgers surgically eviscerate his team's defense by throwing to guys named Jarrett Boykin and Myles White. Money has a way of masking difficult situations, but even with a contract that pays him 9 million dollars a year, this had to be a tough pill to swallow for Greg Jennings. 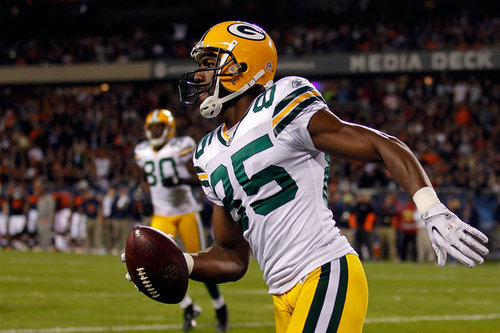 In a way, the Jennings/Packers split wasn't all that different from regular life. Everyone at some point has known a couple destined for failure. They fight constantly, they're unstable, they don't trust one another, and then one day you find out each is looking for a new apartment. In a watching-a-car-wreck kind of way, it's always kind of fascinating to witness these things play out. The Packers-Jennings relationship dissolved just as quickly and with just as many sparks. It was a divorce that, while most everyone could see coming, still left you wondering what would have happened had things gone a little differently.

For me, that's the great tragedy in all this, because when Jennings and the Packers were together, it was one of the most devastating marriages in all of football -- particularly between Jennings and Rodgers. Football is a sport that moves on incredibly fast, so it's natural the Rodgers-to-Nelson combo is today's main story. But there was a time in the not-so distant past when Rodgers-to-Jennings seemed like a match made in football heaven. Rodgers' razor-sharp precision and ability to buy time in the pocket was perfectly suited to Jennings' crisp routes and knack for finding space within defenses.

It may sound like I'm just reminiscing, but remember this? Or this?

Watching the game on Sunday, it was clear that the Jennings of old is still mostly around. He's still explosive off the line. He's still stronger than his size would imply and he's still fast enough to beat corners now nearly a decade younger. I know it's easy to look at Rodgers throwing darts to [insert former practice squad player here] and think the Packers don't need Jennings and his contract. After all, wide receiver is one of the luxury positions on this team, and with Jones and Cobb on their way back, who needs another?

That's fair. But with no receiving threat at tight end and Cobb's return still cloudy, it made seeing Jennings in purple all the more bittersweet. His drama is gone, but so is his ability to turn a wide receiver screen into 20 yards or get over the top on a safety. All debate about value and salary cap hits aside, it's hard to argue that the possibility of Jennings still playing for the Packers isn't at least intriguing. In a league that only grants so many chances at reaching the mountaintop, having Greg Jennings on your team doesn't hurt your odds.

That's all romantic hypotheticals, though. It never had to come to this and, depending on who you believe, it almost didn't. In the end though, Jennings got exactly what it appears he wanted: to distance himself from the Packers. Something tells me Greg never thought that distance - with the Packers surging toward another playoff berth and the Vikings floundering as one of the worst teams in the league - would be so chasmic.

As Jennings left the building before reporters could enter the locker room the other night, I wonder what Jennings, in his moments of reflection that anyone has after a bad day on the job, thought about more - his future or his past. Did he truly regret the thinly veiled barbs he made on the way out? Did he think about the inevitable chorus of boos he'll receive at Lambeau? How maybe, if things had gone differently, he'd still be catching those ropes from Rodgers? Still making Lambeau leaps and still euphorically embracing Mike McCarthy as the two celebrate another Lombardi Trophy? In that moment, I wonder if Greg Jennings thought about what could have been?