Josh Freeman and the Packers: the Case For Signing the Free Agent QB

Now that he's a free agent, one APC author takes a look at why the Packers should sign the former Buccaneers QB.

Share All sharing options for: Josh Freeman and the Packers: the Case For Signing the Free Agent QB

The Buccaneers mercifully put their relationship with starting quarterback Josh Freeman out of its misery on Thursday. For the Bucs, it gives them a chance to move on from what had become a particularly ugly situation. As far as divorces go, this one really did have all the goods. Drugs, lies, rumors and to round things out, a good old-fashioned smear campaign. Honestly, I didn't really think another team could out-Jets the Jets, but with Freeman, the Bucs came awfully close.

So now Freeman is, um, free (sorry) and of course, that brings with it - however remote it may be - the possibility that the Packers sign him. I've made my man-crush on Freeman no secret, but even beyond that, I think there are some very practical reasons why Freeman makes sense for the Packers now that he's a free agent. 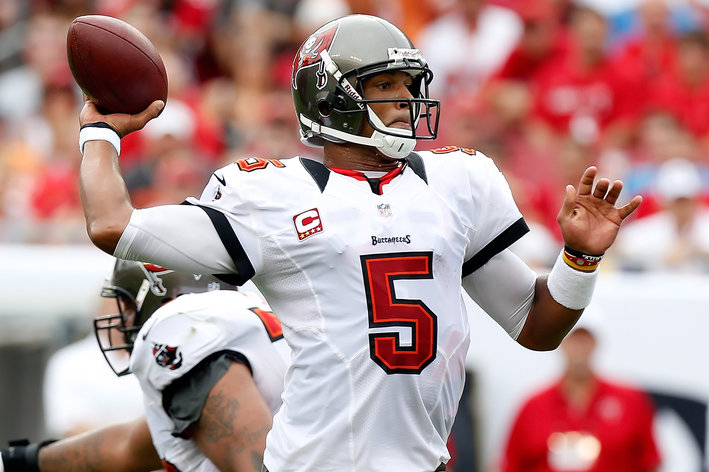 As opposed to trading for Freeman, an idea which we looked at a little while ago when Tampa Bay was shopping him around to other teams, signing him as a free agent is a completely low risk/high reward situation. Not only do you hold on to all your draft picks, but you're not on the hook for Freeman's $6.2 million he's still owed by Tampa Bay. In the short-term, you get a proven NFL quarterback at backup that if needed, could actually win you a game or two. Yes, Freeman would need time to learn the offense, but it's not like Seneca Wallace is exactly entrenched in the offense anyway. Plus, as ESPN's Rob Demovsky pointed out, there's already a Packers/Freeman connection with running backs coach Alex Van Pelt--he served as Freeman's quarterback coach for two years in Tampa.

In the longer term, it gives the Packers a potentially valuable asset to trade later on. Mike McCarthy is already renowned for his ability to build quarterbacks so even by sheer association, Freeman's value likely goes up - benefiting both Freeman and the Packers. Remember, the Packers are the same team that landed Matt Flynn nearly $20 million in guaranteed money based on two good performances. And if the Packers can sneak Freeman into a few garbage time blowouts and he shows a little something, they could potentially command a high draft pick from a team in need of a starter if Freeman does well.

Ultimately, whether Green Bay will have a chance to sign Freeman depends on whether he wants to be a starter again right away or if he's willing to work at his craft for a while. But at least one NFL talent evaluator thinks the Packers would be a good fit for Freeman, and I agree.