A day after signing with the Minnesota Vikings, former Green Bay Packers ILB Desmond Bishop discusses his old team, his injury, and why he choice to stay in the NFC North.

Desmond Bishop may have departed Green Bay a week ago, but he became truly became an ex-Packer on Monday when he signed a one-year deal to join the Vikings. Given his choice to remain in the NFC North, it was natural to wonder if the decision was motivated by a desire to seek retribution against his old team. According to the man himself in an interview on the NFL Network, that's hardly the case. 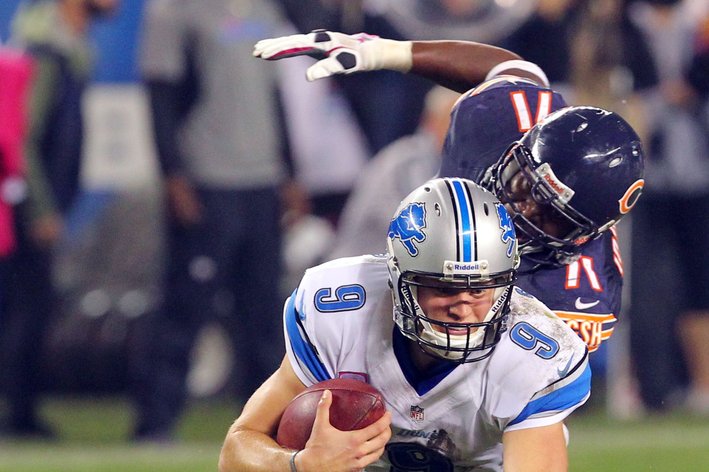 Former Bears DE Israel Idonije is moving to Detroit after signing a contract with the Lions on Tuesday.

While I suppose Bishop's quote is open to interpretation, his message seems pretty clear to me. He didn't have to refer to Aaron Rodgers "the best," nor did he have to say anything about Green Bay. Bishop simply could have stated that the Vikings offered him the best chance to start and play in the postseason. Considering the other interested parties were the Chiefs, Jaguars, and Giants, such would hardly have been a stretch. Instead, Bishop sounds like a highly motivated player who appreciates his old team. That point was even further illustrated by his comments about the Packers' remaining inside linebackers.

You know, it's a lot of uncertainty with me coming back off this injury, and the two guys who played -- A.J. Hawk and Brad Jones -- they did a really good job last year, last season so Brad was up (for a new contract), so they had to make a move with him, and I guess they went with the sure bet. He had a big year, he was healthy, and me on the other hand was coming off a serious injury. And there's not a lot of history on the recovery of these things so I guess they went with the safe bet which is understandable from a business standpoint, so I don't hold nothing against them.

Unlike some similarly situated players, Bishop has taken the high road when it comes to the Packers' decision to essentially choose A.J. Hawk and Brad Jones over him. Bishop concedes that the torn hamstring he suffered in the 2012 preseason was a valid reason for concern. The injury, coupled with the timing of Jones' contract, put the Packers in a position where they had to make a move on someone. This is simply the business of football, and Bishop understands.

Packers fans will remain split regarding Ted Thompson's decision to release Bishop until they see him on the field. However, there shouldn't be any split regarding the player himself; Bishop acted with class, intelligence, and passion. Other than two games a year, this is a guy whom Packers fans should continue to root for as a person.

NOTE: quotes were transcribed from the interview by Mike Vandermause of the Green Bay Press-Gazette.