As training camp approaches, we at APC take a look at the Packers' offensive tackles in the week's final self-scouting article.

The offensive tackle positions have been something of a concern for the Green Bay Packers over the past few years. After Chad Clifton retired following a terrific career of keeping Packers' QBs' blind sides clean, the left tackle position has been in the hands of Marshall Newhouse, who has not exactly endeared himself to Packers fans with his play. Bryan Bulaga took over for Mark Tauscher following his injury and subsequent retirement in 2010, and has manned the right side solidly over the past few years.

Now, the big question at the tackle position revolves around the coaching staff's decision to flip the line on its head and swap the tackle positions. With one established starter, the other position is very much open for competition and will be one of the most interesting battles to watch in training camp. 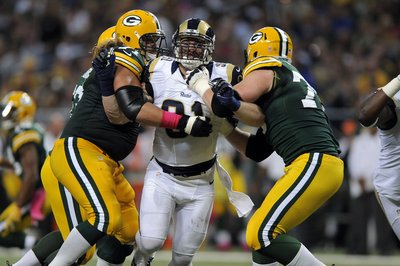 The Packers switched the players on the offensive line this off-season, moving Bryan Bulaga and Josh Sitton to the left side while T.J. Lang moves to right guard.

The Packers shifted Bulaga to left tackle from the right side this off-season, and there is no question that he is going to be the starter on Aaron Rodgers' blind side, barring an injury. Following a rookie year in 2010 in which he struggled early, he had a Pro Bowl-caliber 2011 season on the right side and was off to a good start in 2012 (aside from the San Francisco and Seattle games) but missed the second half of the year with a hip injury. That forced the Packers to rely on T.J. Lang and Don Barclay at that position until the end of the year. Now fully healthy, Bulaga will look to regain his form from 2011 to keep Rodgers upright.

The competition for the right tackle position is still open, with Newhouse moving from left tackle and Barclay starting the last 6 games of the regular season on the right side. Newhouse has had his struggles, especially against speed rushers, but he's still a better pass blocker than run blocker.

Barclay made the roster as an undrafted rookie from West Virginia a year ago and took over on the right side once Bulaga went down and Lang struggled outside. He's the opposite of Newhouse - a decent run blocker who struggled mightily in pass protection.

The third candidate is Bakhtiari, the rookie 4th-round pick from Colorado. He's a major unknown, but he did get some snaps with the first team at right tackle during minicamp and OTAs, and he should at least get some opportunities to show his ability in training camp. He's a long shot to start, but with the investment in him this off-season it's hard to imagine him being held off the roster.

Out of the Running

Sherrod, the first-round pick in 2011, has yet to see the field since breaking his leg late that season. At this point, it will be a positive for him to even see the practice field, let alone make it into the competition for the starting right tackle job.

Hughes was signed by Green Bay in February after spending much of the past two seasons on practice squads around the NFL. In his only substantial game action (a single game against the Seahawks while he was a member of the Rams in 2011) he was credited with allowing three sacks and committing one penalty. Perhaps the team sees some potential in him, but it appears unlikely that he will have any real chance at playing time.

The final candidate for playing time at tackle is Datko, a 7th-round draft choice in 2012 who spent all of last season on the practice squad. Datko played tackle at Florida State and dropped in the draft because of injury concerns with his shoulder. He appears to be out of the mix at tackle, though, as he spent almost all of his time working as a backup guard in OTAs and minicamp.

Tretter was defined as a tackle when he was drafted this season in the 4th round, but is looked at as more of a project inside at center or guard. In any case, he's unlikely to see the field in 2013 due to a broken ankle suffered on the first day of OTAs.