We continue our Packers training camp previews with a look at the most hotly-debated position on the team: inside linebacker.

Share All sharing options for: Packers 2013 Self-Scouting Preview: Inside Linebackers

It seems that every year the Packers' front office brass makes a decision on a player that induces a strong reaction from fans. In 2011, they let Cullen Jenkins depart for Philadelphia. In 2012, they released Nick Collins for medical reasons. Each choice brought out the emotional side of many fans.

This year, the Packers made four such decisions--all in the same position group.

A.J. Hawk, viewed as a perennial disappointment by some fans and a model of consistency by the coaching staff, restructured his deal to remain in Green Bay. Brad Jones, a starter for most of 2012, was re-signed to a three year deal. D.J. Smith was released this off-season after suffering a season-ending injury. Finally, and most significantly, Desmond Bishop was handed his walking papers following a hamstring tear.

The end result is that the depth chart for 2013 looks a lot different than anyone would have predicted a year ago. Here's the breakdown. 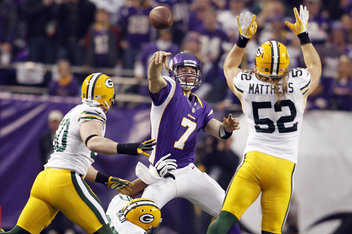 Read about how the Packers found a way to use A.J. Hawk and his fellow linebackers effectively in 2012, keeping Hawk on the field in run situations and substituting him out for a defensive back against the pass.

While many credit Ted Thompson's ego for Hawk's spot on the roster, it's the coaching staff's support that has kept the Ohio State product wearing green and gold. Hawk gets a bad rep for making all the tackles "seven yards down the field," but he's a heady player coming off his best season. Capers and crew feel safer with Hawk quarterbacking the defense than anyone else, and for that reason he'll remain a starter.

A year ago, very few would have predicted that Brad Jones would be a high-profile free agent this offseason. After Bishop was lost for the season to a hamstring injury, it was D.J. Smith, not Jones, who was pegged as his replacement. Smith played acceptably through six games before suffering a season-ending leg injury of his own. Jones took over and proceeded to become the team's best coverage linebacker. Now, with a new contract in hand, Jones is set to join Hawk as the unquestioned starters at inside linebacker.

As much as Hawk-protestors want a young pup like Terrell Manning or Jamari Lattimore to take his starting spot, that's just not in the cards for 2013. Hawk's job could be up for grabs a year from now, but for the time being he's the starter.

Out of the Running

You can categorize this group into two categories: Francois, and everybody else.

Francois is a veteran linebacker who the Packers rely on for special teams. He entered the offseason as a free agent but was unable to find an opportunity better than Green Bay. It seems unlikely that he's been told that he'll be given a chance to compete for the job, since the only way that happens is if Hawk or Jones goes down with an injury.

The remaining group is comprised of high-potential, inexperienced players with a combined 38 defensive snaps between them. The Packers are probably relying on someone from this group challenging for a starting job in 2014, but no one here is ready for that jump just yet.

None of this is to say that there won't be snaps available for Francois, Manning, Lattimore, or Barrington. The Packers have used extra inside linebackers in their sub packages before. If one or more of these players demonstrates the ability to hang with tight ends and slot receivers in coverage and/or create some push up the middle, Capers will get them on the field.