The focus shifts to the secondary in our Packers training camp position previews with a look at the young talent at the safety position.

Ted Thompson and the Packers organization have done good work in drafting and developing talent over the past few years. Such success in bringing in the right types of players that fit the system has resulted in a consistent flow of productive players, and more importantly, a consistent flow of wins.

Of course, as talent has flowed in to the Packers' locker room, talent has flowed out as well. Some of the Packer heroes of recent memory such as Charles Woodson, Donald Driver, or Greg Jennings have since moved on with their lives or careers while the younger talent took over for them as the organization began to move in new directions at various positions.

With all of that obviousness out of the way, one player stood out to me as a modern hero in the organization. He wore the number 36 in style and his name was Nick Collins. He was a hard-hitting, ball-hawking machine at safety during his time in green and gold. After attempting to make a tackle on one ill-fated September afternoon, the then 27-year-old Collins sustained a neck injury that would ultimately end his pro career. Collins was a Pro Bowl safety with the Packers and racked up 21 career interceptions. He would have undoubtedly been a leader in the Packers' secondary this season had he still been active.

With Collins out, the Packers had no other choice but to move forward by finding new leaders at the position. They did just that a year earlier by finding Morgan Burnett in the 2010 draft. He has stepped up well for the Pack, but the safety position as a whole is still somewhat in rebuild mode. The Packers have shown a lot of faith in Burnett, who recently received an extension worth $24 million over the next four years. This came after being one of two players to play every single snap in 2012. So now Burnett is a lock but the Packers are still sifting through their young talent to figure out who starts, who are the backups and who isn't going to make the cut. As of today, the safety spots are occupied by Burnett, M.D. Jennings, Sean Richardson, Jerron McMillian, Chaz Powell, and the rookie David Fulton. 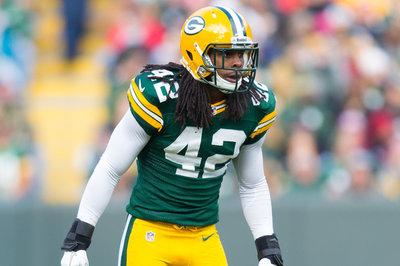 Click here for APC's full coverage of the deal between the Packers and their starting free safety.

It is no question that Morgan Burnett will be a starter this upcoming season. Again, after signing a new extension and playing every snap for the team last year, Burnett has proven himself durable and capable of taking on the reigns of leadership heading into next year. As he heads into his fourth season as a pro, Burnett is also the longest tenured safety on the team and the second oldest, behind the 25-year-old Chaz Powell, for what its worth. The former third round pick out of Georgia Tech hasn't made Packer fans forget about Collins but has done a lot of good in his time and is a starter heading into this season. Behind him, things aren't as clear.

It has already been reported that the battle for the other starting safety spot will be decided in a positional battle between M.D. Jennings and Jerron McMillian. Jennings is heading into his fourth season as a pro and saw a solid amount of snaps a season ago. In 2012, Jennings recorded a respectable 58 tackles (regular and postseason) and nabbed one big pick-six in a 24-20 win over the Lions. If there were a front-runner in this race, it would probably have to be Jennings.

Jerron McMillian should be in no danger of losing his roster spot by any means but getting a starting spot this year over Jennings could be a challenge. The two will have to duke it out in training camp and in the preseason but it should be Jennings' job to lose. However, Sean Richardson could also sneak into the mix as well here. At 6'2" 216, Richardson definitely has the size for the position over the other candidates. He is also the youngest of the bunch and is probably the dark horse as well. The three should each have an adequate amount of time to show what they have over the next month as they compete for the final starting spot.

Out of the running

At 25, Chaz Powell is the oldest in this bunch but is entering only his second year as a pro. He hasn't had much time in the system and that is probably why he won't start but after spending all four years at Penn State, he has had some time to mature as a player and should be one to look out for possibly in the coming years. He may even make the roster depending on how he performs this offseason. Also, he's from Baltimore, so he probably can hit ball carriers really, really hard.

Undrafted rookie David Fulton was picked up by the Packers in late May. The 6-foot, 196-pound rook comes out of Chowan University in North Carolina. Unless he really impresses the staff, his best-case scenario seems to be the practice squad for this season.

Stay tuned for our roster predictions coming later this afternoon.