Packers Keys to 2013: Can Nick Perry Save the Defense?

Entering his second year, Nick Perry could be a key component in bringing the Packers defense back to prominence.

Share All sharing options for: Packers Keys to 2013: Can Nick Perry Save the Defense?

If you've watched a game of Monday Night Football over the last few years, you've likely heard Ron Jaworski point out no fewer than 6,795 times that football is, "the ultimate team sport." To a degree, he's right. With eleven men on the field per team, football has a way of neutralizing individual contributions compared with say, basketball, or other sports. In short, one guy in football can only do so much.

But that's the regular season. Right now in training camp and preseason, we're witnessing what essentially is a 53-man audition. So far, we've seen some players stand out. Johnny Jolly is making fat guy interceptions, David Bakhtiari is making Ted Thompson look even better, and Eddie Lacy is making kinda-fat guy runs that we haven't seen in some time. But the guy that seems to have been lost among those other storylines however, is Nick Perry. If you forgot, he's the guy that nearly disintegrated Andrew Luck last year.

Yeah it's only one play, but geezus. Those kinds of plays are what many expected when Thompson took Perry in the first round of the 2012 draft. Of course, we know that he injured his wrist and only played five full games last year, but it got me thinking - could Nick Perry be the key to the Packers defense?

Let's go back to that original point about teams and individual players for a second. For the most part, the conventional wisdom has been that due to the parity in the league, individual talent can be somewhat negated. That even with a skillset as diverse and potent as RGIII's, head coaches and coordinators are always just one step away from ‘figuring him out.' But that line of thinking only accounts for the usage of players, not necessarily the players themselves. Like, remember when Ronnie Brown was a thing in the wildcat offense? A few weeks later every coordinator in the league remembered that, "Wait a minute, Ronnie Brown isn't good anymore" and the Dolphins went back to being the Dolphins.

So if innovation only lasts so long and head coaches spend 18 hours a day at work like sociopaths to ensure their opponent won't have a strategic edge come game day, what's really left? This is where what I call, ‘swing players' come in. While the majority of the league is made up of fungible players (think Brandon Chillar) who aren't spectacular, but are still serviceable, swing players represent the guys who give a team a differential advantage at any one position.

On the Packers, we know of two definitive swing players - Aaron Rodgers on offense and Clay Matthews on defense. We've seen what the team looks like without Rodgers (not pretty) and while plenty of factors impact a team on a year-to-year basis, it's hard to believe that the Packers ascension from the 20th ranked defense in 2008 to the 2nd ranked defense just one year later doesn't have a strong correlation with Matthews' play.

Obviously, it's easy to point to difference makers with gaudy stats like Matthews or say, Darrelle Revis, as being swing players, but not all of them are superstars. In fact, a swing player's value isn't always measured by numbers but in the ripple effect their play has on the rest of the team.

Take Justin Smith of the 49'ers. A traditional block-eating 3-4 defensive end, Justin Smith has been, until recently, one of the more unheralded swing players in the league. Again, his numbers might not be glamorous compared with say, J.J. Watt, but one could argue his impact in freeing up the Niners' linebackers to wreak havoc is just as important.

Another example of a swing player is Cliff Avril of the Seahawks (formerly of the Lions). Because he wasn't a high draft pick and doesn't routinely kick guys in the balls/face, Avril never quite got the same level of attention that former teammates Nick Fairley and Ndamukong Suh did. But here's the thing. Cliff Avril averaged double digit sacks over the last three years and gave the Lions defensive line - rife with big bodies - a speed rusher off the edge that opposing coordinators (and offensive linemen) had to account for. Certainly the in-game focus that Suh and Fairley command helped Avril draw more one-on-one matchups, but it works both ways. Avril helped swing the Lions defensive front into one of the more formidable lines in the league. Too bad for the Lions he couldn't play cornerback.

So is Nick Perry a swing player? For the Packers to be a top-tier defense once again, they need him to be.

Certainly other players like Casey Hayward or perhaps even Datone Jones can be swing players in their own right, but as recent history has shown, the teams that get to opposing quarterbacks are usually the more successful ones. At outside linebacker, no one is in a better position to do that than Nick Perry.

There are some numbers that suggest he's at least capable. His +3.2 rating in pass rush situations according to Pro Football Focus was fourth on the team last year, just behind B.J. Raji. And in just five games (he barely played vs. Houston), Perry tallied 10 QB hurries - more than Dezman Moses, D.J. Smith, Brad Jones and just two fewer than Erik Walden despite Walden playing more than triple the snaps. Even without putting up huge sack numbers, if Perry can just hurry opposing quarterbacks more often, the Packers cornerbacks should benefit by seeing more rushed throws - something the 2010 defensive backfield feasted on.

He's also in better shape to play the position. While it was kinda fun to watch the 270-plus-pound Perry try and power his way through right tackles like two bulls charging to lock horns, his pass rush ability should benefit this year from a more agile physique (down to 260 lbs.) as well as broader repertoire of moves including a nice pirouette he's flashed in training camp.

Clay Matthews with and without Nick Perry 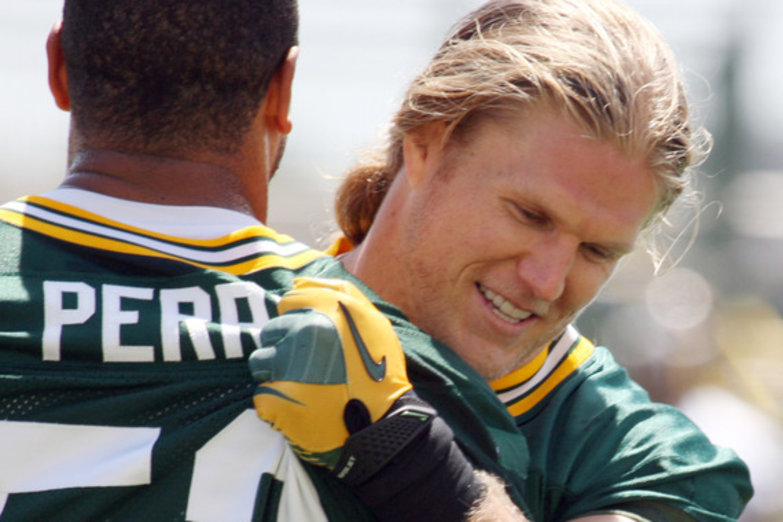 It also stands to reason that Nick Perry helps the guy who seems to least need it - Clay Matthews. Think about that. A better version of Clay Matthews. The Bears offensive line protects Jay Cutler with all the zeal of a toll collector, but still, Matthews' best game of 2012 also coincided with Perry's. That's not all on the Bears. Likewise, in the five games the two played together, Matthews collected eight sacks.

After Perry's injury, Matthews had five the rest of the regular season.

Again, there are plenty of other factors that go into that equation. Opponent strength, injuries, fatigue, etc. But when opposing coordinators have to worry about more than just Clay Matthews coming for their quarterback, it makes their job even more difficult. Call me crazy, but I don't think Erik Walden or Dezman Moses are keeping anyone up at night.

Whether Perry can become a swing player remains to be seen. He's still a bit stiff and his coverage skills while improved from last year, still need work. But if he can be the same player who sent Andrew Luck into oblivion last year more often, who knows. He might just swing the Packers fortune from playoff disappointment to playoff dominance.