With the Packers Lately, It's Always a Game of "What If?"

In a vacuum, the Packers recent loss to the 49ers was just one game. But does it speak to a larger issue at hand?

Share All sharing options for: With the Packers Lately, It's Always a Game of "What If?"

In sports, freaking out after a loss is a time-honored tradition as old as sports itself. While a good number of people find this annoying, I find it understandable. After doing responsible things throughout the week like going to work or school, cutting the lawn, suffering through Judy in accounting's story about her weekend and remembering to feed your kids at some point in the day, Sundays during the NFL season represent a deep well of emotional stock. If anything, overreacting to a game is just a therapeutic way for some people to deal with a loss, and move onto the start of their crummy week. What I do find annoying however, are the people who complain about others' reactions.

Basically, they're people complaining about people complaining. It's the ‘Inception' of bitchiness. Following this past Sunday's loss to the 49ers, the number one rebuttal to people expressing concern that the Packers once again just got kicked in the teeth was this: 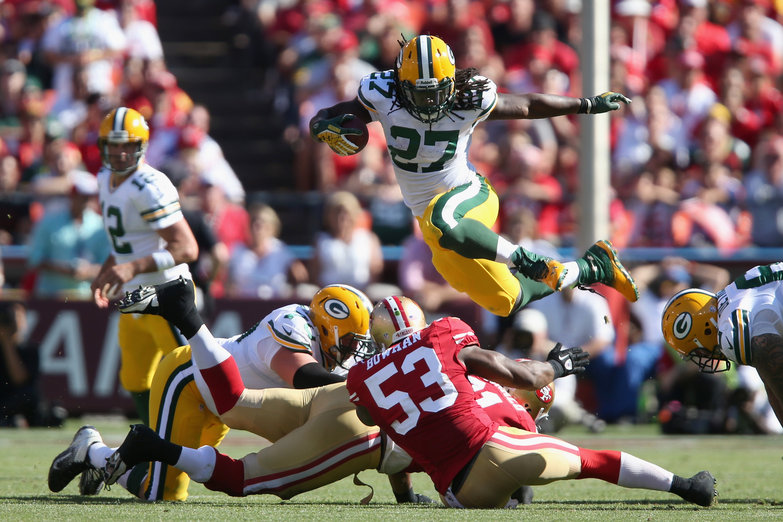 Josh VanDyke takes a look across the roster and grades each position on their performance on Sunday against San Francisco.

In a literal sense, they're right. This game marked four quarters of football that resulted in one team the winner and the other the loser. But here's the thing, it's not just one game. It's now been three in the last twelve months where the Packers showed up to play the same team (with the notable exception of the Niners QB changing) and wound up walking away with the same result. The only difference has been the location of their bruises. Colin Kaepernick and Co. have shown they're equally adept at bludgeoning the Packers as they are at surgically cutting them apart.

In a more figurative sense, this one game represents a more telling story. The one that starts with, "What if?" It's a statement that's followed almost every "It's only one game" comment from a good majority of callers, commenters and particularly, media members who seem to think their superior sense of composure somehow equates to a higher position on the totem pole of sports authority. If it weren't for the fact that I know they watch football, I'd swear these are the same people that brag about not owning a TV. So, let's take a look at some of those "What If"s?

What if Morgan Burnett and Casey Hayward had been healthy?

What if the referees had known the damn rules?

What if Boldin gets called for that blatant push off on 4th down?

That's just from Sunday's game alone. You could come up with just as many for the other two losses. And while all have value for the sake of argument, they're merely hypothetical in a practical sense. Which is to say, completely pointless.

The truth in the NFL is that every game will feature a number of What Ifs. Games are largely decided on just a few of them. Sometimes only one of them.

The variables may change, but the one constant is the presence of variables. Players will be injured. Players will get suspended. Players will spend the night drinking vodka from a stripper's cleavage and play like dogcrap the next day. It's the circle of life in the NFL.

With the Packers, those What Ifs have become more and more a part of their narrative since winning the Super Bowl in 2010. Yes, they've had plenty of success since then including a 15-1 season, but their losses seem to be far more dramatic than I can remember any of their wins being.

Even when the Packers took the lead 28-24, it felt like a little brother managing to get a shot in from being held at arm's length by his big brother.

They got outmuscled versus New York in 2011, looked like they were running in quicksand last year, and Sunday, though the scoreboard showed a six point loss, felt like a lot more. Even when the Packers took the lead 28-24, it felt like a little brother managing to get a shot in from being held at arm's length by his big brother. The ensuing drive that went 80 yards in just over two minutes said it all:

Big brother is done screwing around.

And while playing without two starters in the secondary certainly poses a logical ‘What If?' you could make the argument San Francisco - the winning team - had just as many. What if their leading receiver - Michael Crabtree - had been healthy? What if Mario Manningham played? What if Jordy Nelson's shoe lands one inch further to the right and goes out of bounds? How much do the 49ers win by then? Something tells me, it'd be more than six.

Again though, that's just hypothetical. What we know is the Packers are 0-1, which isn't a big deal. The slightly bigger deal - and what I'd assume is the primary cause of most fans' angst - is what we also know. The Packers can't beat the 49ers right now.

Maybe I should say that they haven't beat the 49ers, but as the team is currently constructed, I'm not sure I believe they can, either. I'd bet that same question has crept into at least a few of the heads within the Packers' locker room. Three times the teams as currently constructed have played and three times they've lost. The coaching has been better. The players more athletic. And just when the Packers showed they can take away one element of what the 49ers do, they prove they can execute other elements just as well. Scary stuff.

So maybe the question shouldn't be What If? But rather, ‘What?' As in, what exactly is it about these Packers that make them such a poor matchup with teams like the 49ers?

Is it coaching? There's certainly a number of who believe McCarthy is this generation's Andy Reid - a pretty decent head coach with an above average team that achieves just enough success to keep the band together. Only Reid never won a Super Bowl.

So if it's not coaching, is it the style of play? We've chewed over the ‘toughness' debate enough to turn what was once a reasonably juicy argument into rawhide, but still, examining the play of both teams Sunday showed that one team was no more physical than the other.

So if not style of play, is it simply the personnel? Well, maybe. Of all the things that can be individually identified, the personnel on both sides of the ball is the one area the 49ers seem to have an advantage. While it would have been unheard of to say even 8 months ago the reality is the Packers' biggest differential advantage in most games (Aaron Rodgers) becomes negligible against Colin Kaepernick. That's not to say Kaepernick is a better quarterback or even that he will have a similar career trajectory. But in their two meetings, Kaepernick has out-shined Rodgers, which is saying something considering Rodgers hasn't exactly been Gus Frerotte in these games.

So without their biggest trump card, do the Packers have what anyone would consider an advantage at any one position? The wide receiving core of Green Bay should be better, but Anquan Boldin even made that questionable. The 49ers offensive line is maybe the best in football, and in other areas like linebackers, defensive line and secondary, the 49ers would largely be looked at as the superior team when stacked up against Green Bay's individual units.

There are plenty of ways to spin the possibility that the Packers are right there with the 49ers but when looked at in an honest light, I don't see how anyone can reasonably come to that conclusion. "What If?" is an easy way to avoid the reality of the situation and convince yourself that had everything gone perfectly according to plan, that things may have been different. Thing is, those games don't exist in the NFL.

When stripped away of all the variables, teams are only left with a few foundational basics of winning. Being stronger, faster, smarter and healthier. It's fun to think about what could have been had the Packers been those things in any of the three matchups versus San Francisco but the hard truth is they haven't been. And unless something changes in the near future or the 49ers experience a sudden streak of injuries or dumb mistakes, I can't see the fourth meeting between these two teams being much different.

I'm not suggesting to know all the answers. That's for Ted Thompson to figure out. He's forgotten more about football and front office decisions than I'll ever know. Whether it's needing to break his mold and get more aggressive in free agency, or whether the Packers need more talent from their drafts, I don't know. I just know there's one thing they don't need more of.