We continue our film study on the Packers rookies with the team's second fifth-round pick.

Now that we have broken down tape on the Green Bay Packers' top two picks in the 2014 NFL Draft, I decided to take a look at one of my personal favorite picks this year - former Wisconsin Badger and fifth-round pick Jared Abbrederis.

For this exercise, I looked at Abbrederis' career-best performance, a 10-catch, 207-yard game against the Ohio State Buckeyes in early October of 2013. This game saw Abbrederis shadowed by Bradley Roby, a first-round pick in this year's NFL Draft. Note that I use the word "shadowed" because Roby was consistently behind Abbrederis play after play after play in this game.

In the interest of full disclosure, I attended this game in person, so watching the replays gave me a different appreciation for Abby's route-running and the thorough thrashing he gave Roby in the first half. After watching the tape, there is little doubt that route-running was the primary reason for Abbrederis' success on the day. He frequently used double-moves and head fakes to get separation from Roby, though he did most of his damage before halftime.

We'll start off highlighting a different set of skills, however, on Abbrederis' touchdown in the first quarter. It was concentration and toughness that got him into the end zone. Lining up in the slot, he fought off a tough jam from Roby at the line of scrimmage and was able to work his way the numbers, as you can see below: 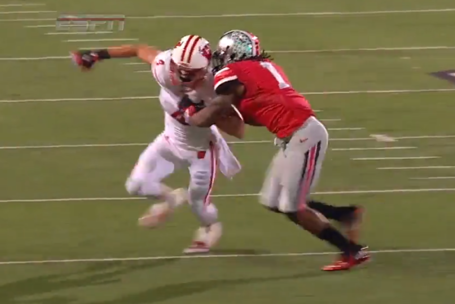 Joel Stave then threw a perfect ball, leading Abbrederis and allowing him to make the catch with his free arm while disengaging from Roby with his left, all while Roby had a hold of his jersey. He then fought off a diving tackle attempt, shook Roby free, and scampered ten more yards into the end zone. Here's the point of the catch itself: 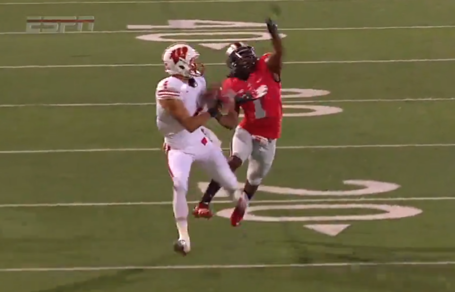 Now let's turn our attention back to his route-running. The two best examples came in the second quarter. In the red zone early in the second quarter, he showed a fade route to the corner of the end zone but cut out to the front pylon, shaking free of Roby. An NFL quarterback with a strong arm would have anticipated him coming free and delivered an on-target ball before he ran out of bounds; unfortunately, Joel Stave did not, and his lack of arm strength meant that Abbrederis had no chance to get his feet down in bounds after hauling in the pass.

The second of these was also mitigated by a poor throw by Stave, but on this play Abbrederis was still able to fight back for a completion, showing another critical skill in the process. He ran an out-and-up from the slot and on his second break, pulled a full four yards clear of Roby. Had Stave hit him in stride, it would have been an easy score; instead, the throw was very short, and Abbrederis had to come back for it. However, he made an acrobatic catch by attacking the ball at its highest point and coming down with a big first down reception. Here's his maximum separation, followed by an image at the point of the catch, after he had to adjust and come back to the ball: 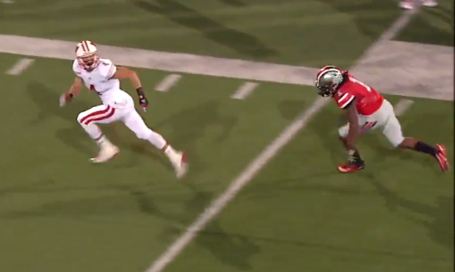 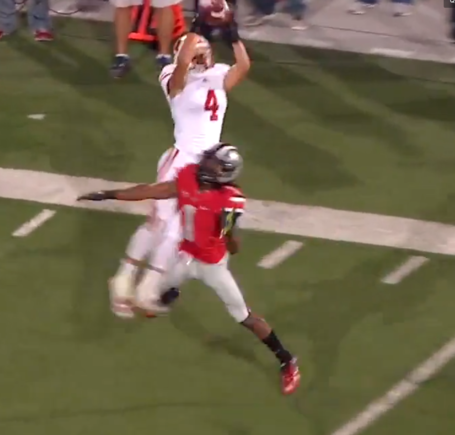 Abbrederis also shows a lot of toughness going for passes in traffic and over the middle. He caught a couple of quick slants in traffic, which helped the Badgers keep the chains moving when the Buckeyes switched into zone coverage. He made another tough, diving catch after drawing a holding penalty on Roby as he tried to release to the sideline.

Now on to his weaknesses. Despite his ridiculous stat line, Abbrederis' performance in this game was not wihout its flaws. Abbrederis relied on his ability to create separation almost entirely; when he had the ball with a tackler nearby, he was not very elusive. Late in the first quarter, Abbrederis found himself wide open due to a coverage breakdown (nobody within about 8 yards) and got a good block downfield. If he had a little extra top speed, he would have been able to beat the safety around the corner and pull away into the end zone; if he had a little better change-of-direction ability, he might have been able to make a move to shake the oncoming safety. Instead he was brought down easily along the sideline before he could turn the corner.

He also caught a wide receiver screen at one point and showed no inclination to try to break a tackle, instead being brought down easily once he got near the sideline. In fact, I think I counted exactly one broken tackle the entire game by #4, that being the one on the touchdown pass.

All in all, the book on Abbrederis matches up with what I saw on film. His route running is one of his greatest strengths, and he excels at getting separation from defensive backs whether lined up in the slot or on the perimeter. He runs a complete route tree and was equally adept on quick slants and curls as he was running out-and-ups. Furthermore, Abbrederis is willing to go over the middle and make tough catches in traffic. However, once he has the ball in his hands, he did not appear to be particularly elusive, and would not be racking up a ton of yards after the catch based on that ability. If he develops into a starting-caliber wideout, it will be thanks to chemistry with his quarterback and his ability to separate before the ball arrives.