Packers free agent tight end Jermichael Finley stated via his Twitter account that the Seahawks have offered him a contract.

Social media has changed the way athletes interact with the media. Instead availability being limited to mostly team-orchestrated events, players now possess the ability to voice opinions and make statements outside of the traditional confines of their teams and representatives.

Such was the case this afternoon with Packers free agent tight end Jermichael Finley. In a now deleted tweet, Finley rebutted the suggestion that the Seattle Seahawks chose not to offer him a contract during his visit last week. 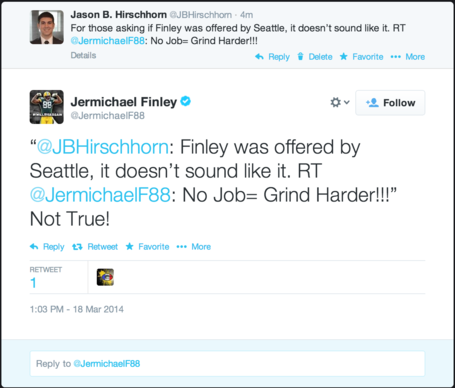 Given that Finley has since deleted the tweet, it suggests that either the Seahawks offer fell below the tight end's expectations or he believes a greater offer is still out there. As free agency is over a week old and most of the crazy spending has subsided, the former is the more likely scenario.