Quarterbacks and the secondary dominated the first day of the 2014 NFL Draft.

Share All sharing options for: 2014 NFL Draft Recap: Analyzing the First Round

Two themes dominated the first day of the 2014 NFL Draft.

As in most years, the quarterback selections were a focus of the draft coverage with ESPN, NFL Network, and everyone else scrutinizing every expression, phone call, and beverage choice.

While many believed UCF's Blake Bortles would be the first quarterback selected, few expected the Jaguars to make the pick (the third overall). The Browns choice not to draft a signal caller in the top 10 twice, first at their original pick (fourth overall) and again at pick eight. After Johnny Manziel made it past Dallas and Arizona, Cleveland made sure to pounce, trading up from pick 26 to 22. Finally, Teddy Bridgewater's long wait ended with the Vikings, a team considered a landing spot for the former Louisville Cardinal at pick 8, traded back into the first round to select him. 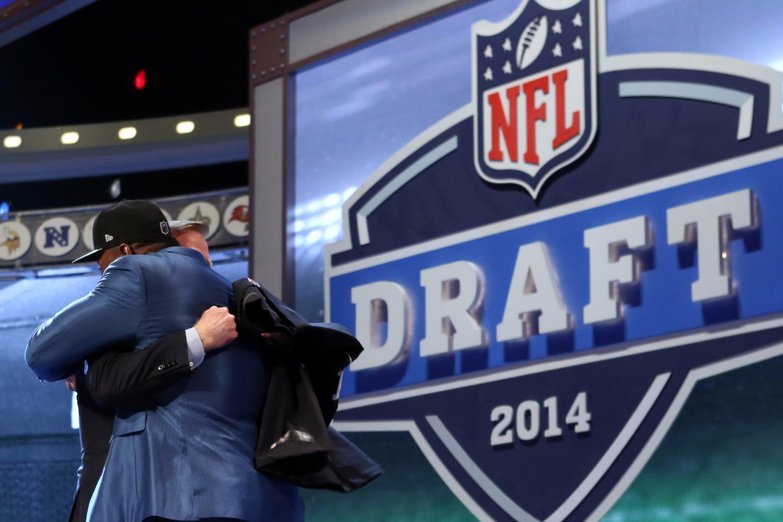 What stands out when you look at each selection is the inverse relationship between talent and price tag. Mocking the Draft ranked the three first round quarterbacks (1-3) Bridgewater, Manziel, and Bortles. The costs to acquire those players according to the Harvard Trade Value Chart were 401.3, 327.7, and 251.9 points respectively. By that standard, the Vikings made the best deal while the Jaguars, as is their wont, shot themselves in the foot. Obviously, much of this evaluation will change as the players take the field. However, as far as grading the process, it's hard to argue for Jacksonville.

The draft's other motif, defensive backs coming off the board in droves, made up over a quarter of the entire round. Cleveland started the run when they took Justin Gilbert eighth overall. The Bears followed suit six picks later by grabbing Virginia Tech's Kyle Fuller, perhaps the draft's most complete corner. No safety was selected until pick 18 where the Jets surprisingly took Calvin Pryor over the more decorated Ha Ha Clinton-Dix, who fell to Green Bay at 21. After the Packers landed the draft's top safety, the run on defensive backs moved into high gear with five going in the next 10 picks.

All of which makes sense. The NFL places a greater emphasis on the passing game than ever before, which in turn forces teams to compensate by locating defenders who can cover and/or slow down aerial attacks. The fact that perceived second-round talents like Deone Bucannon and Jimmie Ward came off the board on day one serves to reinforce that point. That's bad news for teams the Lions and Bears, each who badly need a rangy safety in their defensive backfields.