In our Open Thread for the 2014 World Cup, we find virtually no connections to World Cup countries besides the United States. So let's make some up and find a rooting interest or two for Packers fans if the USA gets bounced early.

Obviously, American citizens will cheer primarily for the United States in this year's World Cup, which kicks off today in Brazil. However, with one of the biggest (if not THE biggest) sporting events in the world taking place over the next several weeks, fans of American Football may want to find a secondary team or two to cheer for in the tournament, as the USA is not expected to escape the group stage. Therefore, we decided to look a little closer at the Green Bay Packers' roster to see if there are any connections between the most storied franchise in American Football to any World Cup participants -- beyond just the obvious fact that the Packers play in America.

But first, let's start off by imagining what the Packers' logo would look like if they played the "other" version of football, thanks to the great website Football as Football: 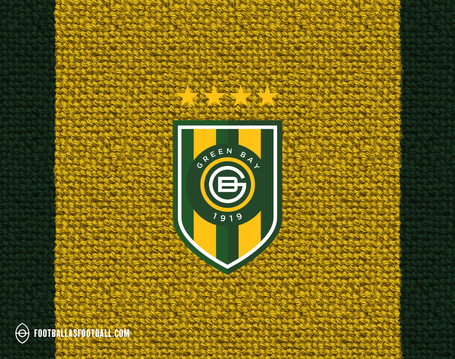 That's actually pretty slick. They have a bunch of other options over at the Football as Football site, so head over there and check them out.

To try to find a Packers or Wisconsin connection to Team USA, we first looked at the US Men's National Team roster to see if there were any Wisconsinites on it - sadly, there are not. The closest we get are midfielder Jermaine Jones, a Chicago native, and backup goalkeeper Brad Guzan, who hails from Chicago suburb Homer Glen.

Okay, so there's no connection there. What about the one Packer who we know was born outside the United States? Is Andy Mulumba's home country (the Democratic Republic of the Congo) in the World Cup? No? Okay, scratch that.

Are you a soccer noob who wants to get up to speed on the lingo? The mothership breaks down many of the critical terms and phrases for you here.

Really, the best thing I can come up with for a connection is a real stretch: Johnathan Franklin, Sam Barrington, and John Fullington all have names that sound like British nobility, so maybe they'll cheer for England. But probably not.

Finally, if we want to go by uniform colors, a few countries who primarily wear green and gold (or yellow) are Brazil (though their road shirt is solid blue) Australia (who also has the same weird blue thing), Cameroon, and Ivory Coast. Personally, I like the Aussies' shirts the better of the two, especially since the specific shades of yellow and green that they wear look pretty close to the Packers' colors.

Finally, I turned to Acme Packing Company's former site manager, Kevin McCauley, who is now one of SB Nation's top soccer writers and editors, to identify a country who reminds him of our Packers. He pointed me to Uruguay for two main reasons: first, it's a small country compared to most others in the tournament (which compares to Green Bay being the smallest professional sports city in North America), and it won the very first World Cup back in 1930 - and as a Packers fan, you know who won the first two Super Bowls.

There you have it. If you're looking for any team with a connection to the Packers, cheer for Australia for their colors or Uruguay for their historical similarity. Or, you know, just cheer for whatever country you have a personal connection to and ignore these admittedly flimsy parallels. In other words, your Packers fandom probably will have little to no bearing on what other country you support over the next few weeks, but pick one of those if you have no other reason to cheer for any other team.

Enjoy, and feel free to use this thread as your World Cup discussion thread. What countries will you be supporting?