Nothing used to rival the experience of going to the stadium. Not anymore.

Share All sharing options for: The NFL Stadium Experience: How Jacksonville's Big Idea Affects the Future of Lambeau Field

In one corner, you have the experience of attending the actual games. For years, the NFL and its franchises treated this experience as the holy grail of fandom. An untouchable, almost religious journey of sorts. As someone who's been to Lambeau Field more than a few times, I can't say they were wrong. There's an irreplaceable feeling of being at the games. The energy from the crowd. The smell of meats being seared on grills. The camaraderie of being amongst other fans.

From a pure, fan enjoyment standpoint, this is all very appealing. But in consecrating the stadium fan experience, the NFL and its franchises overlooked the rapidly growing threat of one thing: The couch.

Ok, maybe not just the couch, but the whole at-home couch experience. The comfort. The warmth. The non-urine soaked bathroom just 10 feet away. Of course, these are all conveniences that were available even when stadiums had a monopoly on the fan experience. So what changed exactly?

Take a walk into any fan's living room today and it looks the mission control room at NASA. You've got 70-inch screens, tablets, laptops, smartphones and surround sound. And that's just the hardware that continues to be more and more affordable. On the other end are platforms like social media that enable that technology even further. You're not just watching the game with the people in your immediate vicinity, you're watching with everyone in your Twitter feed. Adding to that experience are WiFi, second-screen capabilities, fantasy football integration, and the NFL's own Red Zone Channel - the ultimate convenience for the attention deficient.

So what are NFL teams to do about fans that opt for all these modern conveniences in lieu of purchasing an actual ticket?

The View from a Jaguars Pool Seat

Here's a virtual look at the EverBank Field playing surface from one of the new pools.

The View from a Jaguars Pool Seat

At least, that's what the Jaguars answer was by announcing last week that in addition to swimming, lounging by the pool, soaking in the sun and ordering drinks while laying on a beach towel, you can also watch a football game.

On the surface, it's a move that looks a lot like a desperate attempt to generate interest (i.e. ticket sales) in a team whose fan base is often cited as one of the two or three most apathetic in all of sports. But maybe this isn't just a stunt.

Now, I doubt we'll see poolside cabanas added to Lambeau any time soon, but that the Packers needed several corporate sponsors just to sellout last year's Wild Card game versus San Francisco was a good indication that even among the most hardcore fan bases, people have become less willing to sacrifice the creature comforts of the at-home (or at the bar) experience. There will undoubtedly be a large number of people (and there were) that view this as the continued wussification of America, but the "tough-guy" mentality that defines football on the field doesn't need to extend to the stands.

Not today. Not when we have technology at our disposal, not when we have more innovation in stadium design, and not when the grand total of tickets, food, beer and parking can run you half a mortgage payment without breaking a sweat. And that's just the literal cost. The other, for out-of-towners like myself, is the time investment of spending 4-6 hours on the road going to and from the stadium. 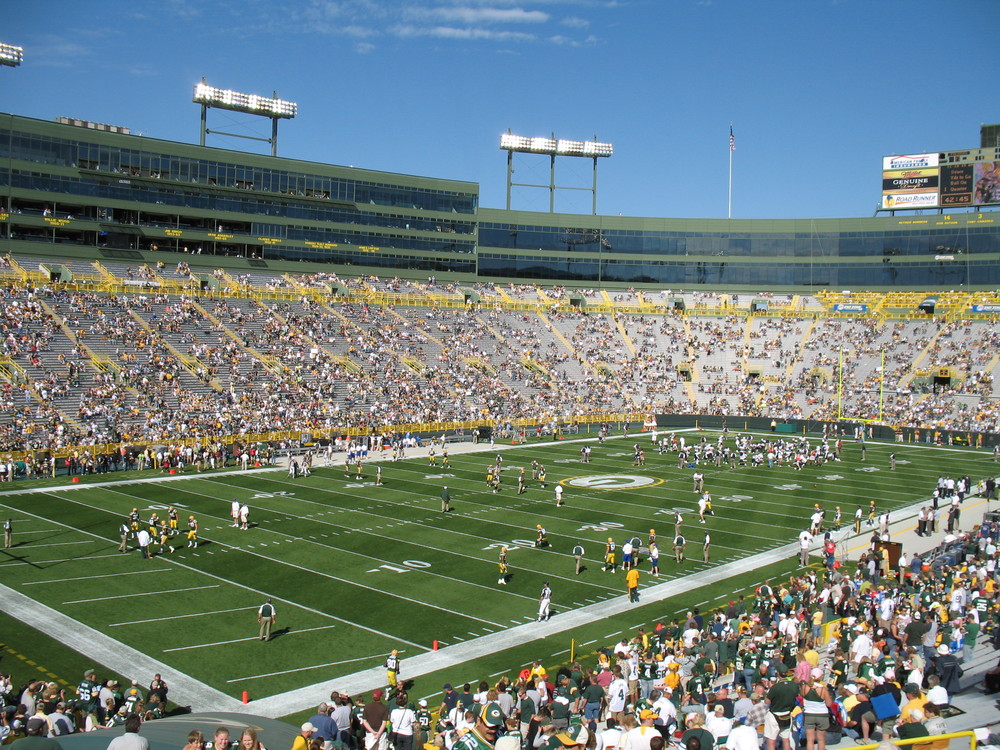 A blog covering the Buffalo Bills reached out to us for details about the Lambeau Field renovations over the past few years to get some context for some expected projects to remodel Buffalo's Ralph Wilson Stadium.

That's not to say making the trek isn't worth it. It's just becoming harder and harder to justify as the at-home fan experience continues to introduce more ways to enjoy the games. Poolside cabanas might be aimed at a slightly different audience than your typical stay-at-home fan (because they cost eleventy billion dollars) but the intent is still the same - give people more reasons to come to the stadium.

My assumption is that ideas like this will eventually trickle down to more accessible amenities - as well as other teams. And frankly, they probably have to. The NFL has never been the most progressive league, and several frequently-blacked out markets have already demonstrated that they'd rather enjoy a spread at home than pay $8 for a brat that's been sitting in a warming oven for an undisclosed amount of time or for a warm and watery light beer.

Certainly, the success of the football team goes a long way toward drawing fans to the stadiums, but it's also a bit of a double-edged sword. Teams that suck have a hard time getting people to the stadium. But teams that are uber successful typically charge more for tickets (especially on the open market), concessions, etc., putting the value of staying home on a kind of sliding scale. Yes, deals can be had, but for families unwilling to haggle with scalpers or spend hours online scavenging for tickets, it can be a difficult process.

So the question is, what's next?

Waterslides? Massage chairs? Nacho cheese pumps at the end of every aisle? (I'm fully supportive of all of these, for the record.) Probably not, but go back to that frigid Wild Card game last year. I was offered tickets for $50 each and you know what? I passed.

So did lots of other fans.  Obviously, the tickets wouldn't have been so cheap if the weather wasn't dangerously cold that day, but it got me thinking.

What would it have taken for me to go to that game? Heated bleacher seats? Easier access to the concourse to warm up? Those big-ass heat fans they have on the sidelines strategically placed throughout the stadium? The easy answer is that it would have taken warmer weather. But in a city like Green Bay, Mother Nature kind of does her own thing.

In other cities, the fan experience isn't necessarily impacted by weather, but there are other factors in play. Apathy to the team. More things to do outside of sports. Worse traffic. And so on.

Above all else, the number one thing threatening ticket sales is the at-home fan experience. Would it help if teams implemented more technology into the stadiums? If they had more premium suites like Jacksonville? What about more conveniences and amenities? I'm not totally sure.

But I think we're going to find out.