Aaron Rodgers is the starting quarterback for the Green Bay Packers, but on Twitter, his name is used on an account that has helped raise thousands of dollars for childhood cancer.

Social media – specifically Twitter – can be a cruel and harsh world a fair amount of the time. With egg headed trolls followed by the infamous failure to distinguish "your" from "you’re", the internet can be a dangerous place. On the other side of the spectrum, it can be used as a tremendous platform for individuals to establish and build their brand, promote their business, or help spread a message they may have.

One of those messages being sent through Twitter in particular is regarding the awareness of childhood cancer. A key figure in spreading this message is the Twitter account known as @N0tAaronRodgers, and the generous person behind the page has raised over $16,000 in donations through the internet because of social media. According to fastercure.org, cancer is the leading cause of death by disease among children below the age of 15 in the U.S.

So who is the person behind the page? That’s what a lot of people are pondering, right? Well, it’s Aaron Rodgers. All right, not really, but the mind behind the account is located in California, and that’s all I honestly can tell you. This person has helped add a phenomenal amount of money to a cause that hasn’t necessarily received the most wide-spread attention. So without revealing his/her identity, I connected with the creator to set up an interview to get more insight on how everything started along with more information on plans for the page going forward.

Below is a Q&A I conducted with the person behind one of the strongest and generous accounts among Twitter, NotAaronRodgers.

APC: First off, you're not really Aaron Rodgers, right? Can you tell people a little more about you?

NAR: No, I am not really Aaron Rodgers. But I am Not Aaron Rodgers. My biggest claim to fame is that I won my Jr. High Geography Bee, other than that I read a lot.

APC: Based on your tweets, you really dislike Jay Cutler. Who is on your Mt. Rushmore of current NFL players that you hate the most?

NAR: "Hate" is a strong word, but let's just say my Mt. Rushmore of current NFL players I cannot stand all look like Colin Kaepernick. For obvious reasons. Greg Jennings is also up there, but he is one of the out of focus guys.

APC: For those who don't know, what's the story that originally influenced you to start raising money for the MACC fund? When did you start?

Find out more about the MACC Fund (aka Midwest Athletes Against Childhood Cancer), the real Aaron Rodgers' charity work with the organization, and how you can help here.
(Photo from biztimes.com)

NAR: In October 2006 my sister (who was 17 at the time) was diagnosed with Ewing's Sarcoma. Like many other types of Childhood Cancer, Ewing's Sarcoma is a rare and deadly cancer that primarily affects teenagers and young adults. After countless doctors appointments and meetings with pediatric oncologists, my sister was about to begin chemotherapy when one of the specialists on her case decided to do a biopsy of the tumor growing on her femur. After a grueling 2 hour wait, the doctor emerged from the operating room and told us the greatest news I have ever heard: My sister didn't have cancer. "WAIT...WHAT?"

My sister had a massive infection called "Cat Scratch Fever" (Yes, like the song) that mimicked the cancer in blood tests, MRIs and X-rays. To say we were relieved is an understatement. I will never forget that day because of the relief we felt, but I will also never forget it because as I looked around the waiting room I saw so many families who wouldn't ever get to feel that same relief. My family got incredibly lucky, and ever since that day I have made it my goal to dedicate my professional, and a lot of my personal life to help children fighting these cancers so that they may live the lives they deserve to live, cancer free.

APC: If the experience with your sister never took place, do you think you'd be as active as you are for the cause today?

NAR: That's hard to say. Obviously I had an experience that changed the way I look at life and the way I live it. I don't know where I would be without having that exposure, but I am glad that I had it.

APC: You mentioned how you've dedicated your professional and personal life to help the cause, what is the biggest thing you've gained/learned along with way up until this date?

NAR: The biggest thing I have learned is that despite what you read, or see on the news, most people are good people, and that's refreshing.

APC: You've raised over $16,000 for the MACC fund since getting this thing started, does that amount blow you away? How does it feel to know you've been able to accomplish something like this?

NAR: I'm so grateful to everyone who has helped out, I never in a million years thought we would be able to raise that kind of money, but we did. It just gives me more drive to get more people out there educated on the work the MACC Fund does, and why donations are crucial to helping find more effective treatments and possibly a cure.

APC: During NFL season, you receive a lot of donations from fans (not even just Packer ones) on the web instantly, have you been surprised by the amount of support the page itself has gotten the last few months?

NAR: Yes, people are incredibly generous, even in the off season. People donate when they can, and I think it's awesome that this cause means just as much to others as it does to me.

APC: Has anybody in particular (athlete, celeb) sent you a tweet to let you know that they donated to your cause? Or a tweet acknowledging your page?

NAR: Jay Demerit (@D6MERIT) who is a pro soccer player from Green Bay has been really helpful and supportive of the cause. Jason Wilde discussed the parody with the real Aaron Rodgers on "Tuesdays with Aaron," just after the season ended, where Aaron congratulated our efforts. He said he doesn't take himself too seriously and gave me his consent to continue using the account. He also said I was "pretty comical from time to time." Ego boost.

APC: Besides your next fundraising goal of $20,000, what's the next thing you want to accomplish for the cause? 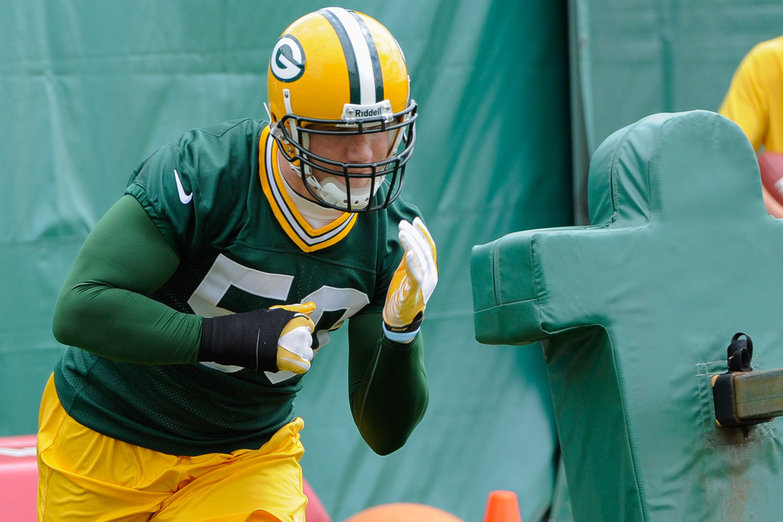 Aaron Rodgers is just one of many Green Bay Packers to participate in great charity work. Last spring, APC interviewed A.J. Hawk and discussed his Hawk's Locks for Kids charity, which provides wigs to children with cancer and other illnesses.

APC: What is something most people do not know about childhood cancer, but should know?

NAR: That's a tough question because so many people don't know how widespread, and devastating childhood cancer is. Childhood cancer research is VASTLY underfunded despite the fact that 1 in every 330 kids will be diagnosed with cancer by the time they turn 20 years old. Less than 5% of government cancer research funding is dedicated to childhood cancer every year, which is mind blowing to me when you look at the amount of kids being diagnosed.

APC: Since childhood cancer research is underfunded, what do you think (other than donations) can be done from people all over to help increase awareness for it?

NAR: Besides donations, I think education and conversation on Childhood Cancer are the most important means for awareness. I've met so many people on Twitter who have been personally affected by Childhood Cancer, and yet it isn't a topic you hear about often despite its prevalence.

APC: What message would you like to send to those reading more about what you do, and Packers fans?

NAR: I would say that anybody can help make a huge difference in the fight against childhood cancer. Whether it's a five dollar donation, or just a tweet letting your followers know about the cause, it matters. I have about 20 thousand followers, and together we raised over 16 thousand dollars. If you do the math you can see that each individual person matters, and that your support is greatly needed to help these kids in their fight.

We read tweets from many hilarious parody accounts (@NotBillWalton to name one), but not too many of those type of accounts help provide recognition for causes such as childhood cancer research. It's what separates this one above most, along with it being started by a Packers fan.

We're inching closer to the upcoming football season, so make sure to give the account a follow (it's closing in on 20K followers, too). And besides gathering donations, the creator of the page always provides wonderful commentary during/before/after games each weekend when the real Aaron Rodgers goes away.

Speaking of the actual Aaron Rodgers, he contributes to the MACC Fund as well. Just last May, he hung out with children before their "Evening with Aaron Rodgers" event and (via Lori Nickel of the Milwaukee Journal Sentinel), he said: "(Playing sports) gives you a platform and I think we as athletes need to ask ourselves, what are you going to do with that platform? Are you going to impact your world in a positive way? Or are you going to miss out on your opportunities? Personally I'm blessed to be a part of this incredible organization. I've been touched by these kids, and these individuals who are generous with their time and their money."

So if you have a cause or strong message you’d like to pass along, too, know that it can get across to people around the globe. Just remember, something small and simple like a Twitter account can help create something so strong and powerful, such as helping children fight the battle against childhood cancer.

If you want to contribute to Not Aaron Rodgers' campaign to raise money for the MACC Fund, click here to go to his donation campaign page.