The Packers' rookie safety is one of the top first-year players in the latest edition of the iconic video game.

Since it's safety day here at APC (apparently), let's take a look from a different angle at one of the Packers who plays that position.

Few things end up looking as arbitrary as players' ratings in sports video games, and assigning a rating to rookies is even more challenging and arbitrary.

Still, players and fans alike often love to debate these rankings, and thanks to EA Sports' Madden NFL 15, we have a new batch of these rankings to debate. Several first-round draft picks had their overall ratings released today, and the Packers' pick, safety Ha Ha Clinton-Dix, is one of them. Here's the promotional image from the game, which shows that Ha Ha has been given an initial rating of 79 overall: 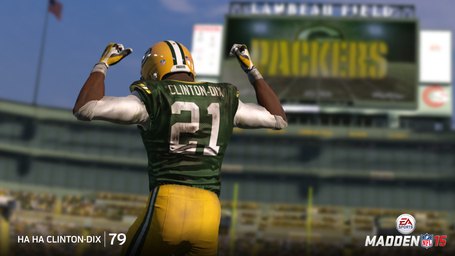 In addition to the overall rating of 79, a few other skills ratings were announced as well. Ha Ha earned an 85 for speed, 90 in acceleration, 84 in zone coverage, and 83 for hitting power.

This almost certainly makes Clinton-Dix the second-highest safety on the team. Based on ratings from last season's game, Morgan Burnett was an 85, while Micah Hyde was a 67 (LOL) and Sean Richardson a 65. Burnett will likely be in the low 80s once again, but it will be interesting to see Hyde's progression in his second year.

Last year's first-round pick, defensive end Datone Jones, started out as a 74 overall a year ago. It's safe to say that the Madden crew thinks that Clinton-Dix will have a bigger impact in his rookie year than what they expected from Jones last season. Furthermore, Ha Ha is tied with fellow safety Calvin Pryor of the Jets and a handful of other rookies for the 6th-highest rating among all first-year players.

Check out the video covering the top 13 rookies (the top 10, including ties) here:

Let us know what you think of the rating in the poll and comments below.