Packers fans can turn their wardrobe up to 11.

If you watched the Winter Olympics in 2010 or 2014 or the Summer Games in 2012, odds are good that you've seen something made by a company called Loudmouth Golf. The company, which started to gain a cult following after John Daly started wearing their gear on the golf course, makes a variety of clothing items ranging from pants and shorts to sportcoats and bow ties, all with a distinctively crazy flair to them.

Examples of their designs which have may have caught your eye in the past include the pants worn by the Norwegian Men's Curling team (whose members wore a different design for each of the round-robin games in Sochi) and the United States Men's Beach Volleyball teams.

If you like some of these designs, look out. We recently learned that Loudmouth, which is based in Northern California, has added green and gold-colored designs in some of their popular patterns, which should appeal to the Green Bay Packers fan who wants to add a little craziness to his or her wardrobe. They're also big Aaron Rodgers fans out there, as you might imagine based on their location, and that's at least a small part of the motivation behind these designs.

Here are the patterns that they recently released: 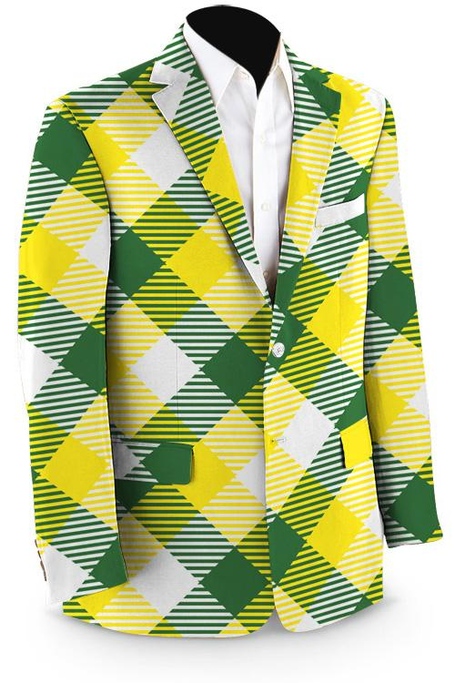 That's great stuff. All three of these patterns have been used in the past with different color schemes, but this is the first set using an exclusively green and gold palette. Furthermore, any of the designs can be ordered on any of the items Loudmouth offers, including pants, shorts, skirts, or jackets.

We reached out to Loudmouth for some comments on these designs, and they provided us with the following press release:

Be Bold in Loudmouth’s Green and Gold
​Loudmouth have released a line of green and gold patterns and these will really give fans something to cheer about! ​

San Francisco, CA - Loudmouth Golf the leader in bold and bright golf and lifestyle apparel ​is excited to ​announce their new Green and Gold collection. This collection consists of three new designs based on some of Loudmouths classic patterns, Green and Gold Paint, Green and Gold Splash and Vegeburger.

"We are thrilled that Packer Nation is excited about these Green and Gold patterns," says Larry Jackson, Chief Loudmouth. "We are big fans of Aaron Rodgers. He is a Northern California dude, who also plays golf, and is the most accurate passer in the league, especially wearing green & gold- what more could you want! Good luck this season and go Packers!"

Available in men’s and women’s under the Made-to-Order (MTO) section on the website. The MTO option lets customers customize the waist size and length of their pant, shorts, skort or mini-short to provide the ultimate fit. Loudmouth pants, shorts, skorts and mini-shorts are made in 97% cotton and 3% spandex.

If you need a really intense pair of pants to help you express your Packers fandom, you now know where to find them.

UPDATE: Loudmouth's entire stock of made-to-order gear is on sale through the end of August:

Loudmouth's Made-To-Order is on SALE! 10% Off until Aug 31. Use code: Made10 at checkout. http://t.co/ffqzRXVnf3 pic.twitter.com/p0ghSNBW7I