APC Tale of the Tape: Word Map and Commenting Stats for Packers-Titans

In a new feature, we take a look at the comments thread for the Packers' most recent game to provide a little insight into the APC community as a whole.

Share All sharing options for: APC Tale of the Tape: Word Map and Commenting Stats for Packers-Titans

Have you ever wondered what words are most commonly used by the APC community during a Green Bay Packers game? How about which user posted the most times over the course of a game? Well now you have to wonder no longer, as we're starting a post we call the APC "Tale of the Tape". Starting with this weekend's preseason opener against the Titans, we'll be illustrating those two things a day or two after each game, and we'll try to identify any oddities or interesting trends.

Here's a look at which words were used most commonly by the commenters in the game thread on Saturday. Note that I removed the words "Packers", "Titans", "preseason", and "game", since they were dominating the board. 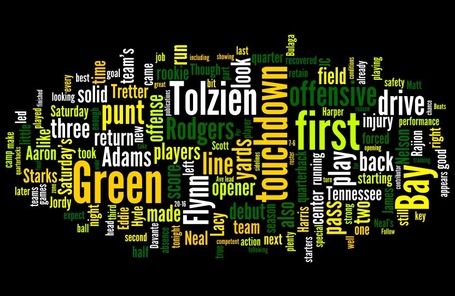 Good stuff, everyone. With it being a relatively decent game (thankfully with no major injuries to key players), everybody seemed relatively calm.

Congrats apparently go to BDU this week, as he posted twice as many comments on the game thread as any other individual commenter. You win this round, and one internet point. Four users broke the 50-comment mark, and we had 10 people with 20 or more. There were 649 comments total on the game thread, from 40 total users.

Let us know in the comments what you think of this idea, and if you would like to see any additional information in the future.