A topic that dominates Packers discussion every season is the health of outside linebacker Clay Matthews. In 2013, Green Bay's star pass rusher missed five games to injuries, including a twice-broken right thumb that prematurely ended his season.

Naturally, Matthews' thumb has garnered attention among the Packers beat writers. During Monday's indoor practice, ESPN's Rob Demovsky was able to snap multiple pictures of the extra protection the linebacker is wearing this year.

You can see a little bit of what Clay Matthews is wearing to protect his twice-broken right thumb. #Packers pic.twitter.com/Da7Cfz37OP

It's hard to tell exactly what Matthews is wearing over this thumb. From the Demovsky's photos it appears to be either heavy tape or some kind of stabilizing sleeve. In either case, it covers all of his wrist and the lower part of his thumb.

Some worry that this might inhibit Matthews' ability much like it did near the end of last season. However, this isn't actually the first time Matthews has worn extra protection over his right thumb.

Matthews actually taped up his right thumb during most of the Packers' 2010-11 Super Bowl run. Here's what it looked like when the Packers met the Falcons in the Divisional Round. 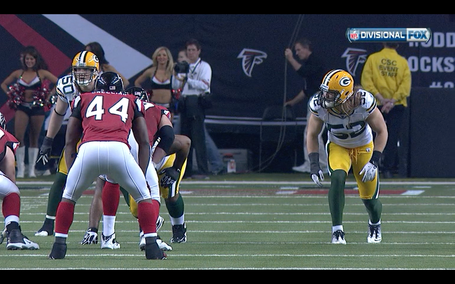 As you can see, Matthews thumb is no less restricted than it appears in Demovsky's pictures. During that playoff run, Matthews racked up 16 tackles, 3.5 sacks, and this forced fumble that will go down in Packers history as one of the key plays in Super Bowl XLV.

So while the health of Matthews' thumb is worth discussion, the protection his wears over it shouldn't be of too much concern.

Jason Hirschhorn covers the Green Bay Packers for Acme Packing Company. He also serves as a contributor at various publications. His work has previously appeared on Hook’em Headlines, Beats Per Minute, and Lombardi Ave.
Follow @jbhirschhorn