I asked Tex if I could write a running diary of tonight's game. He said yes.

Share All sharing options for: Chiefs vs. Packers Final Score: Both QBs Impress in 34-14 Packers Win

Embarrassing confession: This is the first game I've actually watched this year. Fortunately, I'm a veteran at this so I'm already in mid-season game-watching form: 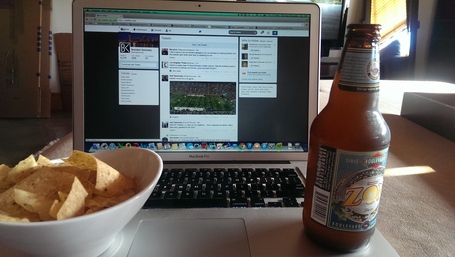 Here's this week's recap in "Retro Diary" format, a little different take than our normal recap, but hopefully an interesting one.

Hayward makes the first tackle of the game and his hamstring doesn't explode. Step in the right direction!

Still way too much space in the middle of the Packers defense, but Chase Daniel and his chins stall the Chiefs opening drive by sailing one pass high and one in the dirt two plays later. The great thing is, people here in KC would gladly toss Alex Smith aside for Chase Daniel.

Frank Zombo made a tackle. In other news, Frank Zombo is still in the league.

Flynn scrambles for 10 yards and a first down. A lot of people reference Tolzien's athleticism when it comes to who should be the backup QB, but Flynn is decently mobile himself. He's no Rodgers, but he's far from a liability.

And one play later, Flynn delivers a strike to Davante Adams for a 22-yard touchdown. There was some busted coverage, but Flynn sold the play-action, froze the middle linebacker and delivered a nice ball. Gotta think he's playing with the knowledge that Tolzien has some momentum. Take a look:

Clinton-Dix comes in like a ballistic missile and stuffs a run for no gain. I'm still not sure who the ball hawk is among safeties, but all three (Hyde, Clinton-Dix and Burnett) are all willing hitters. Could be worse.

Jayrone Elliott, ladies and gentlemen. One play after getting held, he manhandles the right tackle for a sack. Regardless of what Elliott becomes, his preseason has made him a mortal lock for the 53-man roster. If he keeps this up, I'm not sure how much longer the Packers can keep starting Nick Perry ahead of him.

DuJuan Harris getting action. It's kind of amazing just how different the running styles are of the three Packers running backs. Harris bounces around like a 200 lb. ping pong ball. Much different than Starks' one-cut, north and south style.

Overall 1st quarter impressions: The Chiefs aren't going to be good this year.

Packers continue their second drive with Flynn attempting a fade route into the end zone. He's taken 3 or 4 shots over the top now and every one has been off. Not sure if he's trying to prove something, but his game is clearly suited to throwing slants, outs, etc. Packers settle for a field goal and go up 10-0.

Booth announcers are interviewing Clark Hunt. He he, Clark Hunt. Also, I'm on my second beer.

Tolzien misses on a pass over the middle, but my god can he let it rip. The guy just has an arm. I still like Flynn's experience and composure (two things you basically need in your backup QB) but I can see why there are so many in the Tolzien camp. There are definitely a few teams in the league that would have to think about starting him.

And now on 4th and 3, Tolzien delivers a perfect ball over the top to Jeff Janis for a 33-yard touchdown. Beautiful placement, hit Janis right in stride. Yeah, this was the play:

I imagine keeping Rodgers out of trouble will be a point of emphasis this year so keeping 3 QB's might be a waste of a roster spot. But still, both Flynn and Tolzien have played well enough to earn a roster spot.

Jarrett Bush with a hugely athletic and savvy interception. Say what you will about Bush, the guy just keeps showing up. Can we start calling him zombie? HE. WILL. NOT. DIE.

And now bad-Tolzien shows up, putting a pass right in Van Dyke's bread basket, but he can't hold on to the INT. Packers settle for another field goal to make it 20-0. Andy Reid looking at his clipboard. He seems confused.

Tyler Bray follows up a gorgeous deep ball to AJ Jenkins with a 3-yard TD to Richard Gordon for a touchdown. Camera cuts to Alex Smith, who appears to be doing his best to seem like he's not incredibly nervous. Not like his job is actually being threatened, but you have to wonder what the plan is here in KC with Smith. Are they planning on giving him the Andy Dalton special for his next contract? See how he does for 8 games and re-evaluate? Smith gets way more criticism than he deserves, but the general sentiment in KC is this: There's no way we get to a Super Bowl with Alex Smith.

Ever since his touchdown pass, Tolzien has been hot garbage. Lucks out of an INT, and his last drive saw a pass sail somewhere near Door County, and followed that up with a poorly placed throw that got batted down. I like Tolzien, but his consistency leaves something to be desired.

Chris Banjo is still a special teams wrecking ball. Love that guy. Seems to revel in the position despite the lack of flash. It's great to have the highlight reel players that run fast and hit hard and do fun touchdown celebrations, but you need guys like Chris Banjo to win. He's the anti-Hank Baskett.

Michael Hill getting carries now with Matt Flynn back in. Both teams are playing the backups to the backups at this point, but it's worth mentioning just how good the Packers offensive line has been throughout the preseason. Backs consistently get running lanes and there's been very little pressure on either QB. And remember, this Chiefs team was carried by their defense last year.

At the very least, Adrian Hubbard could be a great practice squad candidate. Darted into the backfield on consecutive plays and got a sack on the latter of the two. His speed is actually kind of shocking for how long he is.  Has a homeless man's Robert Quinn kind of game.

Jayrone Elliott is down. *opens another beer*

Packers methodically work their way down the field thanks in part to a few Chiefs flags. Matt Flynn then dumps a screen pass off to LaDarius Perkins and he scampers for an 11-yard touchdown. Looks like the degenerate gamblers can feel pretty good the Packers covering the spread tonight.

Jumal Rolle has a nice interception taken away by Andy Mulumba who tried to give Aaron Murray the Mortal Kombat treatment with a blow to the head. Not the smartest play for a guy who hasn't been the most impactful so far this preseason.

The good news: Jayrone Elliott is back!

The bad news: Adrian Hubbard, who was fresh off a couple of pressures on the last drive, is down. He didn't stand out much in the first half, but Hubbard has been the best defensive player on the field in the 2nd.  I don't count B.J. Raji as a true, game-changing type of player so it's good the Packers haven't lost any of those types to injury yet. But their depth has slowly been chipped away this preseason.

Jordan Campbell - the linebacker for the Chiefs - looks like a crazed version of Jon Snow from Game of Thrones. ANALYSIS, folks.

After a Chiefs touchdown from the 3-yard line to make it 27-14, Jeff Janis takes a kickoff back 61 yards to KC's 39. Good blocking made a lot of it happen, but Janis' speed on kickoff returns is pretty electric. Still needs better vision, but he gives the Packers a viable return man who isn't a core part of their offense (like Cobb).

Tolzien back to finish things off and immediately goes to work. Has a good rhythm going with some underneath routes and caps the drive off with a pretty 6-yard touchdown to Myles White. Still think Janis has the edge for that 5th receiver spot, but White has easily looked like the more polished of the two tonight. He looked lost and borderline scared last year. He's running good routes and has a bit of swagger this year. I like this version of Myles White. Packers lead 34-14.

Chiefs have a touchdown erased by a Joe McKnight illegal touching penalty, but both Jumal Rolle and Tanner Miller looked bad. Poor coverage and even worse tackling. Both are unlikely to make the team, but still. Whiffs like that defined last year's secondary. McCarthy can't let it become an epidemic again.

Ok, so things are, um, not eventful here in the 4th but the Packers - barring any additional injuries - look like a team that should at least give the Seahawks some problems. Both lines playing well, still lots of depth. And finally have some additional pass rushers who can create pressure. I assume they'll build as the year goes on and the younger players gain experience, but they could win plenty of games early too.

The camera just cut to a Chiefs fan that did the whole tug-the-front-of-the-jersey, as to say, "I'M A CHIEFS FAN" which, is funny because remember this?

And that's it, folks. The Packers burn the clock to end the 2014 preseason. Wouldn't be shocked to see a number of cuts end up on other teams.

See you in Seattle next week.