How the Packers fill the void left by B.J. Raji is still unclear, but they have no concerns at wide receiver.

With the Packers' 34-14 victory over the Chiefs, the 2014 preseason is mercifully in the books. Green Bay may have lost a few players to injury -- their starting nose tackle and top reserve offensive lineman chief among them -- but for the most part this is a healthy team entering the regular season.

With the final roster cut looming and less than a week remaining before they travel to Seattle to take on the defending champions, the Packers have plenty of things to consider in just the next 24 hours.

Linsley gave no reason for worry

It would be a stretch to call him battle tested, but backup center Corey Linsley looked capable in his first and only start of the preseason. That's important considering that starter JC Tretter expects to miss at least the first quarter of the regular season with a knee injury.

Playing most of the first half, Linsley led an offensive line that played without starters David Bakhtiari, Josh Sitton, T.J. Lang, and Bryan Bulaga. Even while playing alongside inexperienced blockers, Linsley minimized mental errors (outside of one play where he ran the wrong direction) and demonstrated good anchor in the passing game and solid play on runs.

Without question, the Chiefs backups provide little of what the Seahawks will bring next Thursday. However, playing alongside Sitton and Lang, the two most veteran members of the offensive line, will provide stability for a young player like Linsley. He's not asked to be great, just to hold his water.

Where other teams attach their hopes to one or two receivers, the Packers under Ted Thompson have managed to fill their depth chart with viable options seemingly each and every year.

When Green Bay broke records for offensive production in 2011, the team's top receivers were Greg Jennings, Jordy Nelson, James Jones, Donald Driver, and Jermichael Finley. All but Nelson have departed, retired, or been sidelined indefinitely with injury, yet the Packers seem as comfortable as every with their depth at the position.

Thursday night's game was highlighted by contributions from two rookie Packers receivers - Davante Adams and Jeff Janis. At only 21 years of age, Adams had some hiccups early on during OTAs and minicamp, but as training camp and the preseason have progressed the Fresno State product has quietly found his stride. He scored his first touchdown on a post, finding the window in the Chiefs' zone defense between Phillip Gaines and Daniel Sorensen.

Not to be outdone, the tall and athletic Jeff Janis registered a touchdown of his own yesterday, his second of the preseason. Like Adams, Janis beat Gaines deep, this time on a fade route. A perfectly placed ball from Scott Tolzien landed into the receivers' outstretched arms just as he passed Kansas City's five-yard line.

And while Adams and Janis will make up the back end of the Packers' wide receiver depth chart this season, the team also has rosterable options in Myles White and Alex Gillett. Even though neither appears likely to make the cut, at least one could be stashed on the practice squad. Of course, that assuming they clear waivers, and with Ted Thompson's track record for finding receivers, that's hardly a guarantee.

At nose tackle, Guion is further along than Boyd

Losing starting B.J. Raji for the entire 2014 season may not have the negative impact of, say, an injury to Mike Daniels, but there are certainly big questions coming out of the preseason at nose tackle.

All this week, Mike McCarthy and the Packers' coaching staff expressed confidence that Josh Boyd would be part of the Raji-replacement plan. While one game won't convince them otherwise, Thursday night was a rough one for Boyd.

Against Chiefs backups, Boyd was neutralized at the point of attack, sometimes by only one blocker. In more extreme cases, the Chiefs pushed Boyd far off the ball: 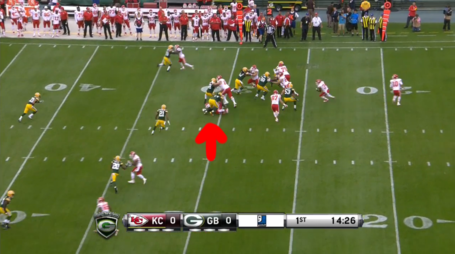 Boyd has the frame to and athleticism to handle nose tackle, but it's probably not fair to expect him to do so right away. He's worked primarily at defensive end since arriving in Green Bay in 2013, and playing over the center is simply a different monster.

The good news for Green Bay is despite less than a week of preparation, Letroy Guion looks ready to play meaningful snaps at nose tackle. The former Vikings starter won't make the Packers forget Raji, but he has enough size and burst to hold down the fort at nose tackle. Against Kansas City, Guion moved violently and gave Chiefs linemen trouble in the first quarter. At least while Boyd acclimates to the position, Guion is likely to take the lion's share of the snaps.

Jason Hirschhorn covers the Green Bay Packers for Acme Packing Company. He also serves as a contributor at various publications. His work has previously appeared on Hook’em Headlines, Beats Per Minute, and Lombardi Ave.
Follow @jbhirschhorn