The Packers made a crucial defensive adjustment on the fly against the Jets this past weekend that aided an 18-point comeback.

Share All sharing options for: A defensive adjustment secured Packers' victory over Jets

After giving up three touchdowns in as many drives to open Sunday's tilt against the Jets, Green Bay pulled out a rare 18-point comeback. The turnaround was as much the result of Dom Capers' in-game defensive adjustments as it was the resurgence of Aaron Rodgers and the Packers offense.

As such, Green Bay's defensive 180 was the opening salvo of this week's edition of The Takeaway. In it, I noted how Capers switched back to his traditional 3-4 defense midway through the second quarter, allowing the Packers to hold New York's offense to only a field goal the rest of the way. Unfortunately, I had the details wrong. Here's what I wrote:

Through the Jets first three drives, the Packers lined up primarily in "quad," their 4-3 defensive package. While quad had been lightly spoken of by the Packers before the season opener, McCarthy had hinted at it during the offseason when discussing Julius Peppers' role with the team. The idea of transitioning to better utilize personnel through a hybrid approach to defense makes sense on paper, but proper execution hasn't accompanied it.

Thus far, the numbers paint an unflattering portrait for quad. After a 4-3 heavy game plan washed out against the Seahawks to the tune of 36-16, the Packers' quad look surrendered 180 yards and 21 points before the end of the first half on Sunday. That yardage figure may have been higher if the Jets hadn't assumed possession for their first drive already within the Green Bay 20-yard line.

Sensing the gravity of the situation, the team responded by opening the defense's fourth series in their traditional 3-4 alignment, sticking with the defense for the remainder of the game. The results speak for themselves. In New York's final nine possessions, the Packers yielded only 132 yards and allowed only a field goal. More specifically, the Jets capable running back tandem of Chris Ivory and Chris Johnson struggled mightily to find holes against the Packers 3-4 defense.

Most of the quoted text is accurate. However, where I erred was by suggesting Capers switched to the 3-4 defense for most of the second half. Capers didn't actually call much 3-4 from the second quarter on. Rather, he made a different, similar adjustment that turned around the game for Green Bay.

During the Jets first three possessions, the Packers aligned in a balanced 4-3 with two defensive tackles shaded over center and two ends (not always in a three-point stance) lining up wide outside the tackles. 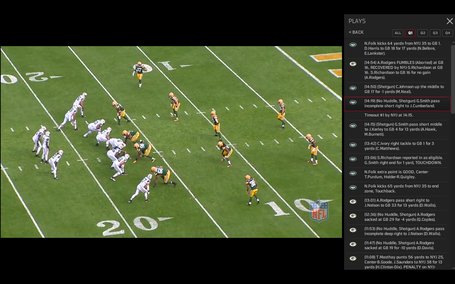 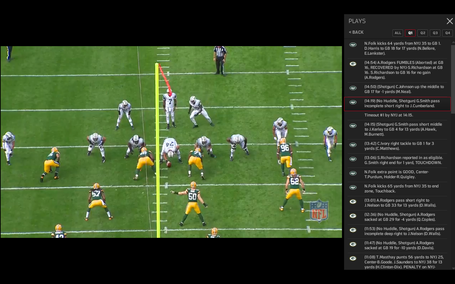 As you can see, Green Bay's defensive line consists of Letroy Guion and Mike Daniels over either shoulder of Jets center Nick Mangold, Julius Peppers lining up wide as a seven-tech, and Mike Neal positioned in front of a split out Jace Amaro. This 4-3 alignment is similar to those utilized by Chicago, Cincinnati, and many other franchises.

Unfortunately for the Packers, it was highly ineffective, especially against the run. The Jets gained 66 yards on the ground alone during their first three drives. Green Bay used mostly their balanced 4-3 package during those series.

Capers adjusted at that point, and the Packers next took the field in a different 4-3 alignment, one that proved far more effective during the final two quarters and change. 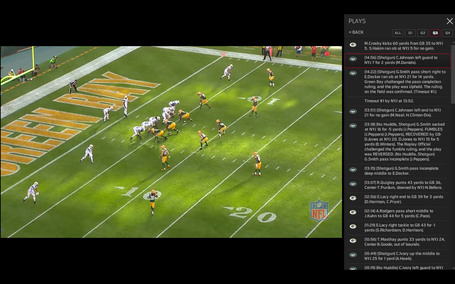 This is the look that tripped me up when I wrote The Takeaway. The Packers' defensive line is shifted over, placing Peppers directly over New York's right tackle, Guion at the three-tech, Daniels shaded over the left shoulder of the center, and Mike Neal at the Leo or "Elephant" as Green Bay refers to it. The linebackers perform a counter shift to move strongside linebacker Clay Matthews further from center, with A.J. Hawk and Jamari Lattimore shifting to fill the gaps.

This alignment, the 4-3 Under, looks and operates much like the Packers' traditional 3-4, but it allows for greater flexibility with personnel. More importantly, it all but shut down the Jets' offense and their previously dominant ground game. As noted earlier, New York produced only 132 total yards and a field goal during their final nine possessions Sunday, most of which came against the 4-3 Under.

Capers and the Packers deserve criticism for allowing the Jets to race out to an 18-point lead last weekend, but their in-game adjustments merit some praise as well. Few will take notice until Green Bay proves it can repeat that performance, but if the defense shows out against the Lions next week, the narrative will begin to change.