The Lambeau Field Advantage: What makes the Packers' home so special

Our Josh VanDyke recently visited Lambeau Field for the team's home opener against the New York Jets, and came away with a new appreciation for the home-field advantage that the Packers enjoy.

Share All sharing options for: The Lambeau Field Advantage: What makes the Packers' home so special

It had been 12 years since my last trip to historic Lambeau Field (or as I call it, the holy land of my sports fandom). A lot had changed during that time, from general manager Ron Wolf retiring, to Brett Favre moving on, and of course, the renovation to the actual stadium itself. 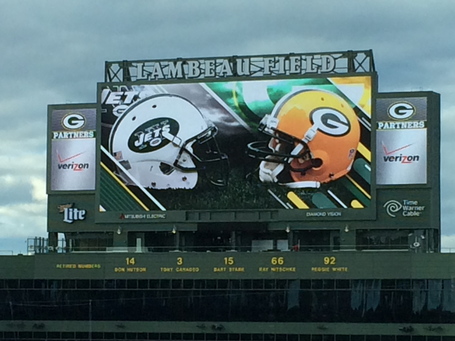 My family and I drove six and a half hours from our hometown in west Michigan to attend the Packers' home opener against the New York Jets, but the trip was worth every second that I spent sardined in the backseat of the family car.

We arrived at our hotel in Appleton on Saturday afternoon, and quickly unpacked so we could head directly to Lambeau Field and visit the Packer Pro Shop. My grandpa and grandma were waiting for us when we arrived, and we started our visit with a picture next to Vince Lombardi, and added some signature Lambeau Leaps next to the replica wall.

Inside the atrium, was a vast array of offices on the second floor, while visitors traveled to and from stadium tours, Curly's restaurant, and the Pro Shop on the floor below. The Pro Shop is essentially a warehouse of jerseys, apparel, toys, tools, furniture, and anything else you can think of colored green or gold with a "G" slapped on it.

We all made our purchases and signed up for the authentic stadium tour. We had to wait over two hours, but again, the wait was well worth it. I had visited Lambeau Field twice before with my grandpa, who is the inspiration behind my Packer fandom. We had never taken the time to go on the tour, so we were both excited to get an up close and personal look at the stadium and all the history behind it.

The first step on our tour was outside the Atrium, where our tour guide told us about the foundation of the Packers by Curly Lambeau in 1919, and how the original blue and gold jerseys were designed after Notre Dame's jerseys during that era. He then brought us upstairs to the suite level of the stadium and let us sit inside one of the marketing suites on the north end of the stadium. Our guide then explained to us that Lambeau Field was the second-largest stadium in the NFL, behind the Meadowlands in New Jersey (It would be Jerry World in Dallas, but it has 25,000 seats that are considered standing room only and the NFL doesn't acknowledge that as permanent seating).

From our view, the field looked pristine, the video boards looked brand new, and the entire stadium had a glow to it as the afternoon sun began to fall. The next step on our tour was the underground of the stadium, where photos of New City Stadium and Green Bay East High School hung on the walls to immortalize the journey the franchise has taken from a high school stadium that sat 5,000 to 6,000 to fans to Lambeau Field, which now seats over 80,000 screaming fans every Sunday.

The next step of the tour was easily the highlight of my weekend, if not my lifetime. As we walked towards the tunnel that leads out onto Lambeau Field, music started to play, and I heard a taped recording of PA announcer Bill Jartz say "Ladies and Gentlemen, your Green Bay Packers!" The adrenaline was running through my veins and for a second it felt surreal as I walked down the same tunnel that legends like Reggie White, Brett Favre, and Aaron Rodgers once walked. My grandpa threw his arm around my shoulder, and with a gleam in his eyes he said, "This is amazing." It was in that moment that I realized that just how special Lambeau Field is to every generation of Packer fans. 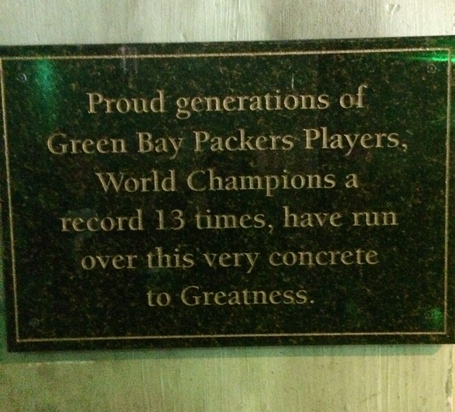 After several minutes of group photos, our tour guide led us in a "Go Pack Go" chant to showcase just how a simple chant by 10 to 12 people in the empty stadium carries and magnifies as the sound bounces off the video and scoreboards in the north and south ends of the stadium.

It's easy to see how the Packers are hard to beat when they have a crowd of over 80,0000 fans behind them every home game. Sunday proved that point, as the New York Jets were forced to take several ill-advised time outs due to lack of communication caused by crowd noise.

I'm no architect, but the new additions to the stadium seem to help keep some of the crowd noise inside the ballpark. It's not quite as ridiculous as CenturyLink Field in terms of noise magnification by stadium design, but it does help add to an already impressive home-field advantage that the crowd gives the Green Bay Packers.

Between the experience on gameday and the tour a day earlier, it's easy to see why fans rated Lambeau Field as having the best stadium experience in the entire NFL.