After all, what goes better on a nice baked potato than some delicious cheese?

It should be no surprise that the Green Bay Packers have the best-selling jerseys in the state of Wisconsin of any NFL team. If there were a report saying anything otherwise, it would be a sign that whatever numbers are being used to calculate sales are incorrect.

Naturally, states that are the home of an NFL team (or two) generally buy up that team's jersey's more than any other. The Bears in Illinois, the Broncos in Colorado, the Seahawks in Washington, those all make sense. It's when you get into the states that have no home team within their borders that it gets interesting.

And of all the states without an NFL team, one has bought more jerseys of Packers players than any other team, according to Dick's Sporting Goods' Jersey Report. That state is... 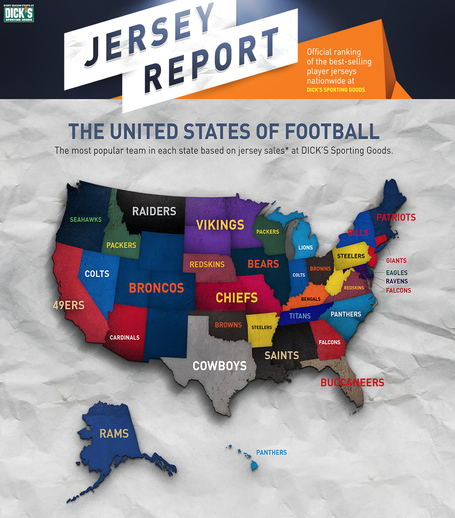 That's right, it's another state that's known best by many for its agricultural roots - Idaho! Our hats are off to our potato-loving brethren to the West.

So the next time you're looking for a perfect side to a good meal, go out and pick up an Idaho potato. But make sure to load it up with plenty of cheese and sour cream, throw on a Packers jersey, and raise a toast to the great folks in the Gem State.