Aaron Rodgers made a great play to diagnose a defense and set up Jermichael Finley's touchdown on Sunday.

In tough divisional games, the difference between victory and defeat often comes down to what happens when a gameplan, or sometimes an individual play, does not go according to plan. Tom Crabtree's touchdown on a fake field goal against the Bears was a great adjustment by Mike McCarthy to a defense that had stymied the Packers' offense. Early on against the Lions on Sunday, Aaron Rodgers made a great adjustment, beating a defense that had diagnosed a play perfectly to turn what looked to be an unsuccessful down into a Packer score.

The Packers offense was driving with the team down 3-0. From the twenty yard-line, the offense lined up in the following formation: 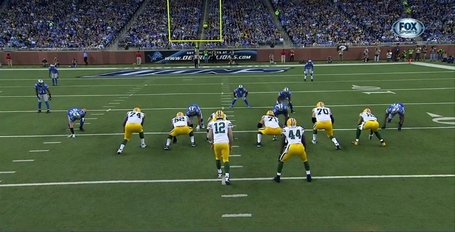 This is a pretty standard look for the Packers: Aaron Rodgers is lined up in the shotgun, flanked by a running back (James Starks). He has a tight end (Jermichael Finley) on the right side of the line, with Jordy Nelson wide right, James Jones wide left, and Randall Cobb in the slot to the left. 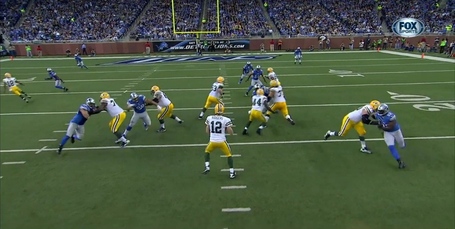 Here we see the formation shortly after the snap. Right tackle T.J. Lang has guided DE Cliff Avril deep and wide on the right side of the line, while guard Josh Sitton is setting up a lane for Starks to drop into, obviously setting up a screen pass. Rodgers is looking to his left, hoping to draw coverage away from Starks. Jeff Saturday is also moving to the right to get out in front of Starks and start blocking for him. The Lions' linebackers, on the other hand, have read the screen perfectly - they are staying at home in the middle and are getting in position to blow up the pass to Starks as soon as he gets the ball.

But hold everything! Jermichael Finley, appearing to get ready to block in this image, continues on a drag route into the middle of the field. As Rodgers scans back to the right, he recognizes that the defense is in great position to defend the screen, while seeing Finley release into the wide open middle of the field: 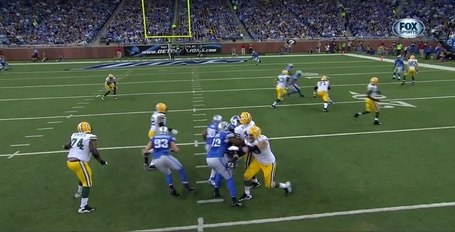 I mean WIDE open. There's no Lions defender within 15 yards of Finley when he catches the ball. In this shot you can see the screen being set up even more clearly, and the Lions' linebackers have no clue that the ball has just been thrown behind them to a wide open receiver in the middle of the field. After the catch, it's just a matter of Finley turning up-field and squeezing between a couple of defenders at the goal line to put six points on the board for the Packers.

On video, Rodgers appears to be looking left all the way to draw the linebackers that way. Only when he scans back across the field to look toward Starks did he see Finley getting open in the middle of the field. Once he did, there was no hesitation in hitting him with a quick pass that gave Finley the ball in space with room to make a play. In an interview after the game, Finley said that "We never, ever pass the ball (to the tight end there). Five years I’ve been here, we run that play repeatedly, never got to me." (Thanks to Jason Wilde of ESPN Wisconsin for the quote.) That tells you just a little bit about Rodgers' ability to improvise and understand exactly what options he has at his disposal on any given play.

This is another reason for Packers fans to be thankful that Aaron Rodgers plays quarterback for their team.