We examine one of the Packers' biggest plays from Sunday's game, which took place despite the team lining up a man short.

On Sunday afternoon, the Packers' special teams made another huge play, blocking a punt and recovering it in the end zone for a touchdown. This play was a great momentum-changer, as the Packers' offense had struggled a bit and continued to have issues as the game went on. But as Rob Demovsky astutely pointed out in the Green Bay Press-Gazette Sunday night, the block unit only had ten players on the field. Let's take a closer look at this play using the NFL's game film. 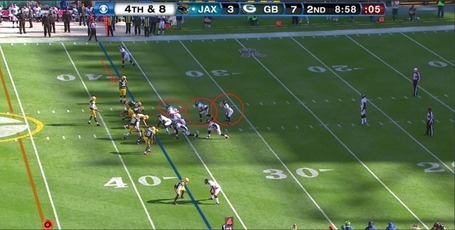 When the Packers line up, they have seven players around the line of scrimmage, Jarrett Bush lined up on the near side, Davon House on the far side, and Randall Cobb deep to return. The line from left to right consists of Jamari Lattimore, Robert Francois, Ryan Taylor, Sean Richardson, and Dezman Moses, with M.D. Jennings as a short safety and Casey Hayward showing rush from just off the right side of the line. As Demovsky noted, Jarrett Boykin is likely the missing player on the unit - my best guess is that he would have lined up with House to block the gunner on that side of the field. In all likelihood, Boykin blocking downfield would not have made any difference in the result of this play, but it does makes it sound more awesome that the block still worked with ten men on the field. Shortly after lining up, House shifts in tight to the line as indicated, leaving the gunner unblocked. Three different Jaguars (circled), the right tackle and the center and right backfield protectors, all point to House at various times after he shifts in to call attention to him. 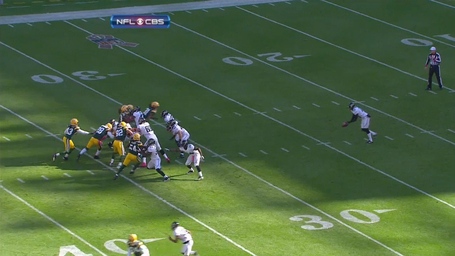 Shortly after the snap, we see a great rush design take shape. Hayward drops back to block. House rushes, accelerating off the left side of the defensive front. The outside lineman on his side has engaged Francois on the inside while allowing both House and Jamari Lattimore (who is hidden behind Francois in this picture) to continue their rush on his outside. Sean Richardson, who was lined up over the left guard (number eighty-something), has run a stunt and is now rushing over the right guard. This takes the left guard and the left backfield protector almost entirely out of the play, as the Packers now are rushing five people on the right side of the line against five blockers (M.D. Jennings is behind the rush, but isn't really contributing here).

This rush design confused the Jaguars' protection from the start. With three rushers over or outside the tackle, the right tackle must take one of the inside men, and chooses Francois. The left guard has pulled behind the center to get in position to block Richardson while both the right guard and center are occupied blocking Ryan Taylor. With Jennings well behind the play and not affecting the rush, the right and center protectors in the backfield need to shift outside to pick up the other two rushers. The center protector does not move at all, leaving the right protector on an island against two opposing players.

This player has a choice: block Lattimore or House. Lattimore is caught up trying to get around Francois and the tackle, but House is sprinting unopposed off the edge. In this case, the center protector's failure to shift is compounded by the right protector making the wrong decision to block Lattimore. This allows House to continue his path to the punter with no Jaguars laying so much as a hand on him.

It appears that there was a serious miscommunication by the Jaguars' punt team, with the lineman and the back failing to understand who has responsibility for outside rushers in this situation. Either way, it is a combination of a great rush design by Shawn Slocum and a mental mistake by the Jaguars' backfield protectors that allows House to have the opportunity to attack the ball. 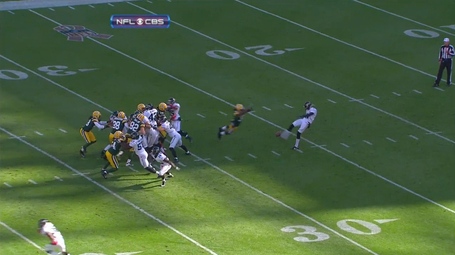 This shot shows House's excellent attack angle to the ball and excellent closing speed. He has quickly passed the blockers and turned the corner, and he now makes a perfect approach for the block. He is nearly perpendicular to the punter's leg, ensuring that even if he does miss the ball, he will not make contact with the punter and draw a flag. House makes an excellent leap, deflecting the ball with his arm, and then it's a free-for-all that ends with Dezman Moses falling on the ball for a touchdown.

Ultimately, House makes the block because of three factors: an excellent rush design which overloaded the right side of the line, an apparent mistake by the blockers in the backfield, and his own speed and athleticism that allowed him to close on the ball and make a great, clean block. This play is yet another example of how far the Packers' special teams have improved from a few years ago.