The Takeaway: Reactions and Recaps from New York Jets vs. Green Bay Packers

Sunday's home opener appeared over before halftime, but the Packers made several key mid-game adjustments to reclaim the day and earn a win over the visiting Jets.

Share All sharing options for: The Takeaway: Reactions and Recaps from New York Jets vs. Green Bay Packers

When a team finds itself trailing early in a game by three scores, the most important concern becomes mid-game adjustments. Such was the case Sunday afternoon when the Packers allowed the visiting Jets to jump out to a 21-3 lead early in the second quarter. Neither Green Bay's offense nor its defense appeared capable of slowing down New York, and the atmosphere at Lambeau Field and on these very webpages spiraled into a recall effort on Mike McCarthy the play caller and defensive coordinator Dom Capers.

However, the Packers did make adjustments, several of which altered the outcome of the game.

"Quad" defense almost killed the Packers Sunday, but the 3-4 saved them

[The details of the Packers' defensive adjustment, including whether they switched back to a 3-4, is the subject of this new post that we recommend you read before continuing. - Ed.]

A common, sometimes justified criticism of Mike McCarthy and his coaching staff concerns the effectiveness of their mid-game adjustments to their opponent. Finding themselves down 21-3, Green Bay's coaches indeed made adjustments on the defensive side, and they helped secure a Packers comeback.

Through the Jets first three drives, the Packers lined up primarily in "quad," their 4-3 defensive package. While quad had been lightly spoken of by the Packers before the season opener, McCarthy had hinted at it during the offseason when discussing Julius Peppers' role with the team. The idea of transitioning to better utilize personnel through a hybrid approach to defense makes sense on paper, but proper execution hasn't accompanied it.

Thus far, the numbers paint an unflattering portrait for quad. After a 4-3 heavy game plan washed out against the Seahawks to the tune of 36-16, the Packers' quad look surrendered 180 yards and 21 points before the end of the first half on Sunday. That yardage figure may have been higher if the Jets hadn't assumed possession for their first drive already within the Green Bay 20-yard line.

Sensing the gravity of the situation, the team responded by opening the defense's fourth series in their traditional 3-4 alignment, sticking with the defense for the remainder of the game. The results speak for themselves. In New York's final nine possessions, the Packers yielded only 132 yards and allowed only a field goal. More specifically, the Jets capable running back tandem of Chris Ivory and Chris Johnson struggled mightily to find holes against the Packers 3-4 defense.

While the idea of quad is intriguing, the Packers do not appear able to work it successfully. Given that Dom Capers' preference for the 3-4 and the success he manufactured once Green Bay returned to it, expect to see much more of that scheme in future weeks and a lot less of quad.

Another mid-game adjustment that worked out for the Packers was McCarthy's decision to supplant starting X receiver Jarrett Boykin with rookie Davante Adams during the second quarter. While he wasn't the only Green Bay receiver to struggle during the first half, Boykin failed to separate from the Jets mediocre defensive backs too often while in the lineup, prompting a move to the more dynamic, albeit inexperienced Adams.

The move likely traces its roots back to the Seattle game. While Aaron Rodgers never attempted a pass in Richard Sherman's direction that night, Adams managed to beat the All-Pro corner on double moves during the third quarter. On one particular play, Adams baited Sherman on an in route before cutting back into the seam. Unfortunately for the Packers, Rodgers decided to throw 40 yards across his body to a covered Jordy Nelson in the end zone, a pass that was nearly intercepted.

While Adams didn't garner his quarterback's attention on that play, his coaches certainly noticed. Against the Jets, the Packers utilized Adams on a number of routes and from multiple positions on the field. His first two catches after replacing Boykin came off a quick hitch and an eight-yard curl, routes Adams ran routinely at Fresno State. In both cases, No. 17 lined up on the same side with Randall Cobb, a sort of safety net given Adams' inexperience. Later on, Green Bay isolated Adams on the right boundary, setting up his biggest play of the game.

On third-and-ten late with under a minute to play in the second quarter, Adams ran a slant in front of New York defensive back Antonio Allen. Rodgers hit him in stride, and the receiver went 21 yards before contact, 24 in total on the play.

The play is indicative of the rookie's potential. With his quickness, strong hands, and big body, Adams possesses the physical tools to become the Packers' best over the middle receiver since Greg Jennings. In the same way that the Bears utilize Brandon Marshall's massive frame and basketball hops to bully defensive backs, a more refined Adams should abuse defenders with regularity. The only question is his development arc, and by moving him ahead of Boykin, the process can be expedited accordingly.

While Davante Adams may develop into a dominant receiver, Jordy Nelson is already there. Most wideouts gifted with Nelson's frame, speed, and body control rely primarily on those qualities, the Packers' top receiver gave a tutorial on how to create separation when the defender has you dead to rights.

With the Packers facing a third-and-four and already trailing the Jets 14-0, Nelson clowned New York cornerback Darrin Walls into a beautiful 23-yard catch. Nelson baited Walls twice, first on a three-yard inward cut, then by darting back to the sideline and up for a textbook in-and-out fade, creating a modicum of horizontal separation. He then shifted into top gear to add a little space vertically between him and the defender. Recognizing the cut to the outside, Rodgers threw a high pass towards the sideline, and Nelson attacked the ball vertically to secure the reception: 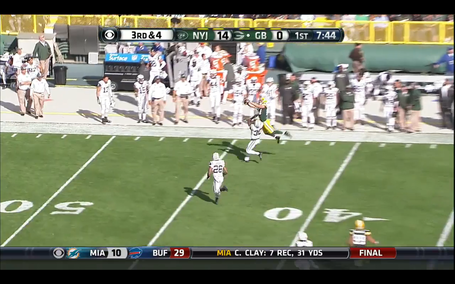 Only a handful of wideouts possess the physical skills to make that play, and even fewer can combine the receiver skills to open up that passing window and high point that pass. The Packers are fortunate to have one of those players in Jordy Nelson.