Packers Training Camp Battles: Don't Give Up on James Starks Quite Yet

Through three days of training camp, a familiar name has been the running back who's stood out most.

Share All sharing options for: Packers Training Camp Battles: Don't Give Up on James Starks Quite Yet

If James Starks is going to be the odd man out at running back, it would appear he has no intention of going quietly. Coming into this weekend, Starks was looked at by most as a bit of an afterthought, a perpetually broken-down steed among a stable of new thoroughbreds. Eddie Lacy brought SEC prestige. Jonathan Franklin showed up with UCLA records and ‘steal of the draft' talk behind him. Even Alex Green and the excitement of DuJuan Harris - last year's running back du jour - trumped the momentum (or lack thereof) that James Starks brought into this year. In football terms, Starks was getting stonewalled at the goal line with the refs about one second away from calling forward progress.

But as we know all too well, a lot can change in one year. Starks may not have come into this year with any expectations, but he's also showing up without something else. Injuries. Even dating back to his rookie year in 2010, where he spent most the year on the PUP list recovering from a shoulder injury sustained in college, Starks has been consistently banged up. Unlike Alex Green who suffered just one big injury (an ACL tear in 2011), Starks has been falling apart piece by piece with nagging knee, ankle, hamstring, and toe injuries limiting his playing time (and effectiveness) over the last three years. Either he's just really unlucky, or someone he pissed off has a James Starks voodoo doll and is taking him apart limb by limb. 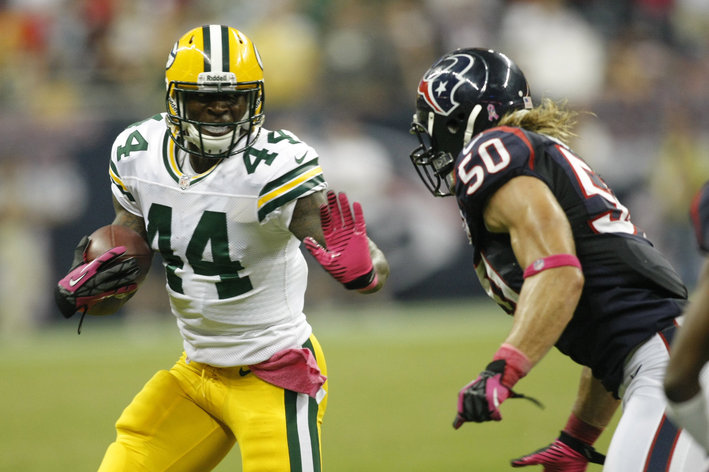 The bad news for Starks is that running backs who've spent half of their first three years on the sidelines generally don't turn into Emmitt Smith overnight. And with Ted Thompson drafting Franklin and Lacy (who from now, should always go by the nickname ‘Franklin & Bash'), Starks' leash for staying healthy now seems to be at the ‘If you stub your toe, you're cut' stage.

Starks however, does have some things working in his favor.

First, he looks like Adrian Peterson-Lite. *waits for people to throw their computers through the window because I compared James Starks to Adrian Peterson even though I didn't*.

Good now? Okay then. Seriously though, Starks on a regular day stands 6'2 and 218 lbs, and according to Tom Silverstein of the Milwaukee Journal Sentinel he came into camp in great shape. Obviously, plenty of backs look the part while failing to do much else, but anyone who's seen Starks when he's healthy knows how physically impressive he can be even among other superathletes. His long strides give his movement more of a kinetic energy than sheer explosion, building speed and power with seemingly every yard. Where backs like Maurice Jones-Drew are a cannonball, James Starks is runaway locomotive. And despite a leaner frame than backs like Lacy, Starks has shown he's capable of arriving with plenty of authority.

The other thing Starks has going for him is his experience-to-wear ratio. Lacy and Franklin might be the shiny new toys in the garage, but let's not forget they're rookies who are prone to rookie mistakes - something Mike McCarthy has to keep in mind when thinking of which back is least likely to get his most prized toy of all (Aaron Rodgers) killed by whiffing on a blitz pickup.

And while Starks' experience in the Packers offense puts him further along, his combined carries through three years in the league sits at only 233 - less than a season's work for most featured backs - meaning the tread on Starks even at age 27, is still remarkably fresh.

Should we read too much into Silverstein's tweets that Starks was the number 1 back yesterday, or that Starks has been, "one of the most impressive guys in camp?" Of course not, that would be, like, crazier than being glued to your computer over the weekend combing through training camp information.

But through three days, amid all the hype over new draft picks and the new car smell of other backs, the one that may very well emerge as the Packers starting running back could be the one who was here all along.