Scott Tolzien's deep throws earn special honors this week, as he connected on all four passes that traveled 20 yards past the line of scrimmage on Sunday.

The Green Bay Packers did not run too many plays on Sunday that were particularly memorable. However, the few nice plays that the Green and Gold ran on offense against the New York Giants showed great precision and accuracy by young quarterback Scott Tolzien, as he connected with a trio of wide receivers for big plays to move the ball down the field.

The first two big plays came on the Packers' first offensive series of the second quarter. On second and ten from the Packers' 18-yard line, Tolzien lined up in the shotgun. At the snap, he faked a swing pass to Johnathan Franklin before shifting his eyes downfield, seeing Jordy Nelson running towards the middle from the right sideline and in between three Giants defenders zone coverage. Tolzien set up at the 11 and threw a bullet to Nelson, hitting him in stride at the 40, and Nelson's momentum carried him an extra couple of yards for a 25-yard gain. Had Nelson been able to avoid a shoestring tackle by the oncoming Antrel Rolle, he might have taken that ball the distance.

Tolzien was just getting started with the deep ball, though, as the very next play allowed him to show off the deep ball again. This time it came from the I-formation, as Tolzien ran a play-action fake to James Starks and set to throw from the 35. He put great touch on a ball to James Jones, who was running a post route over the middle, and had beaten Prince Amukamara off the line. The ball was out in front of Jones just a bit, so he had to extend to catch it and fell down in the process, but it was placed perfectly at the 19-yard line so that the defender had no chance to make a play on the ball, finally touching Jones down at the 12 after he slid a few yards. That play went for 45 yards, and put the Packers in the red zone for the first time on the day.

Early in the third quarter, the Packers lined up in a third-and-seven from their own 23 when Tolzien struck again to Nelson. Lining up in the slot, Jordy worked toward the right sideline at the snap, avoiding a jam from Terrell Thomas at the line, and then cut upfield. Tolzien's throw from the 15 led Nelson perfectly yet again - and check out the ball placement at the point of the catch below. You can't make a throw much better than that. 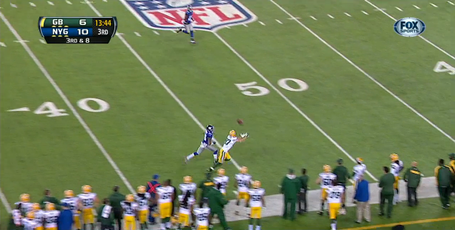 The fourth and final big throw of the day came on the first play of the fourth quarter, with the Packers down 20-6. This came off play-action once again, as the Packers lined up in a single-back set with Lacy in the backfield. Tolzien faked to Lacy, set, and once again hit his receiver perfectly in stride - this time Jarrett Boykin up the right sideline. I've pointed out the ball below to show just how perfect the throw was. 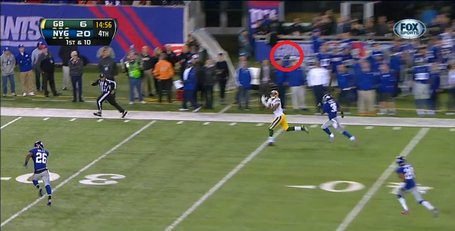 It's true that on all four throws, the receivers were able to get separation from the players covering them, but it's also true that on all four throws Tolzien put the ball in a place where only his receiver could make a play. Despite a trio of interceptions in the game, these great throws show the raw talent that Tolzien has and earns him honors for our Precision Plays of the week.

Test how precise your football knowledge is by playing the Precision Play of The Week for a chance to win Super Bowl tickets – brought to you by Gillette Fusion ProGlide, precision comfort, even on sensitive skin.