Tex gives some knee-jerk reactions to the Packers' performance on Sunday.

By now, you're probably coming down off the high of the Green Bay Packers' 38-20 win over the Washington Redskins on Sunday afternoon, but before you come down entirely let's look back at some of the great things that happened. I'll try to break down my initial reactions from watching the game live before we look back at the film this week.

I was massively impressed with how the Packers' OL handled the Redskins' front seven after about the second drive of the game. Those three sacks on Aaron Rodgers (two from Ryan Kerrigan and one from Brian Orakpo) seemed to be a wake-up call for Green Bay's big men up front, as they threw a clean sheet the rest of the day. I was also really impressed by their play in the run game - many times I noticed individual linemen dominating one-on-one blocks and allowing their teammates to disengage early and get to the next level.

Recapping the Packers' 38-20 Win over Washington 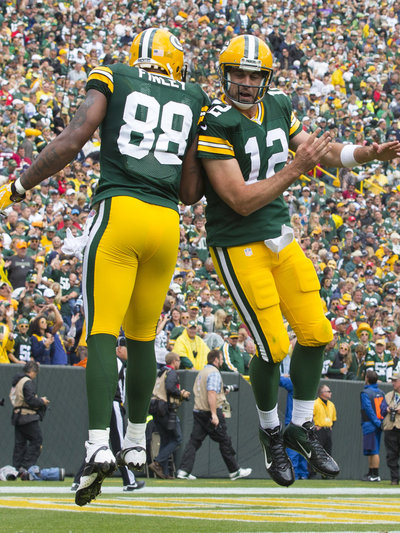 APC's Josh VanDyke runs down the major events in Sunday's game as the Packers evened up their record at 1-1.

Part of this was due to the big holes opened up by the line, but James Starks appeared to me to be as decisive and powerful as I've ever seen him. Considering one of the big criticisms I've put on him was his tentativeness and tendency to dance in the backfield instead of committing to a cut, I was extremely pleased to see him attacking the line of scrimmage and making tacklers pay at the next level. On his touchdown, he did a great job of anticipating the hole, following his tight end (who made a great seal block), exploding through the line, and making multiple tacklers miss in the secondary on his way to the end zone. After Lacy's injury early, it was a great sign to see such a great performance from Starks.

The Receivers Were Exemplary

As brilliant as Aaron Rodgers was in this game, his receivers made him look even better. According to Pro Football Focus, the Packers' pass-catchers recorded 280 yards after the catch. On 33 completions, that's an average of 8.5 YAC per reception. While Rodgers certainly put the ball on the receivers in places where they could make runs after the catch, they made a lot of tacklers miss on their own, and that was a big reason for Rodgers racking up the career-high yardage he did. Also: James Jones never left. He's still damn good.

For all the offensive awesomeness on display yesterday, the pass rush really disappointed me. Sure, the Redskins have a great left tackle in Trent Williams, but how does Clay Matthews not even really get a sniff of RG3 all day? On rare occasions, a blitz caused Griffin to rush a throw, (I'm thinking of the Brad Jones inside blitz and Davon House's sack) but I don't remember seeing a single play in the second half where he was under serious duress, nor did I see much pressure provided by a simple 3- or 4-man rush at any point.

What of first-round pick Datone Jones playing 18 snaps but not making any impact? In that second half, RG3 made a number of throws that would have frustrated Packers fans to no end if the score were closer. I'm concerned about a consistent pass rush moving forward, and want to see some substantial improvement next week against the Bengals.

What were some of your knee-jerk reactions to Sunday's game?